If you know me, you know how much I love Pretty Little Liars. I’m really sad that the show is ending soon but I still have like 8 episodes (7 after tonight’s) and I am going to be a wreck. But, I have had the whole book series sitting on my bookshelf since like January and I am finally getting to them. Now, who’s ready for another book review? I am and you better be! Just beware of these spoilers because they are going to be flowing like the secrets Ali tells. 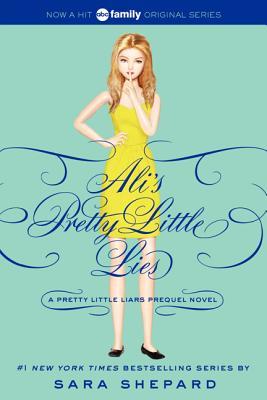 Perfect for fans of the #1 New York Times bestselling series and the hit ABC Family TV show, this Pretty Little Liars prequel novel reveals Ali’s secrets from before she was murdered. Rewind a few years to seventh grade: Alison DiLaurentis and her friends are the It girls of Rosewood Day. Boys want to date them. Girls want to be them. But even though they seem to have it all, these girls are hiding some major secrets–especially Ali. She knows better than anyone that if the truth gets out, it will ruin everything. Set in the weeks before Ali’s murder, Ali’s Pretty Little Lies is the first Pretty Little Liars novel told entirely from Ali’s point of view. After all, who better to tell her story than Ali herself, the prettiest little liar of all?

If you have been following me from the beginning and remember those really terrible blog post that are still published to this day, you would remember that I made this list of author’s I won’t read. Well, I included Sara Shepard in the list (but I also included Brandon Sanderson) and I don’t even understand why I included it. I also regret posting that because it makes no sense to me. But either way, I finally got to these books. Yes, this book did come out after the rest of the series but it happens first. But let’s just get to this review.

Seventh Grade. Alison thought that her life was going well, even though her family has moved her to Rosewood, Pennsylvania. The thing is, she has to keep her twin sister a secret. Her sister Courtney is the exact opposite of her. Courtney has been to several mental hospitals and is known to try to take Alison’s personality. So Courtney has constructed a plan to keep her from going back to a hospital; get Alison to go. Courtney has now became Alison and Alison has became Courtney. Will anyone be able to tell the difference?

This book set up the series so well, at least to me. I decided that I should read this one before Pretty Little Liars because it just happens before it. Hopefully, all these descriptions won’t be repeated all throughout the series because that would get really annoying. I loved how Sara Shepard set it up because it was so similar to the show but of course, there were several different things, including the addition of Ali’s twin sister Courtney. The book set up the whole disappearance of Alison, which leads into the whole series. And it was nothing like the TV Show, and I sort of like how the book does it instead.

I sort of found Alison/Courtney annoying, just like I did in the show. The character was developed nicely and has really good potential for the other book but I just don’t like her. I can’t go and say that the show put that in my mind because I don’t think I will be associating them together. Some of the things that they did I just didn’t like. I also found Aria a little annoying but I just couldn’t relate to her that much. Like Alison, she has a lot of potential for the other books but right now? No. Despite my annoyance with Alison/Courtney and Aria, I felt like the characters have been developed really nice and they hold such mystery within them that make me want to keep reading. Even though I know who was the other one when Alison/Courtney ‘fell’ into the whole, I still have a bit of suspense inside of me that makes me want to keep on reading the books.

The writing of the book did seem really young, but it was the description and the hope it gets better that kept me reading. I have to remind myself that the main characters in the book are in seventh grade and they are trying to discover themselves. The book was suspenseful and kept me wanting to read more the farther I read. Plus, I really want to get to the parts of the book series that includes my boyfriend Toby (even though I spoiled myself on accident about what happens to him in the second book). Currently, I would say that I am not a big fan of Sara Shepard’s writing but it is the first book of her’s that I have read and the characters are like 11 or 12.

Overall, I would have to give this book a 3 out of 5 stars. It was an okay book and it made the series come to life to me. I still want to continue on with the series because I want to know what happens next! Plus, I really want to compare the show with the book and see how different it really is. Based on what I have read already, it seems to be completely different already. It has also brought some new ideas in my mind about some of the stuff that has happened in the show. If you are a fan of the show, you might want to take a peek at the books when you get the chance.

Have you read this series? What were your thoughts about the series? Did you like the show or the books better? Did you enjoy this book when you read it? Who is your favorite character? Let me know your thoughts in the comments!