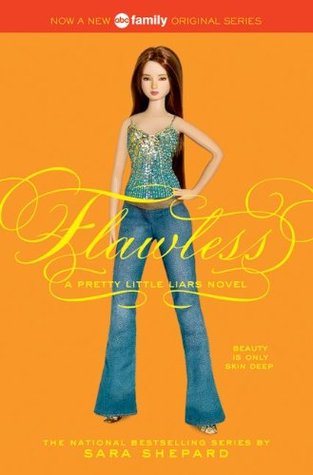 Spencer stole her sister’s boyfriend. Aria is brokenhearted over her English teacher. Emily likes her new friend Maya . . . as much more than a friend. Hanna’s obsession with looking flawless is making her sick. And their most horrible secret yet is so scandalous that the truth would ruin them forever.
And why shouldn’t I tell? They deserve to lose it all. With every crumpled note, wicked IM, and vindictive text message I send, I’ll be taking these pretty little liars down. Trust me, I’ve got enough dirt to bury them alive.

I’m really not sure if I want to continue this series or not. I keep reading more and more and nothing is really interesting me. I think one of the reasons that I keep reading is the fact that I have so many questions and I am wondering how different the show is from the books but other than that, I don’t know.

After finding out the Alison DiLaurentis has been murdered three years ago, Hanna Marin, Spencer Hastings, Aria Montgomery, and Emily Fields have no idea who A might be. Now, Toby Cavanaugh is back and he might be the one who is playing the role of A. But after one of the girls get along with Toby, will that girl be able to change the minds of the others? Will the Jenna thing actually come out? What else is Toby hiding from everyone?

Compared to the last book, the writing of this book seemed to be a little childlike to me. I understand that yes, Toby is back and the girls are trying to figure out who killed Alison, but it felt like it was being dragged on forever and there was nothing really holding the story together. There was so much drama in it as well, some good and some bad. Toby getting close to Emily while Emily and Maya were getting close? That was some good drama. A real good example of bad drama was the whole thing with both Hanna and Kate AND Hanna wanting to get back together with Sean, even though Sean have gotten with Aria. It felt so middle schoolish even though these girls are supposed to be in like 11th grade.

I felt like I only connected to one character through the whole story. That doesn’t mean I didn’t like them. It means I just understood one of the characters. Ms. Spencer Hastings? Will you step up? I totally get where Spencer is coming from with writing all these papers and having to fend her spot in her class rank. Even though I am not number 1, I am still in the top 10%, which is already a little difficult. I have all these things running around in my life and I have no clue what I am doing anymore. No, I have never stolen a paper from my older sister, mainly because I don’t have an older sister, but because I feel like I would get caught. The characters did seem to have the same storyline and seemed to get a little better than what they were before. They are leaving me with questions about certain things, which is one of the reasons I sort of want to start the next book.

Can we take a moment and grieve over the loss of my boyfriend, well TV boyfriend Toby? In the books, I hate to say it, but I actually kind of liked Toby. I know, Toby did force Jenna onto him, which is total opposite from the show (Jenna wants him), but he was sort of sweet. He cared so much for Emily and it sort of looked like he would have taken a bullet for her if he had to. I do hate the fact that he had to go and kill himself by overdosing in Emily’s backyard because I was sort of hoping that this Toby and Spencer thing would have happened in the books as well because I love these two together. I guess that is never going to happen. Even from the beginning, I never suspected that he did anything to Alison because he was sort of weird. Plus, why would he be hanging out with Emily if he did? Plus, I spoiled myself from the very beginning because even before I bought the books to read, I sort of found out that Toby was going to die. I sat in a dark corner for a while like I did when I found out something Toby was doing in Season 3, Episode 10.

I felt a little weird while I was reading certain things, especially if it included Mona in it. Mona felt a little strange to me. I know in the show that she is the first A and in the books, I am sort of getting the same vibe. It just so happens that Mona wasn’t there when Hanna would get a text? Or the fact that Hanna was told about Sean with Aria? Or the fact that HANNA WAS THE ONE RECEIVING THE LEAST AMOUNT OF A STUFF DURING THE WHOLE THING? *I already got my ranting out of the day so I have no clue where that came from* I could be wrong since there are a million other characters in the books that aren’t in the show and the fact that Ezra and Aria aren’t really hanging like they did before, that sounds a little fishy to me as well. I guess since Ezra might have this girlfriend in New York and Aria now has Sean, I guess it makes sense.

Overall, I would have to give this book a 3 out of 5 stars. I wouldn’t say the book was bad but I wouldn’t say the book is good, sort of what I said for the last book. I do really like how close they got the first season to with this book and the first book. I mean they have their differences, like the fact that Spencer is supposed to be blonde, but overall they did a good job. I think I am going to give this series up until like the fifth book or so to see how I feel about it. If I don’t like it by then, I’m giving up on it. I guess we will have to wait and see. I will say that these are very fast, quick reads for me and that is another thing I really like about them.

Have you read this book? What did you think about it? Who is your favorite Pretty Little Liar? How often do you rant? Did you enjoy the show or the books more? Let me know your thoughts in the comments!