I think that I am starting to warm up to this series. At first, with Ali’s Pretty Little Lies, Pretty Little Liars, and Flawless, I was not a big fan of them. I thought the books were okay but now, I am finally really getting into these books and I am happy that I gave these books a chance. So, welcome to my next book review! Just please be aware of these spoilers that may or may not come out. 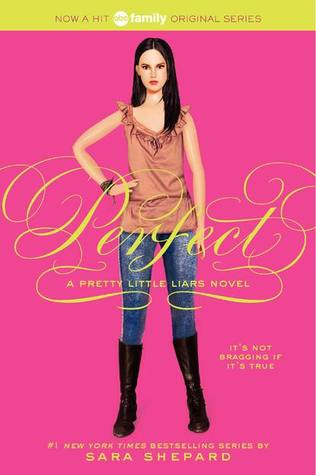 IN ROSEWOOD, PENNSYLVANIA, FOUR PERFECT-LOOKING GIRLS AREN’T NEARLY AS PERFECT AS THEY SEEM.
Aria can’t resist her forbidden ex. Hanna is on the verge of losing her BFF. Emily is freaking out over a simple kiss. And Spencer can’t keep her hands off anything that belongs to her sister.
Lucky me. I know these pretty little liars better than they know themselves. But it’s hard keeping all of their secrets to myself. They better do as I say… or else!

Like I said earlier, I think this has been the best book in the series. I devoured this book. I wanted to read the day away and not have to worry about school work. But of course, that didn’t happen but in my mind, that happened. Anyway, I think I am really excited to see where else this series goes and I want answers from this book!

Now, Toby Cavanaugh is dead and A is still around. Emily Fields, Spencer Hastings, Aria Montgomery, and Hanna Marin have no idea who A might be now. But A is now coming back and getting revenge on all these girls. Some secrets that these girls thought were protected might not be anymore. Emily has to deal with her mom and Maya. Spencer has to worry about everyone finding out that Melissa wrote her paper. Aria is dating Sean even though she is having feelings for her English teacher. Hanna doesn’t know who all to trust anymore. Will these girls be able to figure out who A is before A comes after them?

The writing of this book seemed a hundred times better than all the other books in the series. It sounds so clique but these books seemed to get better through them. I felt like I was watching the show through the book and I was hanging onto these pages for dear life. And can we talk about these descriptions through the whole book? I felt like I was there the whole time! The way that Sara Shepard described the hot air balloon and Mona’s party, god. I wish that I was there. Something happened from the second to the third book that made these books amazing.

I fell in love with almost every single one of these characters. For some strange reason, I wanted to get rid of Maya. I wish that she would get the same plot line as the show because she is just so annoying! I like that she is trying to get Emily out of her comfort zone but she is always there! Maya wants to be there any time that Emily is and tries to do the strangest things. I wasn’ the biggest fan of Hanna either but she is the only one who knows who A is since she had the unblocked number text her phone. I actually think that Spencer knows something more than what she is letting on because she was acting weird when Hanna got hit by the car. Plus, she has the whole memory lost thing.

I don’t like the whole thing that includes the whole turning Emily back to her normal self. It’s kind of hard to hide your true self and that is what Emily’s parents wanted her to do. I sort of expected the whole thing to go wrong but the whole thing was unnecessary for the book and it really doesn’t make sense to me. I’m really intrigued to see what Emily does to keep her love life a secret from her parents.

My favorite part in the whole book was when the cops come and arrest Ezra Fitz while he was sleeping with Aria. A had contacted Sean and told him about their love. So in revenge, he called the cops and now Aria is homeless since she can’t go home and Sean won’t let her come back. I don’t like Ezra at all, in the show or in the books. He’s a little disgusting to me. So now he is getting arrested and I am so happy. I sort of want to know what happens to him and if he will be in any of the other books in the series.