I didn’t think that I could be ahead in my Goodreads Challenge by like 9 books but I am. I keep adding more and more books to my completed pile and more to the TBR. Anyway, I check off yet another book from my TBR from the beginning of the year. Even though I know how Season 1 goes in Pretty Little Liars, I started the series. It might be because of the death of a character in a recent episode of PLL that got me really happy but I finished half the book in one period. So, welcome to my review and please take a seat. Just watch out for the killer spoilers. Make sure that you check out my review for Ali’s Pretty Little Lies because there might be a few spoilers within here. 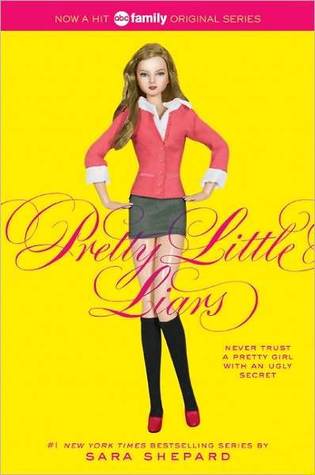 Everyone has something to hide-especially high school juniors Spencer, Aria, Emily and Hanna.
Spencer covets her sister’s boyfriend. Aria’s fantasizing about her English teacher. Emily’s crushing on the new girl at school. Hanna uses some ugly tricks to stay beautiful. But they’ve all kept an even bigger secret since their friend Alison vanished.
How do I know? Because I know everything about the bad girls they were, the naughty girls they are, and the dirty secrets they’ve kept. And guess what? I’m telling.
-A

It’s been three years since Alison DiLaurentis disappeared. Three years since Aria has been in America. Three years since Hanna, Spencer, Aria and Emily were good friends. Now, they are back and Alison might be as well.  These girls have complicated lives already so when they begin to get text and emails from a mysterious “A”, their mind goes straight to their possibly dead friend Alison. But what if it wasn’t?

I’m actually sitting in my Physical Science class, writing this since we didn’t have anything to do after a test and plus, I finished the book earlier. I thought I would write that because my teacher just said he would find anyone who hurts his daughter’s heart. Anyway, I thought the book did a great job explaining the characters, the setting, and the whole plot. I did feel at times I was reading the same thing from Ali’s Pretty Little Les but this is the first official book. There are things I’m still wondering about each of the characters and how certain things end up going. The characters seemed to be better than the previous book since they went from 7th grade to 11th grade in a matter of a book. They were finally coming true to their true self and I was really happy about that. I do wish that Mona was a bigger part of the book but she was just Hanna’s best friend. I felt like she had a lot of potential in the book compared to what was in the book.

When comparing the book to the show, I would like to say they did a good job catching the main ideas. I wish that they would have added the bathtub in Ezra’s living room and I wish the whole cave part with Maya and Emily was real. The book though, it seems to still be a lot better than the show because I actually find it more entertaining. Plus, when Hanna takes Sean’s car, she races a Porsche (it’s my dream car) but in the show, it doesn’t happen. All Hanna does in the show is crash the car.

I felt like this book was written and constructed a little better than before. The girls are in 11th grade and they are now facing real life issues. The book deals with so many issues, both mentally and physically. Emily’s mom is racist and Hanna has an eating disorder. Divorce, love, death, self-discovery and friendship all play a part in this book. If you don’t think you could handle one of the topics, I would recommend you not read this book. Even though these don’t happen a lot, these topics come up and they might be a little graphic for the reader. These parts of the books can not be skipped because it makes the characters who they are.

Like the show, I felt like I had a personal connection with each of the characters in the book. I think this is one of the reasons I enjoyed reading it a lot. The characters seemed so real and I felt like I was a friend. Even though I never dated a teacher, who says I haven’t liked one before? Haven’t we all? Or needed to feel like I need to be the best? Each reader will be able to connect to something and possibly learn something.

Something that irked me a lot was the fact that these girls thought Alison was the answer to everything. When they first started getting the text from ‘A’, they all thought it was Alison. I understand that Alison was the person that brought these girls together and that she has been missing for three years but they were like obsessed with her. It seemed like Emily was the worst of all. Yes, Emily was in love with her but to Emily, Alison wasn’t in love with her. Through the whole book, it seemed like Alison was holding Emily back from breaking up with Ben and getting with Maya. The fact that Maya lives in Alison’s old house, and in the same room, doesn’t help Emily at all. After three years, I would have thought that these girls would have given up to hope and sort of forgotten about her. I might just be saying this because I still don’t like Alison but who cares! I thought Alison was sort of stuck up and annoying anytime that they brought her name up.

Overall, I would have to give this book a 3 out of 5. The book has left me for wanting more but I don’t feel like I need to go and read the next book right now. The book was written in an easy and light sense that made the book fun to read. I felt like the cover of the book is a little creepy but that might just be me. Who would want to read a book with a doll on it? That’s one of the reasons I really wanted to get the TV Show covers. If you are a fan of the show and you have been wanting to check out the books, you totally should. You will feel like you have a personal connection with them all and you know some of the stupid little details about them. Just don’t get your hopes up when it comes to the book being just like the show. They only pull the main idea of the book to the show.