I hate trying to find a routine through the summer. With my family, you never know what days you are going to be out of the house or who might be coming over. But since it is approaching two weeks of my summer break gone, I think I have gotten in the hang of a schedule. This schedule seems to work for the past two days since it is one of the reasons I was able to get through this book. Welcome to my first review in a few weeks for Killer and you might be seeing a few spoilers through the review. 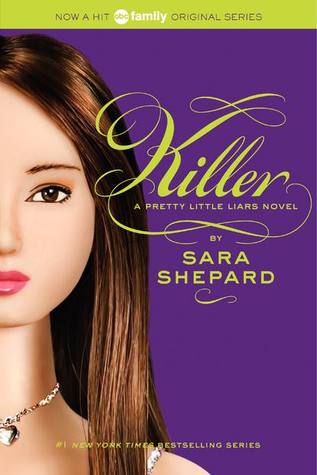 In picture-perfect Rosewood, Pennsylvania, ash-blond highlights gleam in the winter sun and frozen lakes sparkle like Swarovski crystals. But pictures often lie—and so do Rosewood’s four prettiest girls.
Hanna, Aria, Spencer, and Emily have been lying ever since they became friends with beautiful Alison DiLaurentis. Ali made them do terrible things—things they had to keep secret for years. And even though Ali was killed at the end of seventh grade, their bad-girl ways didn’t die with her.
Hanna’s on a mission to corrupt Rosewood’s youth, starting with a very attractive sophomore. Aria’s snooping into her boyfriend’s past. Spencer’s stealing—from her family. And pure little Emily’s abstaining from abstinence.
The girls should be careful, though. They thought they were safe when Ali’s killer was arrested and A’s true identity was finally revealed. But now there’s a new A in town turning up the heat. And this time Rosewood is going to burn.

Hanna Marin, Aria Montgomery, Emily Fields, and Spencer Hastings thought that they saw Ian Thomas, the person who they thought killed their best friend Alison DiLaruentis, hung on a tree dead. By the time the cops came and tried to fix the problem, Ian’s body is gone. All the girls but Hanna have been receiving messages from A still even though Ian is dead. With this Radley party coming up, will new problems with these girls personal lives get worst and will A take a stand?

I sort of have a problem with reading this book for some reason. The problem you ask? I have no idea. I just didn’t find most of the book entertaining as the other books have been. I would have thought that Spencer would have been smarter than that by paying the man before she even met the man. I knew the man was a scam as soon as we met Olivia. Olivia was just sort of out there and she seemed a little too young to be a mom. Then we have Kate in general. I understand she is supposed to be written as the unwanted stepsister and all but she acted so young. Everything she did was something I saw nine year olds do when they don’t get their way. The characters seemed a little young in the first place through the whole book anyway, which hasn’t really happened in the series for a while.

The writing of this book was sort of a let down. While I was reading the book, I sort of felt like Sara Shepard was a little tired of writing so she really didn’t care as much about this book. I’m not saying it was terrible. I just didn’t like it. I felt the characters were young and there were some pretty stupid things that occurred through the book. I liked the mystery behind the girls trying to find Ian’s body and find out if he was truly dead. I also really liked how Jason told Aria no as soon as he was told about the Radley Party and how Aria kept wanting to get answers. I also really like how Alison has no magically appeared where she did. I just got tired of the whole flag story that was almost included in every chapter that Aria was in. Mike is turning into a f-boy because here he is with both Hanna and Kate, which I didn’t like at all.

It was pretty easy to follow the story through the book even though there were many problems with the book. I understand where Sara Shepard wants to go with the story. I have the feeling that since Alison has came back, the girls will be learning about the twin. I also have the feeling that Alison will automatically think that the girls are still best friends even though she secretly knows everything that has happened. I just wished the book went a little faster since it felt like it happened in two days. I did understand everything that was happening through the book at least and that is a very important step in reading a book.

Overall, I would have to give the book a 3.5 out of 5. It wasn’t the best book in the series but it wasn’t the worst. It could have been a lot worst but also a lot better. If the next few books in the series are similar to this book, I think I am going to have to give up on this series. But I will be giving the next book a try just to see what it is like. I actually wished that some of the events that happened in this book were actually included into the show.

Have you read this book? Who do you think is the new A? What did you think about Alison’s return? Are you watching the current season of Pretty Little Liars? Did you enjoy the books or the show better? Which of the girls is your favorite liar? Let me know your thoughts in the comments!