It’s crazy that a certain genre can take a few hours to read and other genres can take me a week. I think that there are some crazy things out there in the world and that is one of them. Well, I finished another book and I’m now ahead of my Goodread’s challenge by like 12 books again. I don’t know how that has happened since I was so behind on last years and I have never finished one (at least I don’t think). Any who, let me present to you another review, which you will find spoilers contained in the mix because that is just how I’m feeling. Plus, I don’t know how to not contain spoilers for this book. 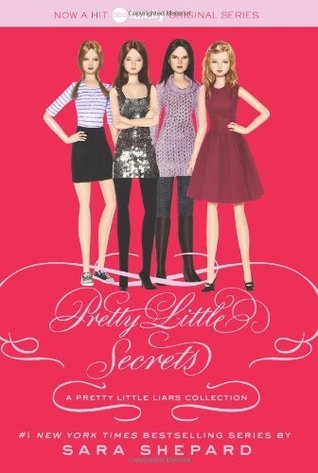 Rewind to junior year in Rosewood, Pennsylvania, to a winter break no one has ever heard about…
Fat snowflakes fall onto manicured lawns, quilted stockings hang over marble fireplaces, and everyone is at peace, especially Hanna, Emily, Aria, and Spencer. Now that Alison’s murderer is in jail and A is dead, they can finally relax. Little do they know there’s a new A in town…
Rule number one of being an effective stalker: Get to know your prey. So I watch these liars day and night, keeping an eye on the trouble they get into, the messes they make, and the secrets they keep. Hanna’s desperate for a very personal session with her gym trainer. Emily is number one on Santa’s naughty list. Aria’s old flame from Iceland is about to land her in hot water. And Spencer’s resorting to some backhanded tactics to get what she wants.
What happens on holiday break stays on holiday break – right? But guess what. I saw. And now I’m telling.
-A
Taking place between UNBELIEVABLE and WICKED, Pretty Little Secrets is a very special Pretty Little Liars tale revealing the liars’ never-before-seen misadventures over their junior-year winter break.

Aria Montgomery, Hanna Marin, Spencer Hastings, and Emily Fields are excited to be going on Winter Break. They thought that their problems with A were gone but little do they know that there is a new A. And there is no way that that A was not going to have some part in this break. Follow these liars on their break and find out some of their fun Christmas adventurers.

I liked how the book was set up since it wasn’t a whole complete book, if you know what I mean by that. The book was set up with each of the four girls getting their own section. And I loved how they all somehow connected. I know, if you have read the book, you might not have noticed it but the vitamin water that was in Hanna’s story was put into all the other ones. I know, crazy! I do think my favorite story was either Hanna’s or Spencer’s. I’m not saying that the other stories were not interesting but I just liked their’s better. Hanna’s sort of started the whole book off and made the book a lot of fun to read. Spencer’s was a great way to end the story. I had some trouble getting through Aria’s story just because it was really random and it was a little crazy.

The pace of the book was really well and it made reading the book really fun to read. Other than Aria’s, I really didn’t struggle to have interest in the book. I loved Hanna and her battle with the gym teacher and the other gym member. When Emily decided to call out the fact she ‘saw’ a bed bug in her beard, I couldn’t help but laugh. The one thing that I really liked about Aria’s story was the whole thing concerning the animals getting loose in the town and the fact that Aria secretly marries and divorces a crazy man in the matter of one hundred pages. Spencer and Melissa crack me up any time that they are together in the first place so I was laughing a lot.

The writing of the book was pretty interesting and it kept me wanting to read more and more. I wanted to know what is going on in the next page and how the character was going to end up. When I was reading Aria’s, I wanted to know what the reason that man was really doing in America. During Spencer’s, I needed to know about her and Collin’s. Also why Alison’s mom was in Florida at the same time as Spencer’s family. I have the feeling that was where Spencer’s dad was spending so much time at. I laughed, I cried, I wanted to throw it against the wall. Isn’t that what a book is supposed to do?

I do recommend reading this book between books four and five just because it takes place between and it gives a little insight how they spent a little break from school. It also adds to the characters and makes me like some even more, like Lucas and I can’t believe I am saying (well typing) this but Meredith as well. I haven’t been Meredith’s biggest fan but she seemed a lot more interesting because she spent more time in the bathroom than talking. The characters are progressing really nicely, even though they have their moments. HINT HINT to Hanna when Lucas’s travel buddy came to his house. Every book I read, the characters get better and better, and the books grow more and more different from the show. I just don’t want to compare the show and books to each other because they are just so different.

Overall, I would have to give this book a 4 out of 5 stars. The book was fun, light, and easy to read like the other books in the series. There are things you aren’t going to be expecting and that can end up being a real good thing. The characters are great, the plot was good, and the writing really does get better with every book I read in the series.