Welcome back! I’m slowly making my way through the series now. For the near future, beware of all the book reviews that are related to this book series because they are finally getting read. With Spencer, Hanna, Aria, and Emily still in my head, nothing could go wrong today. So, let me brighten your day and bring you a spoiler free review of book 8 of Pretty Little Liars series, Wanted. 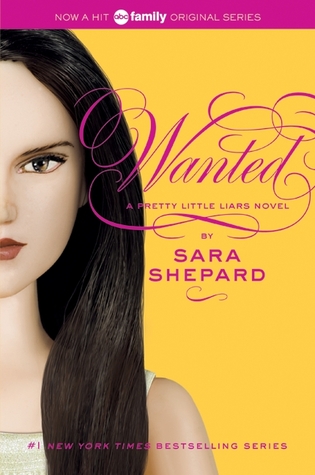 In Rosewood, majestic estates sprawl for acres, and Tiffany toggle bracelets dangle from every girl’s wrist. But not all that glitters is gold, and the town harbors secrets darker than anyone could imagine—like the truth about what really happened the night Alison DiLaurentis went missing. . . .
Back in middle school, Ali plucked Emily, Hanna, Aria, and Spencer from obscurity and turned them into the beautiful, popular girls everyone wanted to be. Ali was the best friend they ever had. But she also made them do terrible things and taunted them with their worst secrets. Now, three years later, all their questions about Ali have finally been answered and they can put this awful chapter of their lives behind them. Or so they think.
Not every story has a happy ending, especially when four pretty little liars have done so many wicked things. In the dramatic conclusion of Sara Shepard’s bestselling Pretty Little Liars series, Emily, Hanna, Aria, and Spencer could get everything they’ve ever wanted—unless A has one more horrifying twist in store.

Aria Montgomery, Emily Fields, Spencer Hastings, and Hanna Marin all thought their problems with A were gone. The cops found someone who they believe killed Alison Dilaurentis and Jenna Marshall. And the four Pretty Little Liars believed it too since A has stopped harming them. But now after years of not knowing about Alison’s body, Alison’s mom drops a bomb on these four girls and the rest of the world. With all that these four girls need to worry about in their own personal lives, what will this new information lead them to.

Hands down, this has to be my favorite book in the series so far. It was far more exciting, adventure filled, and leaves you second guessing everything. There were moments where you know what was going to happen next but that is almost every book you read. I was more entertained in the book and I really wanted to sit there and know what was going to happen next. All the other books in the series haven’t been as fun to read like this one.

I LOVED THE CHARACTERS IN THIS BOOK. It has been a little while since I last read a book with characters this good. The characters didn’t seem as stuck up and annoying as before. Hanna, Emily, Spencer, and Aria actually have some bigger developments coming their way, which have been missing from the plot for a while now. The past few books, the characters really hadn’t seemed to grow with all that has happened to them and now it is starting to catch up to them.

Sara Shepard is still not my favorite author. Her writing is still very elementary and not very developed but you can see her growing within the books. Sara Shepard isn’t one of those authors I would go and buy automatically because I’m not a big fan but if her book was on sale or she was doing a signing close to my home, I would totally go and meet her. I just don’t like the fact that I feel like I am reading the same thing over and over again. She goes on and basically explains the same story at least three times and they always seem to change in some sort of way. Has she ever heard of copy and paste?

I don’t want to say this but I sort of wish the series ended here. I know that this was supposed to be the last book in the series but then they went and added more. I mean the ending of the book was sort of set up for another two or three books but the rest of the book brought so many more answers about Alison and A. It brought answers about Ian. So many things were answered that I have no idea where the rest of the series is going to go. Part of me wants to continue on with the books but part doesn’t.

The pace of this book seemed totally different than the other books and I have no idea how I feel about it. Things didn’t seem too stretched out but other things felt like I wanted more detail. There were certain things that happened that I felt like Sara Shepard could have removed because they just didn’t make sense in the book. There were other things that I wish where added because there were times that I was a little confused but I can’t be the only one that thinks that.

There were times that I was reading the book where I wished that I hadn’t gone and read Ali’s Pretty Little Secrets since I knew all along some of the things that happened in the book. SO I DO RECOMMEND YOU READING THIS BOOK WHEN IT WAS PUBLISHED, NOT SINCE IT IS BOOK 0.5. If you don’t want to go through the whole series holding onto this big spoiler and wondering when something was going to happen, do not read it. I am kicking myself for reading it now.

Overall, I would have to give this book a 4 out of 5. So far, it has to be the best one in the series. I was beginning to have my doubts about this series but after this book, I don’t know anymore. I still feel like I am reading the same thing but it is a lot better. Sara Shepard still isn’t one of those authors I would make my way and buy her books full price yet. I’m still a little hesitant about the next eight books though.

Have you read this book? What did you think about it? What is your favorite book in the series? Have you read any of Sara Shepard’s other books? Let me know your thoughts in the comments!