I’m finally getting into this series. I was enjoying my time reading the books but I am finally wanting to read more and more of the books. Since I’m finally getting into the series and I just found out who A is in the first part of the series, I thought I would waste some of your time and make you read this SPOILER book review. Beware of spoilers from the previous few books along with spoilers in this book so check those reviews out as well. 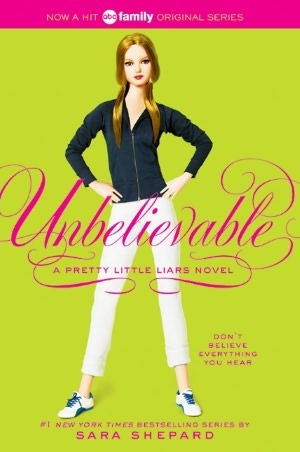 FOUR PRETTY LITTLE LIARS’ CHARMED LIVES HAVE TURNED INTO LIVING NIGHTMARES.
Emily’s been shipped off to Iowa to live with her überconservative cousins. Aria’s boyfriend is behind bars – because of her. Spencer’s afraid she was involved in Ali’s murder. But Hanna’s fate is far worse: She’s clinging to life in the hospital because she knew too much.
If these girls don’t start listening to me, Hanna’s going to look like the lucky one. -A

Hanna Marin has just been hit by a car, possibly driven by A themself, and ex-best friends Spencer Hastings, Emily Fields, and Aria Montgomery were there to see it. A had to keep Hanna from revealing their identity to the other girls. Well, I guess A gets off the hook since Hanna is in a coma, Spencer is worried about her Contest Cheating, Emily has been shipped off to Iowa, and Aria has no idea where she should go since Ezra has been arrested. Will A be able to keep these girls from revealing the secrets to the police or will they get to the girls before they can do anything?

The one problem I have had with the whole series is the fact that there is a lot of explaining and backstories over and over again. It’s like every time I get to an Alison scene, I have to be re-explained about the whole situation. I understand that you might have questions but by the fourth book, you should know what is going on by now. I just wish that there was less old knowledge in the book that I had to go back and read through the book.

I felt like this was the best-paced book so far in the series. I didn’t feel like the day was being way too stretched out or was way too short. I did wish that Emily spent more than one day in Iowa but I guess that wasn’t my pick. I liked how to story was told when Spencer was trapped in the car with Mona, aka A. I felt like I liked how the book had the girls figure out who A was better than the show. I felt like the one in the book showed Spencer’s true strength and I am pretty sure that Mona is now dead.

The writing of a book should keep a writer interested until the very next page and leave them begging for more when it ends. Did this book do that for me? For the most part, yes it did. I need to know when these citizens are going to figure out the connection between Alison and her sister Courtney and I need to know when Maya is going to be disappearing. I mean, Maya and Emily are already sort of broken up but I just need Maya gone. I don’t like her at all. I don’t like Maya’s personality and she is just was too annoying. She thinks that she should be the center of attention and it seemed way too preppy right now. I kept wanting to know who the real A is and what Melissa was up to because she was all over the place. I did figure out that Meredith was pregnant from the first moment that she was complaining of the stomach problems. She’s been living with Bryon for like a while now so you don’t think I had some suspicions.

The characters seemed to be different in a good way through the book and I liked it. Because of the whole A situation, I would grow up too. Through the first few books, I felt like the characters were just so childish and they really weren’t acting like they were in high school. In this one, they seemed so mature and it might have been because of the things that went through. They had Hanna in the coma, Emily running off, Alison’s situation, and Aria and her love problem. I found a way to connect with each and every one of them, which wasn’t a bad thing. Hopefully, this maturity of the characters stays through the rest of the books because that would be terrible if they don’t.

Overall, I would have to give this book a 4 out of 5 stars. The book was really exciting and the book had really good moments of shocking reveals. I need to know more about Jenna and Jason, along with the girls. This was another quick, fun, light read that I don’t regret reading. I’m really excited to read the next books in the series!