Even though Pretty Little Liars has ended, it doesn’t mean that they have left my heart. I am still working on the book series, which for some reason is taking me forever to read, and I have finished another one of the books. By the end of summer, I want these books to be read but at this rate, who knows. Any who, welcome back to another review for book 7 of the series, Heartless. Don’t worry about being spoiled because I’m leaving those out for now. 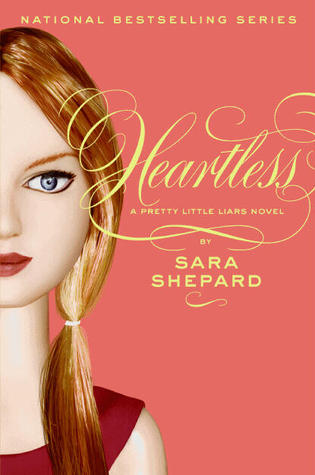 Four gorgeous girls are telling very ugly stories.
First Emily, Aria, Hanna, and Spencer claimed they found a dead body in the woods behind Spencer’s house, only to have it vanish without a trace. Then, when the same woods went up in flames, they swore they saw someone who’s supposed to be dead rise from the ashes. And even after all that, the pretty little liars are still playing with fire. Call me heartless, but it’s about time someone shut these liars up for good. After all, nobody likes a girl who cries wolf—least of all me.

Aria Montgomery, Spencer Hastings, Emily Fields, and Hanna Marin thought that they saw their dead friend Alison Dilaurentis when someone burned down Spencer’s farm house. Since Emily couldn’t keep her mouth shut, the whole world now calls these four girls the Pretty Little Liars. As Aria, Spencer, and Emily attribute seeing Alison to smoke, Emily swears that she saw her. Now as their lives try to get back to normal, A is ruining their lives but might also be helping them at the same time.

I’m beginning to feel like I am reading the same thing happen over and over again. The characters are beginning to change and going places in life but these books really aren’t. There was an A. Her name was Mona. She is now dead. Magically, there is a new A. It is who knows who. The same characters are being blamed and these girls don’t want to think anyway. Plus, they are basically letting A control their own life. I mean A is controlling and all but they basically believe anything that they are told by A. And after a while, it gets a little annoying.

The writing is still pretty good. There are these little points in the story that makes me want to continue on and finish the book. But these little points could be googled easily. I don’t really know if I am a Sara Shepard fan yet because I feel like I am reading the same thing over and over again but I would read it. If I was asked to either read a Sara Shepard novel or The Book Thief that would be a little toss up because I really hated The Book Thief. Sara’s writing just doesn’t have anything special to it.

Like all the other books in this series, it is pretty easy to follow the story line. You get to enjoy trying to figure out who is Ali’s real murderer and try to figure out how all these different and new characters play a part. You also get to take a try at figuring out who the new A is, which for the record, I still have no idea who it is. I don’t even have a guess yet. That’s one good thing about these books. You don’t have to go back and reread the same chapter over and over again because you are confused. But I do feel like I want to skip to the back of the book and just read the end of it because I am so bored.

As I said earlier, the characters are going somewhere and it keeps making me want to read more and more. I love that Hanna is now at a mental hospital, which is the same one that Alison went to in Ali’s Pretty Little Lies and is dating Mike, Aria’s brother. Aria is trying to figure out everything that has happened with her between Jason, Alison’s brother. Spencer tells her parents about Olivia and she begins to find out the truth between the relationship between the Hastings and the DiLaurentis. And Emily is trying to figure out why going to an Amish town was going to make Emily feel less crazy for seeing Alison in the fire. There is so much potential in all four of these girls and I really appreciate it. If there was one thing Sara Shepard was good at, it is creating characters.

I would have to give this book a 3 out of 5. Like I said before, I feel like I am reading the same thing over and over again but I am going to give the next few books a try. If I don’t get back into the story after two or three more books, I’m giving up on them. I’m just really not feeling these books anymore. But if you are loving these books, or you did, all the power to you.

Have you read this book? What did you think about it? How did you feel about Pretty Little Liars ending a few weeks ago? Who is your favorite liar? What is your favorite book in the series? Who is one character from the book you wish was in the show? Let me know your thoughts in the comments!