Last week, I watched the movie Taken and after watching it, I really wanted to watch the second movie and maybe the third one. I thought that since I really liked the first movie that I would like the second one. Quite honestly, it was a little boring and stupid to me. Before you read on, if you have not watched the movie for Taken or Taken 2, beware of spoilers. If you want to check out my review on Taken, check it out. 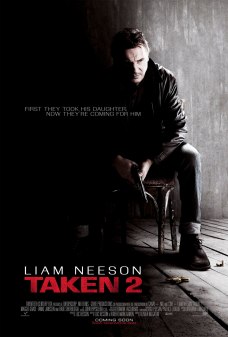 Two years ago, retired CIA agent Bryan Mills used his “particular set of skills” to rescue his daughter, Kim, from kidnappers. Since then, Kim has been learning self-defense from her father, and Bryan has been on a personal mission to reunite with his ex-wife. In Istanbul, Bryan and his family cross paths with Murad, whose son died at Bryan’s hand during Kim’s rescue. Murad wants revenge, and he’ll stop at nothing to get it. 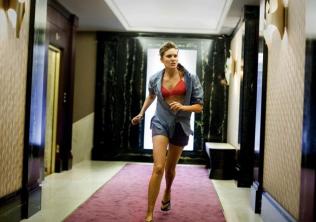 There was one part of the movie where I just kept saying, “she doesn’t have her shoes on” because she didn’t have any shoes on. While Lennie and Bryan were on their ‘date’, they get kidnapped by one of the father’s of one of the men Bryan killed. Bryan calls Kim that the two of them are going to be taken and that some men are going to be after her. Kim hides well enough that neither of the men are able to find her. She gets up on the ledge of the building, taking her flip flops off first, and goes into the next room. Bryan tells her to go into the suitcase with all of his weapons and to set off a grenade so he can calculate where he is. After Kim and Bryan decide where Lennie and Bryan was, she goes running after them. This whole time, she still doesn’t have her shoes on. It isn’t until she steals someone else clothing that I think she puts on shoes but they never show that.

Unlike the first movie, I really liked Kim. Kim was more confident, daring, and less annoying than last time. In the first movie, the main reason I didn’t like her was the fact that she was so stupid to follow a band around on their European Tour. Kim was part of the reason that Lennie and Bryan were able to escape. Kim remained calm for most of the movie, unlike I would be if my parents were taken by people that want to kill me. Kim was learning to drive during the whole movie, and I was shocked that the director actually included that in parts of the movie. In the beginning of the movie, Bryan goes to pick up Kim to teach her to drive. At the end of the movie, it shows Kim getting a perfect score on her drivers test. While helping Bryan escape and find Lennie, Kim was driving like a lunatic around the country. Kim really was older and wiser in this one, but my question is: will I like her in the third movie?

I really never like Kim’s boyfriend, Jamie. Yes, Jamie was only included in three scenes but I would have thought he would have been in more. If I was the director, I would have had Jamie as being part of the people that want to take Bryan. Jamie does seem like a great boyfriend but I really don’t know that much about him yet. But, you missed my epic excitement when I saw Luke Grime’s name up on the screen during the opening credits because he is one of my favorite actors. Also because he is from True Blood, he played James in season 6 (Jessica’s love interest).

I think one of the reasons I finished the movie and I still have questions is the fact they switched directors and both of them had different ideas for the movie series. I didn’t like the opening credits because I felt like it was too weird and long. The movie was just predictable and a little boring.

I would have to give this movie a 2.8 out of 5. Like I have said so many times in this post that the movie was boring, rushed, and stretched out. The cast was great and they did have a better connection in this movie. The movie had a little better flow than the first one but the purpose wasn’t there. The purpose was to kill Bryan for what he did but the movie didn’t showcase it as much as I thought. The one thing I did like better in this movie was the fact that Lennie and Bryan were together. The two of them sort of got back together but never officially. The editing and the camera work wasn’t as great as the first. Overall, the second movie didn’t meet up to the standard I thought it would. 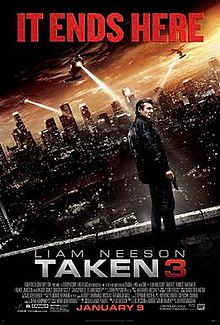 Ex-covert operative Bryan Mills and his ex-wife, Lenore, are enjoying a reconciliation when Lenore is brutally murdered. Bryan is framed for the crime and flees, with the CIA, FBI and police all in hot pursuit. For the last time, he channels his rage and particular set of skills into hunting down Lenore’s real killers, taking his revenge and protecting the one important thing left in his life: his daughter, Kim.

What is your current favorite movie? Do you like adventure movies or romantic movies? Have you seen this movie yet or do you want now? Let me know your thoughts in the comments!