I was on Twitter recently, shocker, and it was about the time that Sabaa Tahir released the cover change for An Ember In The Ashes. There were so many things that were tweeted after that and it really made me think about this. Either two things happen when a book gets a new cover. 1 – more people go out and want to read the book. 2 – people just stop reading the series because the covers aren’t the same. This is almost like part 3 to this long series I’m doing about covers. Make sure you check out my other two posts as well to read more of my thoughts about cover changes and all.

Movie/TV Show Covers vs. Original Covers | Should There Be More Than One Cover For A Book?

Yes, I am not a big supporter of cover changes. I just really don’t enjoy them. I like all my books to be alike and symmetrical on my shelf. But that doesn’t always happen. Does these cover changes stop me from reading a book? Nope. If I love a book series or an author enough, I will love the cover for all its glory. 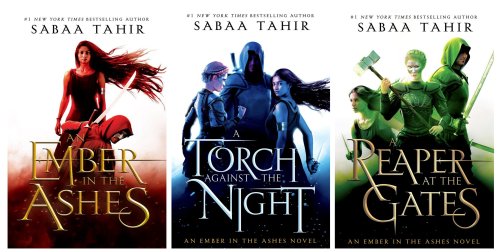 So many books go through a cover change from the first book to the second book. I just don’t like these cover changes. Wait for a special occasion or something to change the covers. Even though I don’t support these cover changes, I don’t always disagree with them. Sometimes a book series does need a cover change. In my opinion, Sabaa Tahir’s covers did need a little updating. I just feel like these covers fit the book better. Well, I have only read one book in the series and I will not be continuing on with it, but these covers are so much better than the other covers.

The thing that inspired the post was when I saw many people going on and say that they weren’t going to read the last book because of the cover change and because it didn’t match the other books in the series. Like seriously? Why would you stop buying the books because of a cover??? If you are anything like me, that is only more persuasion to be more books. Even if you have the book already.

Like I said earlier in the post: two things can happen when a book changes covers. One good and one bad. One of the plus sides of a cover change for a series is having new readers drawn in. Think about this. When Cassandra Clare changed the covers of The Mortal Instruments, how many more people did you see reading this book series? A lot more people. These covers changes can bring in so many people and make the author so much more money.

I am like most people out there. No matter how much you try and deny it, you have judged a book by its cover. Admit it. And I feel like whenever a cover change comes around, people either want to read it or not read it. If the cover isn’t the colors or has something on it that a reader doesn’t enjoy, they won’t buy it. And I think that is where some people have problems when a book changes cover. They find something wrong with the cover and somehow make an excuse with it. COVERS SHOULDN’T DEPICK IF YOU READ A BOOK OR NOT. I love nice covers but if a book sounds good, I will overlook this cover.

Another big problem which I have touched lightly on so far was the fact that the covers won’t match so the reader has an internal battle about the whole covers. They are stuck here, trying to figure out if they want to go and buy the other covers of just have a mismatched book series. I like to have everything to be the same and look the same. But if a cover change occurred, I wouldn’t stop for a minute to think about this buy. If you love a book so much, you shouldn’t let anything stop you from buying a book.

I know that this isn’t really a really developed rant and all but I really wanted to write this post. I felt like it was just way too important not to write a post for this. People need to hear this because it is way too important. If you didn’t like the book, that is the only time that you should not think about the next book in the series. If you loved the book and you see a cover change, you should still automatically buy the next book.

4 thoughts on “Just Becuase A Series Changes Covers, It Doesn’t Mean You Stop Supporting the Author”