Well, well, well. Here we are. I’m back with another show review. It has taken me so long to even finish this season and I know why. Bates Motel. But I have finally finished season 2 and I really don’t know about continuing this show. I’ll probably watch it but after this season, I am really wondering. Maybe I will save you the time and sort of talk you out of this season with this spoiler filled review of season 2. Make sure you catch yourself with season 1 before you continue just in case you forgot about some of the stuff that happened! 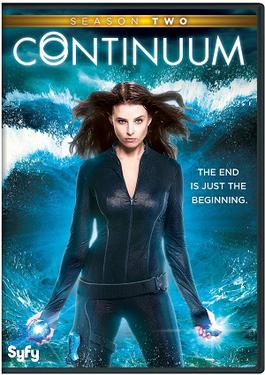 Detective Kiera Cameron is a cop from the year 2077 who was raised to rely on technology more than anything else, even herself. Now she and a group of deadly criminals called Liber8 are trapped in present-day Vancouver. Cameron needs to stop Liber8 before it can take down the corporations which will one day rule the world — thus altering the course of the future and changing the 2077 that Cameron calls home. She enlists the help of a teenage tech genius named Alec Sadler to help figure out a way to get her back to her own time, and she manages to work with the Vancouver Police Department with Detective Carlos Fonnegra to keep an eye on Liber8. With different ideals and backgrounds, Cameron and Fonnegra clash, but they trust each other, and Cameron is slowly learning to trust herself as well.

Kiera Cameron is a cop from 2077 who is currently stuck in 2012. With the help of her friend Alec Sadler, she has been able to make it so far. But currently, Alec is in some mud with his stepfather being killed and his stepbrother being part of Liber8 and getting arrested. Kiera has to enlist some help, even if they need to know the truth about her past. And when people begin to wonder about Kiera’s past, she has to have some sort of plan.

I loved the first season. I was so invested in it and I wanted to watch it forever and ever. But something in this season was different. I wasn’t excited to watch it. I felt like I was watching the same thing over and over again and I didn’t like that. It was almost like I was watching an episode of NCIS or something. I just didn’t think the cast and crew were into this season as much. It really makes me wonder if I want to watch the next season or not.

THERE WAS NOTHING EXCITING THAT HAPPENED THIS SEASON! The characters just seemed way too boring and there was nothing fun that happened to them. The only thing that happened that was interesting was Alec almost died because what’s her face was holding him to his death. Like he didn’t change at all. Alec kept talking about how a person could change but I really never saw that happening. Kiera just grew even more annoying and she just had to somehow make everything about her. Somehow she had to make the conversation about her and she had to make herself somehow her old self. Yes, she get’s to go ‘back to her time’ but she was just so caught up in her past life that she left them to get in the way. And that leads to an epic freak out because Mr. Weather or whatever his name was had the actor from The 100 who played Sin Clare. I liked his character though. And Julian. Some connection there…

The writing was just whatever. It was written well. I just don’t think there was any plot line or development in this season. I think that was part of the reason that I did continue on with this show. I love the direction of this show. I liked the idea behind it. I just don’t think it was going anywhere. Quite honestly, I could have lived without this season. It was useless. we do find out the little details about who Alec’s daddy is and his relationship with Emily and how she fits into this madness. I just didn’t enjoy watching it like I did. Yes, I did watch Bates Motel between episodes but it was just this show was so boring. I wanted to find another show to watch before I found Bates Motel.

The cast and crew just seemed out of it. No emotion was showed through it. It was like they didn’t want this season to do anything. The crew just was a let down this season. The directing was not there. The lighting was just terrible and the people who did these outfits, God. There were characters that were an important role in one episode and you would want to see more of them but you never saw them again. It was like they magically disappeared into Kiera’s world. Like the one episode with the whole wedding and the guy goes and gets the one other suit from the future. I loved that guy but he never showed up, again! They just seemed really lazy for some reason and I really didn’t care for that.

Overall, I would have to give this season of Continuum a 3 out of 5. I just didn’t think this season was so interesting and I didn’t like the writing at all. There really wasn’t special with the characters or just the whole season in general. If you watched the first season and are expecting season 2 to be as great as the first, be ready to be disappointed.

Have you watched Continuum? What did you think about season 2? What was your favorite season and why? If you were able to time travel, would you take the chance and do it? Let me know your thoughts in the comments!