Recently I have watched a lot of Zac Efron movies this month and I just now realized it. Whoops. I think I am going to blame that on my sister because she loves him and she has bought most of his movies this month. Oh well, and I also just realized that I reviewed two movies this week. Sorry! But anyway, welcome to my spoiler free movie review of Mike and Dave Need Wedding Dates. 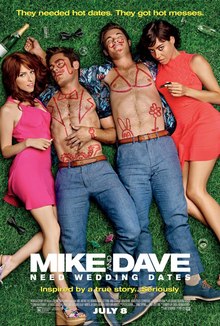 Two hard-partying brothers place an online ad to find the perfect dates for their sister’s Hawaiian wedding. Hoping for a wild getaway, the boys instead find themselves out-hustled by an uncontrollable duo. 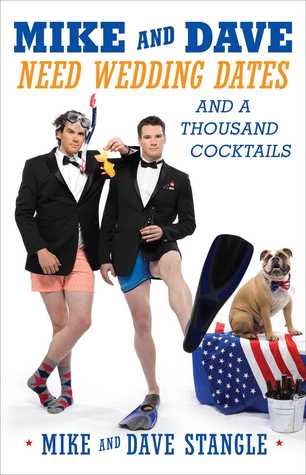 Two reckless but lovable all-American bros make a strong case for maturing slowly through their outrageous yet enlightening misadventures across this great country of ours.
My brother and I are looking for wedding dates for our cousin’s wedding.
We’ve been told by the bride that bringing dates is “mandatory” so we “won’t harass all of my friends all night” and “stay under control.” Rather than ask some fringe women in our lives to go and face the inevitable ‘does this mean he wants to take it to the next level?!’ questions, we’d rather bring complete strangers and just figure it out…
We’re both in our 20s, single, dashingly tall, Anglo-Saxon, respectfully athletic, love to party, completely house trained…love our mother, have seen Love Actually several times…raw, emotional, sensitive, but still bad boys.…You should be attractive or our aunts will judge you, but not TOO attractive or one of our uncles might grope you.
Dave and Mike Stangle thought nothing of it when they boozily decided to turn to the “activity partners” section of Craigslist to solicit dates to their cousin’s wedding. The hilarious, out-of-this-world ad that they came up with—featuring a picture of the two brothers as centaurs—immediately went viral, eventually landing these Wayfarers-wearing, moped-riding, completely reckless but ultimately loveable bros in the annals of the “Internet famous.”
In Mike and Dave Need Wedding Dates, the Stangle brothers bring their trademark, off-color humor to everything from their most embarrassing adolescent experiences (like getting beat up by a girl on their front lawn…in front of their dad), to the most outrageous predicaments (like tripping on mushrooms with their bulldog, Frank), to proper sexting etiquette, and finally to breaking up a midget bar fight (you have to shoo them away). With the incredible comedic chemistry of Vince Vaughn and Owen Wilson in Wedding Crashers and the uncensored honesty of Tucker Max, Mike and Dave insist there’s nothing wrong with just seeing where life takes you.

I had a hard time getting into this movie. I am up to watching any movie but this might be one of those rare movies that I can’t get into because they are too strange. To me, the idea behind it was there but the cast and the way that it was directed wasn’t up to the level. I didn’t really see what the idea behind the movie. When we finished the movie, I understood this movie a little better but I really didn’t like the movie.

This movie is definitely for mature adults only. There is a lot of fowl language spoken from the very beginning, talking about sex, drugs, drinking, and some nudity (at one point, you see a character full naked). Compared to the other Zac Efron movies I have watched this month, this one is a lot worst than the others. All of these movies have one thing in common: MATURE ADULTS ONLY.

For the most part, the movie really wasn’t funny. It was more stupid than anything. Of course, you can’t have a movie without a good laugh and there were some good laughs in the movie, but that might have been because of something stupid a character did. If you are looking for a movie with a good laugh, I would turn to another movie to watch.

The whole idea of this movie was for two brothers to bring a date to their sister’s wedding without messing up the whole thing. Obviously, you already know before you start the movie that the two brothers are going to mess it up somehow. The question is going to be: how are they going to mess it up? They have messed up so many different family events so you are trying to figure out what is more extreme than what they have done before. I think that because of me thinking this over and over took away some of the extremeness of this movie plot.

I personally didn’t love the cast but I didn’t hate the cast. Certain people fit into the plot perfectly – Adam DeVine and Aubrey Plaza – but most of the cast I could see someone else playing their role. Adam Devine’s acting for the character Dave had to win the top character for the whole movie. Adam had to do some many interesting things in the whole entire movie and he kind of made the movie. I have been a fan of Adam’s since seeing him in Modern Family and this was a must see for him. Dave was the outgoing brother and he almost seemed to get himself into awkward situations, like a very disgusting on including his sister, cousin and his wedding date.

Overall, if you are looking for a interesting, cheap, romantic movie, here you go. The movie keeps you wondering and makes you think about some of the stupid things you have done in life. I might have enjoyed the movie a little more if I understood what was happening in the movie and if I read the book. Zac Efron fans, beware. This is not one of his best movies.

Have you seen this movie? Do you like Zac Efron, Adam DeVine, or any of the other actors in the movie? What was the last movie you saw? Let me know your thoughts in the comments!