Recently I have been in love with Sarah J. Maas. All I have been reading for the past few weeks has been Sarah J. Maas and it has been amazing. As soon as I finished reviewing her book A Court of Thorns and Roses, I had to start the second one. Beware – This will contain spoilers unlike the first book because this book had all the feels and is one of my favorite books ever.

Title: A Court of Mist and Fury

Feyre survived Amarantha’s clutches to return to the Spring Court—but at a steep cost. Though she now has the powers of the High Fae, her heart remains human, and it can’t forget the terrible deeds she performed to save Tamlin’s people.
Nor has Feyre forgotten her bargain with Rhysand, High Lord of the feared Night Court. As Feyre navigates its dark web of politics, passion, and dazzling power, a greater evil looms—and she might be key to stopping it. But only if she can harness her harrowing gifts, heal her fractured soul, and decide how she wishes to shape her future—and the future of a world torn apart.

About the Author: Sarah J. Maas is the #1 New York Times bestselling author of the Throne of Glass series and A Court of Thorns and Roses series, as well as a USA Today and international bestselling author. Sarah wrote the first incarnation of the Throne of Glass series when she was just sixteen, and it has now sold in thirty-five languages. A New York native, Sarah currently lives in Pennsylvania with her husband and dog. Empire of Storms, the fifth Throne of Glass novel, is available now. She graduated Magna Cum Laude from Hamilton College in 2008 with a degree in Creative Writing and a minor in Religious Studies. Sarah lives in Bucks County, PA, and over the years, she has developed an unhealthy appreciation for Disney movies and bad pop music. She adores fairy tales and ballet, drinks too much tea, and watches an ungodly amount of TV. When she’s not busy writing, she can be found exploring the historic and beautiful Pennsylvania countryside with her husband and canine companion.

This book is the second book in Sarah J. Maas’ second series and I seriously love this series. I just finished the book the other night and I went to bed that night in tears, yelling at the book and wanting the third book in my hands. The book has all the emotions that a book needs and Sarah J. Maas brought something out of me that I didn’t even knew it was in me.

Firstly, in ACOTAR I was all for Team Tamilin. I loved Tamilin, wanted to get a person like Tamilin for myself and just wanted to give him a hug. I also didn’t like Rhysand. I didn’t like what he was doing to Feyre – since he purchased her for one week every month. I was all for wedding between Tamilin and Feyre. All of that changed in this book, really fast. In ACOMAF, I was totally opposite. I hated Tamilin once I found out the truth. I loved Rhysand and I loved him and Feyre together. Tamilin changed from the first book to the second book and he became obsessive. I understand the fact that she is your fiance and everything but you can not leave her in the court, locked up, to die. That is not love! Rhysand showed Feyre what love was. He taught her how to read, cared for her, and allowed her to be herself. He never forced her to do anything that she didn’t want. Rhysand wanted Feyre to find her true self while Tamilin wanted her to claim as his. Tamilin really didn’t love her. He wanted to get to say that he had Feyre.

Little did we know that when Feyre was made again into Fae that she was mated with Rhysand. While trying to protect Feyre from being shot by poisonous arrows, Rhysand takes them. Feyre goes to find out how to save him. When she went to find that out, she was told that the only way to save her ‘mate’, and she completely lost it. Once Rhysand was well enough to go back to the Night Court, Feyre asked Mor to take her to a special location. Rhysand tells her that he had dreams about her even before he knew she was real. Amarantha had him wrapped around her finger and when he killed Clare, he knew that it wasn’t Feyre. He wanted to get to know her once she got to Amarantha’s palace. He tried to stay away but Rhysand couldn’t. When Feyre was dying after ‘killing’ Tamilin in the third trial, Rhysand held on to her. He already lost his family to Tamilin’s and he wanted a little revenge on Tamilin. Rhysand knew he could mate with Feyre and she will stay alive. He gave her the space she needed. When Feyre wanted to escape her wedding, he jumped on the option to go and get her. He wanted to make her save and she wasn’t stuck in alone.

While on the topic of mating, Lucien happened to get mated with Feyre’s sister, Elain. During the final pages of the book, Feyre was putting the book back when Jurian came in front of her. Rhysand tried not to let the smell of the mating bond exposed to Jurian because he knows what will happen. The King of Hybren come forward with two other people – Lucien and Tamilin. Tamilin wanted to get Feyre back but Rhysand was not going to let him The King brought out both of Feyre’s sisters and he demanded questions. He tourtured her sisters and changed them. Nesta gained features of the Fae while Elain was different. While her fight with the guards didn’t help, she made it through the Cauldron. Lucien feels something and he helps her stay alive, with the mating bond. Feyre forces Rhysand to take her sisters somewhere and she went along with Tamilin. Out loud to the public she was in trouble and hated Rhysand. Inside of her head, she was telling Rhysand with their special talking in head ability to play along. No one but Rhysand and Feyre knew that she was the High Lady of the Night Court and even though the King of Hybren claims he unmated him.

There were so many more sexy scenes in this book. In the first book, it was pretty light. It really never went into detail but in ACOMAF, it was different. Starting on page 20 and continuing through about 26, you read about Tamilin and Feyre’s sex scene. During one of the stay at a ‘hotel,’ Rhysand and Feyre decided to do it. The funny thing is, one of my favorite lines comes out of the whole situation:

“Skin to skin, the calluses of his hands made me groan as they scraped the tip of my breast and circled around my peaked nipple. ‘I love these,’ he breathes onto my neck, his hand sliding to my other breast. ‘You have no idea how much I love these.'”

I have no clue why that is my favorite line in the whole entire book. I know, I am weird. I found that hilarious because I never expected for Rhysand to say what he did. Also, I read this during the middle of my Adobe class and it was impossible to keep a straight face.

Emotion was high for this book. Not once did I get tired of reading this book. Of course there were times I wanted to throw it against the wall because I didn’t like what was going on in the book. You can feel the emotion flowing through you when you read about the couples, the fights, the protection, and everything else.

Sarah J. Maas has a power to make you want to do nothing for the rest of your life. Once you pick up the book, all you want to do is read the book. Action packed, full of emotion, and everything you need to love, this book is for you. ACOTAR is a retelling of Beauty and the Beast but this one happens to be more like the story of Hades and Persephone. Either way, I love this book. This happens to be my current favorite Sarah J. Maas book – but I still haven’t read Empire of Storms and I am so excited for this book. 5 out of 5 Stars. 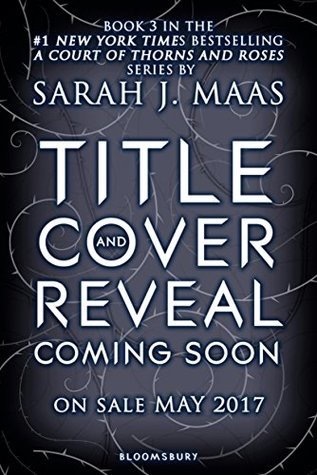 Looming war threatens all Feyre holds dear in the third volume of the #1 New York Times bestselling A Court of Thorns and Roses series.

Feyre has returned to the Spring Court, determined to gather information on Tamlin’s maneuverings and the invading king threatening to bring Prythian to its knees. But to do so she must play a deadly game of deceit-and one slip may spell doom not only for Feyre, but for her world as well.

As war bears down upon them all, Feyre must decide who to trust amongst the dazzling and lethal High Lords-and hunt for allies in unexpected places.

In this thrilling third book in the #1 New York Times bestselling series from Sarah J. Maas, the earth will be painted red as mighty armies grapple for power over the one thing that could destroy them all.

May I just say that this information is coming from Goodreads. The publication date and all other information may be changed at a later date.

Have you read this book? Do you like Sarah J. Maas? What is your favorite book? What are you currently reading? Let me know your thoughts in the comments!