So… I have said this before in my review for season 2 of this show that I really don’t know why I am continuing this show. I don’t know why but it is taking me forever to get through it. But for some reason, I keep doing so. Now, with that said, I am back here again with another review for season 3 of this show. I just have to say, I’m sparing you the spoilers because I think you all should go and give the show your own chance. 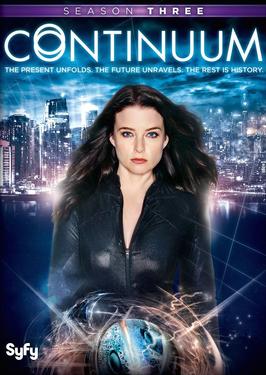 Detective Kiera Cameron is a cop from the year 2077 who was raised to rely on technology more than anything else, even herself. Now she and a group of deadly criminals called Liber8 are trapped in present-day Vancouver. Cameron needs to stop Liber8 before it can take down the corporations which will one day rule the world — thus altering the course of the future and changing the 2077 that Cameron calls home. She enlists the help of a teenage tech genius named Alec Sadler to help figure out a way to get her back to her own time, and she manages to work with the Vancouver Police Department with Detective Carlos Fonnegra to keep an eye on Liber8. With different ideals and backgrounds, Cameron and Fonnegra clash, but they trust each other, and Cameron is slowly learning to trust herself as well.

Alec has just gone back in time to save the love of his life, Emily. When he decided to go back in time, he ruined the chance for Kiera Cameron to go back to 2077, to her life and family. Now Kiera is stuck in some other timeline where she is beginning to see dead people. And now she is beginning to learn new information about time travel, things scientist don’t exactly understand. Kiera being Kiera, it is her job to try and stop Alec from stopping her chance from seeing her family again.

I will have to say, this has to be the most scientific season so far but it was just so far off from what has been occurring. It was like the writers of the show didn’t think this show would make it to its third season. It was just so different from the other seasons that I really don’t know what to think about it. I liked it, but at the same time, I didn’t because it wasn’t like the other seasons. I will say, it was exciting to watch.

I hate to say it but I am going to but I think one of the reasons that I continue to watch this show is because the writing of it is so well. Yes, the show is very different and sort of likes to repeat itself with events but it is written really well. They know what they are doing and the direction they are going. If you didn’t pay attention to one episode or earlier in the episode, you might be a little confused on what was going on.

Even though this really doesn’t matter but thank god they decided to change that theme song/intro. The one they had before was just so annoying. I hated it. With this season, they changed it and I am so happy about that. This theme song/intro makes more sense than the other one. And I love the fact that this one seems to adapt with this season with the more scientific aspect of the show. It really sort of shows which direction this show is heading in. But I just don’t like the fact that they changed the font style of the show. I really did enjoy that part of the show. I loved the way it looked on the screen and now they decided to change it? I can’t handle that change though.

The cast seemed to get along a lot better and really enjoyed shooting this season rather than season 2. I still personally think that they did their best in season 1, but they seemed to be a lot happier. Maybe season 2 was just a fluke and they all were sick or something. I don’t know. That might be why they changed the direction of season 3. They really seemed to dig deep into their characters and really hit a good emotion level.

Something I did have an issue with it the fact that the sequence of events didn’t always flow like they used to and the directing seemed sort of slack. The lighting also sort of annoyed me because it could be very terrible at one moment and be amazing at the next. It used to be that we saw a part of Kiera’s past at the start of the episode that sort of played into the episode. Yes, they did that but it really didn’t feel the same as it did before. It almost seemed like they were trying to waste more time on that than the actual episode. There were times that the camera was not steady and it really wasn’t placed in the ideal place. I also sort of feel like it was moved around a lot more than what it needed to. It could have been a lot better than what it was.

I think I am going to finally start to wrap this up but I can’t leave without talking about the effects that happen through the show. So many reviews talk about how amazing they are and how they are eye-opening. I really didn’t see them. It might have been me and all but I just could see past them. I could tell when something was edited. It was good and done correctly but I just really didn’t buy it like others. I feel like it has started a movement on improving effects like this but that might just be a personal opinion as well. That’s why I am a reviewer.

Overall, I would have to give this season of Continuum a 3 out of 5. I feel like it was a step up from season 2 but it just sort of fell flat. I used to be so intrigued with this show and now I really don’t want to have anything to do with it. I’m not sure if I want to go and give season 4 a try yet but seeing it is only 6 episodes long or something, I might go and watch it.

Have you watched Continuum? What did you think about season 3? What was your favorite season and why? If you were able to time travel, would you take the chance and do it? Let me know your thoughts in the comments!