For my mom’s birthday, we decided that we would go and get her Nicholas Spark’s new book. She loved his work and she would never go and spend money on his book. So when she received it, she looked at me and asked me if I only got it so I could read it right after her. The truth was sort of yes. That was in February. It is now September and I finally gave the book a try. Welcome to a spoiler-free review of Nicholas Sparks’ Two by Two. 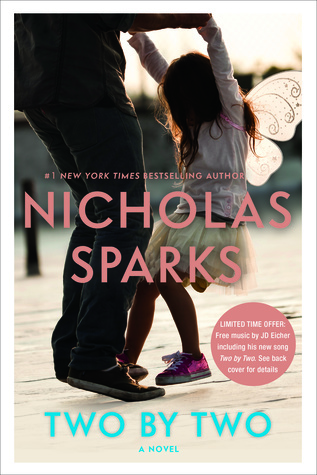 At 32, Russell Green has it all: a stunning wife, a lovable six year-old daughter, a successful career as an advertising executive and an expansive home in Raleigh. He is living the dream, and his marriage to the bewitching Vivian is the center of that. But underneath the shiny surface of this perfect existence, fault lines are beginning to appear…and no one is more surprised than Russ when he finds every aspect of the life he took for granted turned upside down. In a matter of months, Russ finds himself without a job or wife, caring for his young daughter while struggling to adapt to a new and baffling reality. Throwing himself into the wilderness of single parenting, Russ embarks on a journey at once terrifying and rewarding-one that will test his abilities and his emotional resources beyond anything he ever imagined.

About the Author: Nicholas Sparks is one of the world’s most beloved storytellers. All of his books have been New York Times bestsellers, with over 105 million copies sold worldwide, in more than 50 languages, including over 75 million copies in the United States alone.
Sparks wrote one of his best-known stories, The Notebook, over a period of six months at age 28. It was published in 1996 and he followed with the novels Message in a Bottle (1998), A Walk to Remember (1999), The Rescue (2000), A Bend in the Road (2001), Nights in Rodanthe (2002), The Guardian (2003), The Wedding (2003), True Believer (2005) and its sequel, At First Sight (2005), Dear John (2006), The Choice (2007), The Lucky One (2008), The Last Song (2009), Safe Haven (2010), The Best of Me (2011), and The Longest Ride (2013) as well as the 2004 non-fiction memoir Three Weeks With My Brother, co-written with his brother Micah. His eighteenth novel, See Me, published on October 12, 2015. His newest book, Two by Two, will be published on October 4, 2016.
Film adaptations of Nicholas Sparks novels, including The Choice, The Longest Ride, The Best of Me, Safe Haven (on all of which he served as a producer), The Lucky One, Message in a Bottle, A Walk to Remember, The Notebook, Nights in Rodanthe, Dear John and The Last Song, have had a cumulative worldwide gross of over three-quarters of a billion dollars.
In 2012, Sparks and his publishing agent and creative partner Theresa Park, launched Nicholas Sparks Productions, with Park as President of Production.  A film version of The Guardian is currently in development, as is a film based on Football Hall of Famer Gale Sayers’s friendship with Chicago Bears teammate Brian Piccolo.
Sparks lives in North Carolina. He contributes to a variety of local and national charities and is a major contributor to the Creative Writing Program (MFA) at the University of Notre Dame, where he provides scholarships, internships, and a fellowship annually. He co-founded The Epiphany School in New Bern, North Carolina in 2006. As a former full scholarship athlete (he still holds a track and field record at the University of Notre Dame) he also spent four years coaching track and field athletes at the local public high school. In 2009, the team he coached at New Bern High School set a World Junior Indoor Record in the 4 x400 meter, in New York. The record still stands. Click to watch the Runner’s World video with Nicholas.
The Nicholas Sparks Foundation, a 501(c)(3) nonprofit committed to improving cultural and international understanding through global education experiences for students of all ages was launched in 2011. Between the foundation, and the personal gifts of the Sparks family, more than $15 million dollars have been distributed to deserving charities, scholarship programs, and projects. Because the Sparks family covers all operational expenses of the foundation, 100% of donations are devoted to programs.

Russel Green had his life all planned out. He had a wife who he loved and he has his perfect daughter named London. Now, his life isn’t what he wanted it. His wife is becoming more and more different. He isn’t in love with what he is doing for a living. And now he is worried about his father. When Russ didn’t think life could get any worse, his wife leaves him alone and helpless right when he doesn’t have a job. Now, Russ is all alone, jobless, and taking care of his daughter. He has no idea what else he has to do.

So this book and I. We might have some beef. My mom talked about how good it was and I had really never been disappointed in one of Nicholas Spark’s books, other than The Notebook. But something about this book and I just didn’t click. You know? I just felt like this book was long and boring. Basically nothing. There was so much potential in the book but it never happened.

I felt like I was reading the same thing over and over again. Nothing really exciting happened in the book. And the book went very slow in pace. Nicholas Sparks’ almost seemed like he let one of his kids write this book. It was different from his other books, I will say that but the elements that made me fall in love with his other books just wasn’t there. There were so many things that I just was not there that were somehow allowed to go past the editing stage of the book.

The characters probably had to be one of my biggest problems with the book because there were no layers or even a background story to them. It was like they were being created as the story went on. And I have never had this issue before with one of his books – I couldn’t relate to anything that was going on with the characters. That might have been one of the big reasons I didn’t enjoy it as much. I thought I would like a character at first but by the end of the page or paragraph, I wouldn’t. It was like they all were playing the big blame game and everyone thought they were right and perfect. None of them wanted to admit they were wrong. And it got so annoying because it was in all of the character, even London. And you always have to have one nice, amazing character but there never was one of them in the book. How do you forget one of my favorite characters?

Let’s be real here for a second. This 3 out of 5 I am giving this book is pretty nice because I had so many problems with it. There were a million times that I questioned myself about reading the next page. But like every single Nicholas Sparks’ book, I was drawn in and needed to know how the book ended. I needed to know if it ended up like I thought it would. There were moments that I really liked a character and I would really want to know if I see more of this. There were also certain events that I wanted to know how they all fit together. I guess I could have just googled it and saved me the time of reading the book, I can still say I read the whole book.

Part of me is thinking that Nicholas Sparks is getting tired of writing. And I also feel like a lot of this book is inspired off of his own life. If you didn’t know, Nicholas Sparks is divorced so I feel like he wrote this book from what he was feeling. It was pretty obvious while reading it to me. There was like no emotion, no climax, no nothing. It was pretty much, “I have to write a book. Let’s put words onto a page that makes sense and sells it. I need some more money.” The depth that was typically found in his novels weren’t there. The love was missing. The mystery was basically laughed off. After reading this one novel of his is making me second guess reading some more of his recent work because it might turn out like this one.

One thing most people think of when you say Nicholas Sparks is emotion. You always end up crying or laughing in his books or movies. HAHAHAHA! You think you are getting some in this book. Yah right. You aren’t. Well, I guess I am sort of lying when I say you won’t have any emotions with this book. You are going to get some, just of annoyance and hate. You are going to be sick of the characters and just sort of want them to have an ending like The Titanic. There wasn’t really one time that I thought about crying or laughing in this book. And if I did laugh, it is because the writing was just so annoying that it was stupid! Like when a character does something so stupid that you can’t help but laugh? Yah, stuff like that will happen but you won’t laugh because something is generally funny. Makes sense? I hope so.

Overall, I would have to give this book a 3 out of 5. This has to be my least favorite Nicholas Sparks’ book, which was held by The Notebook. Though the idea behind the novel was great and it could have made a great novel, Nicholas Sparks’ really didn’t seem to put his heart and soul into this one as much. It was dry and just wasn’t at the top of his game. Who knows when I’ll read one of his other works after this one. If you are a Nicholas Sparks’ fan, just be ready to get a surprise of a lifetime with this book.