With school, I am getting less time to watch TV and read. Only one of those things is a good thing but at the same time bad. Even with my busy schedule, I fit it in somehow. But I finally finished Season 3 of one of my new favorite shows, Bates Motel. And to think I only have two more seasons of this show. I’m still leaving out the spoilers because I still think you all should go and watch this show. Just beware of spoilers from the previous two seasons that might come up in the review. 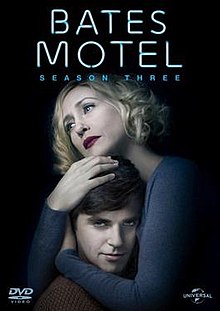 After the death of her husband, Norma Bates buys a motel in the picturesque coastal town of White Pine Bay, giving herself and teenage son Norman a chance to begin anew. Shy Norman is reluctant at first, but with the help of his mother — with whom he shares an intensely close relationship — the boy begins to open up to others and make new friends. Some locals, however, aren’t as friendly and welcoming to the Bates, who discover that because White Pine Bay isn’t as peaceful as it appears, they are forced to do whatever it takes to survive. The drama series, from executive producers Carlton Cuse and Kerry Ehrin and inspired by the seminal 1960 horror film “Psycho,” explores the formative years of Norman Bates and how his complicated bond with his mother forged a serial killer.

Norman Bates was just left off the hook for the murder of Blair Watson. Norma was planning on life getting back to normal but we all know that when you have a son like Norman, that never happens. So when Annika Johnson, one of the motel’s guest, goes missing and Norman was the last one to see her, Norma gets a little worried. Norma doesn’t just have to worry about Norman in this case. Norma begins to go a little mental in the head and she begins to wonder if she has too much on her hands since Dylan is back at home. Was Norman the one responsible for Annika’s death or was that just a coincidence?

Oh my god. That is all I have to say for this season. So much happened this season and I was sucked in. I didn’t want to stop watching this show, even though I had to at times. This has to be, hands down, the best season there was. The acting was amazing. The cast was amazing. The whole plotline was spectacular. I just seriously enjoyed this season.

We find out so many amazing things about these characters through the season and at times, it made my heart rip out of my chest. The relationships that occurred through the season were outstanding, no matter how strange the two might look. If you were ever wondering anything from season 1, more than likely, you are getting this answer. If you ever wanted to know something, you might get an answer. You know how there is always one season of answers? This seemed to be that season so far. I swear this show gets better and better through the series.

Basically, these are some of the best characters that I have seen. Even though they have been on this show for 3 seasons, they still continue to grow through everything. We still have the relationship issues between Norma and Caleb. Whatever that’s going on between Romero and Alex. Dylan and Caleb. Emma’s new problem with her lungs. It all is making these characters grow and it is beautiful to watch. And whatever is mentally wrong with Norman is being done amazingly. There are so many layers that are written between all these characters and it was written beautifully.

As I talked about in my last review, I was able to figure a lot of stuff out in season 2. For some reason, I didn’t see anything coming (minus the spoiler I knew and loved through the season). I was waiting for certain things to happen but I never saw anything coming up. I honestly really enjoyed the writing of this season. I found it so enjoyable and it had so much thrill in it that I was so excited to watch another episode. There were a few times that I really didn’t enjoy what was going on or in one case, who was in an episode. I’m really wondering a few things now after I watched the last few episodes this season and there are so many things that I can’t wait to watch. I loved Norma going crazy. I loved Norman being Norman. I loved all these characters and what they were up to.

I loved the directing and the whole backdrop of this show still. I love how they show how Norman’s blackouts and I love how they keep getting worse and worse. And I was really questioning about why Norman was able to basically impersonate Norma when he went to talk to Caleb in the previous question. At least I know that the show didn’t just plan that and not answer my questions. I might be getting answers in the next season and I really hope I do. I just really love how they basically bring us inside of Norman’s mind during it. I just really love how the direction of the show is heading and I can’t wait to see where this show takes me in the long run.

Overall, I would have to give season 3 a good 5 out of 5. There were so many amazing things that happened that I can’t help but love. I need to dive into this show again. AND I’M NO LONGER IN THIS GUILT OF THIS SPOILER! But I am always going to go and say this yet again if you haven’t watched this show, you need to go and give it a try.

Have you seen this show? Have you seen all the seasons? What was your favorite season? Who is your favorite character from the show? Should I still go and give Psyhco a try? What other shows have you watched that are good? Let me know your thoughts in the comments!