I might have mentioned it before but I seriously love Bates Motel. It is amazing and it is one of my new favorite shows in the world. Like I literally just finished season 2 and I really want to watch season 3. But guess what. I have to bring you all another review. And that is what we are doing here today. Strap on in and read this spoiler free review of Season 2. Just be aware that if you have not seen season 1 of this show, you are at risk of being spoiled. 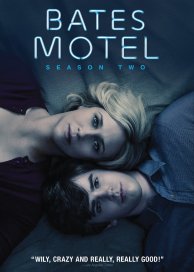 After the death of her husband, Norma Bates buys a motel in the picturesque coastal town of White Pine Bay, giving herself and teenage son Norman a chance to begin anew. Shy Norman is reluctant at first, but with the help of his mother — with whom he shares an intensely close relationship — the boy begins to open up to others and make new friends. Some locals, however, aren’t as friendly and welcoming to the Bates, who discover that because White Pine Bay isn’t as peaceful as it appears, they are forced to do whatever it takes to survive. The drama series, from executive producers Carlton Cuse (“Lost”) and Kerry Ehrin (“Friday Night Lights”) and inspired by the seminal 1960 horror film “Psycho,” explores the formative years of Norman Bates and how his complicated bond with his mother forged a serial killer.

With all that has happened to Norma Bates and her son Norman, she thought that life could throw her any curve ball and she could handle it. There are now reports of the death of Norman’s teacher, Miss Blair Watson. And Norma can’t help but think that Norman did it, no matter how many times Norman convinces her he didn’t do it. Norman begins to worry Norma with his obsession with Miss Watson and taxidermy. Emma starts thinking about some new guy who might just be the opposite of what she wants. Dylan wants nothing to do with Norma but still somehow has something pulling him back to her.

Norman Bates. Oh, Norman Bates. What to say about you. You are the thing that makes me want to watch Pyscho. And one of these days I am going to watch it. Norman Bates experiences these blackouts that cause him to basically change his whole demeanor changes. Like, he blacks out and he basically kills people without remembering things. Through this season, there are some things that also take place with his blackouts that really make you change your mind about Norman. But with Norman’s crazy self, him in the flesh makes the show amazing.

I found the flow of this season a lot more flowing and a lot more exciting. With everything that happened with Bradley and Norman, I couldn’t help but want to know more. On top of that, Emma was with Gunner (where the heck did he go in the first place) and Norma was just being Norma. I liked how the whole plot centered around Norman’s blackouts in a sense. He was the one who was there when Miss Watson died so the whole first part of the season, well the whole season dealt with her death. There was not a single episode that Blair Watson’s name was not in the episode.

I don’t know if this was the point or if I just over thought a bunch of stuff, but I was able to figure out a lot of the stuff that was going on in the show. Normally, I am able to find out stuff really easily before everyone else is but something was different. Norma’s brother came into the plot in the beginning of the season and really changed a lot. We already previously knew that Norma’s brother forced her to have sex with him and did it until the time she moved out. There really wasn’t much said about it last season but this season came to the truth. And it was hard to even watch because of Norma’s story.

Which that leads us the writing of the season. Which is a little hard for me to judge because I feel like I might be biased because I really liked this season. Like I previously said, I was able to figure out a few things but I still really loved how it happened. I felt like there were a few things that were written in that we could have lived without. Vera Farmiga does have an amazing voice but I just thought the theater parts were unnecessary. Yes, we meet Christine there but couldn’t they meet at a store or something?

I just love every single one of these characters, no matter how evil and dangerous they might be. My love for Dylan and Emma and Alex Romero continues to grow so much. Even though I have spoiled myself for thing through the series that broke my heart and I can’t wait to watch, I am still way too excited to see if Alex and Norma end up getting together. I mean they hated each other at the beginning of the show and now they are friends. Alex mentions the fact that when Norma changes that you could see it from the window. The way he does a few other things through the season points fingers to them getting together so I’m really hoping. And I seriously love Gunner. Gunner is a weed addicted person but he cared for Emma so much. I just love how this section of the review went from characters to relationships. Anyway, the characters are still amazing. They are growing through all the episodes and you see how much they change when something happens. And they really do tell the story. Certain things will change in an episode for a character and it really makes me want to watch a million more episodes.

Overall, I would have to give this show a 4 out of 5. I wouldn’t say that it was as good as the first season but it was pretty amazing. This show continues to baffle me and blow me away with everything that is happening. I can not wait to see this next season because of the way that this season ended, I need to know stuff. But as I have said and will continue to say, if you have yet to see this show, you are missing out.