I recently participated in the Make Me Read It read-a-thon and this was the book that came in second place. Though I was planning on finishing it during the event, that did not happen. I finally finished the book and I’m still trying to wrap my brain around everything that happened in the book. I will say, I have a lot to say about this book so I’m sorry. There are spoilers that are contained within this review. 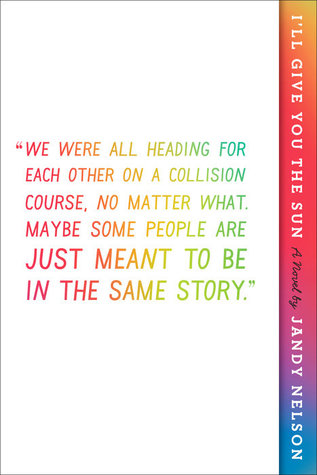 Title: I’ll Give You The Sun

“We were all heading for each other on a collision course, no matter what. Maybe some people are just meant to be in the same story.”
At first, Jude and her twin brother Noah, are inseparable. Noah draws constantly and is falling in love with the charismatic boy next door, while daredevil Jude wears red-red lipstick, cliff-dives, and does all the talking for both of them.
Years later, they are barely speaking. Something has happened to change the twins in different yet equally devastating ways . . . but then Jude meets an intriguing, irresistible boy and a mysterious new mentor.
The early years are Noah’s to tell; the later years are Jude’s. But they each have only half the story, and if they can only find their way back to one another, they’ll have a chance to remake their world.
This radiant, award-winning novel from the acclaimed author of The Sky Is Everywhere will leave you breathless and teary and laughing—often all at once.

About the Author: Jandy Nelson, like her characters in I’ll Give You the Sun and The Sky is Everywhere, comes from a superstitious lot. She was tutored from a young age in the art of the four-leaf clover hunt; she knocks wood, throws salt, and carries charms in her pockets. Her critically-acclaimed, New York Times bestselling second novel, I’ll Give You the Sun, received the prestigious Printz Award, Bank Street’s Josette Frank Award, and is a Stonewall Book Award honor. Both Sun and her debut, The Sky Is Everywhere, have been YALSA Best Fiction for Young Adults picks (Sun, a Top Ten on Both YALSA and Rainbow Lists) and on multiple best of the year lists including the New York Times, Time Magazine, NPR, have earned many starred reviews, and continue to enjoy great international success, collectively published in over 47 countries. I’ll Give You the Sun has been sold to Warner Brothers and screenwriter Natalie Krinsky is currently writing the adaptation. Jandy, a literary agent for many years, received a BA from Cornell University and MFAs in Poetry and Children’s Writing from Brown University and Vermont College of Fine Arts. Currently a full-time writer, she lives and writes in San Francisco, California—not far from the settings of her novels. Visit Jandy at www.jandynelson.com. Follow her on twitter: @jandynelson or Facebook: facebook.com/jandy.nelson. Author photo credit: Sonya Sones.

Noah and Jude Sweetwine are twins. When they were young they couldn’t stand to be apart. But as they grew up, things changed. Where the twins were interested in art. Noah was scared for others to see his work while Jude was willing to share with anyone. Now, Noah and Jude don’t talk. They don’t even look at each other and their art has changed. With their mom dead, with their grandmother, Jude is able to find relaxation in talking to them. Told in both Noah and Jude’s perspectives, switching between the age of 13 and 16, take a toll and see how everything relates to one another somehow.

I’m just going to put this out there and say that I really don’t see what all the hype was about this book. I know, please don’t kill me. I just didn’t enjoy this book as much as I wanted to. With everyone talking about how amazing and sweet this book was, I just really honestly didn’t see it. It was a good read, I will admit it, but I just don’t see this 5 stars thing. Is any of this making sense to you? I hope so. My thoughts are sort of everywhere.

DOUGHNUTS! Who would have guessed that doughnuts were the one thing that kept me reading this book? In the novel, Jude was challenged to eat a doughnut without closing her eyes or making sexual sounds. Through the whole entire part, especially when Jude caves into the bet,  I really wanted a doughnut. As I continued on with the book, I was really hoping that doughnuts were going to have some play in the book again but they really didn’t. I did get my doughnut, just not the right kind. They just put a Dunkin’ Doughnuts in my town and when you have previously lived off of Krispy Kreme, they are the best doughnuts in the world. I wanted a smores but guess who didn’t have one. Anyway…

I will say that the writing of the book was amazing and I loved the whole entire thing. So many things were added to the writing that just stuck out to me. Jandy Nelson writes like poetry and I would love to read that poem. I could write a song out of it. I will say the ending did seem a little rushed and I would have wanted to see a few other things happening but it was still nice. The ending wasn’t the only time I felt like the book was being rushed. There were at least five times that I wished I would have been able to know more about a certain event. But if you turned to any page of this book, you are bound to find some sort of line that will speak to you and make you want to curl up in a ball and think about life.

Before I jump into the other thoughts of this book, I just thought I would give Jandy Nelson some more praise on writing the different perspectives. I did enjoy seeing how these two went from talking and being inseparable to not talking at all and hating each other. I thought Jandy Nelson did an amazing job on that. I thought she did a great job with giving each of the character’s their own minds and hearts that were just so different but the same at the same time. It was almost like Jude and Noah were the same person at times. I’m not a fan of different perspectives, which you would know if you read my other reviews, but this one was done correctly. And beautifully.

Even though it pains me to say this, I really found Noah to be quite annoying. And I really wish there was a little more drama and action that took place. I hated reading Noah’s character and it might just be because I am so much like him as a kid. If you have read the book, you would already know that Noah is, how do I say this? Noah is gay. Noah is in love, and almost obsessed with this guy named Brian. I’m not gay or anything but I still felt a connection. And that relationship was cute. That was the only cute relationship in the book. Anyway, I’m way too close to Noah. I’m not one who has many friends, but I have all the friends I need. I have enough friends to make me happy. I don’t need to worry about them doing certain things. There are also certain things that I don’t want my friends to know. I but reading Noah’s sections were a little hard for me. I just felt like Noah had a way more mature mind than what a 13-year-old guy should have had. There also was really no drama or action that really took place in the book. I was expecting there to be a lot more of it. I just found a bunch of romance and that was not what I wanted for this book.

But I sort of disliked Jude a little more. JUDE WAS SO OBSESSED WITH THIS STUPID BOOK IT RUINED THE WHOLE THING FOR ME. Here she is, talking to dead people the whole book. Like seriously. She’s 16. The dead are dead. Jude was just so annoying and she was just like, “Oh look, my mom is dead so I need to totally change myself to look after her brother.” No. Just no. I understand your mom is dead but you are just too annoying. Some of the best lines did come from Jude’s part and I enjoyed reading Jude’s part more than Noah but I just didn’t like her. It was like I was reading someone who had no idea what they wanted in life. I’m not saying that the characters weren’t thought out nicely and had a powerful message behind them. They really did. They were thought out great and without them being who they were, we wouldn’t have this award winning book to read. I just could have lived without them. Let someone like Courtney or Heather tell us the whole book. Maybe even Brian, but I didn’t care for him either. Whoops.

I. Just. Wanted. These. Characters. To. Talk. So many things would have been fixed within the first 100 pages. So many things would have happened and I wouldn’t have to sit here and write about how disappointed I was in this book. Jude and Noah weren’t close anymore. You want to know why? Because the freaking didn’t talk to each other. These two would always have something that got in the way of their talking. Guess what, I got a fake phone call because I don’t want to talk to you. If these characters would have spent less time dwelling on the past, talking to dead people, and talking to people that aren’t fixing your relationship, I might have given this book more praise.

Overall, I would have to give this book a 3 out of 5. It will be one of those books that I would recommend if someone wants to read something about finding their true self but not one I would always recommend. If you also need a really good LGBTQIA+ novel, this is the one for you. I’m not sure if I will be giving another one of Jandy Nelson’s novels a try or not. I guess time will only tell.

Have you read this book? What did you think about it? Do you have any siblings? What was growing up like? When you have kids, do you plan on having one or multiple kids? Did you relate to anything going on with this book? Let me know your thoughts in the comments!

2 thoughts on “I’ll Give You The Sun | Book Review”