About two weeks ago, my dad and I were flipping through Netflix to try and find something good to watch. They had just finished one of my favorite shows, Quantico, and was trying to find their next show. We came across Bates Motel and we somehow ended up talking about how we had heard how good it was. So I decided to give it a go. And I really liked it. Like a lot. But yet, Richard Harmon has followed me into this show as well. Thanks for that. Anyway, I am here to bring you a TV show review for Bates Motel season 1, spoiler free because you should totally give the show a chance. 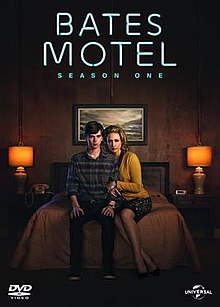 After the death of her husband, Norma Bates buys a motel in the picturesque coastal town of White Pine Bay, giving herself and teenage son Norman a chance to begin anew. Shy Norman is reluctant at first, but with the help of his mother — with whom he shares an intensely close relationship — the boy begins to open up to others and make new friends. Some locals, however, aren’t as friendly and welcoming to the Bates, who discover that because White Pine Bay isn’t as peaceful as it appears, they are forced to do whatever it takes to survive. The drama series, from executive producers Carlton Cuse (“Lost”) and Kerry Ehrin (“Friday Night Lights”) and inspired by the seminal 1960 horror film “Psycho,” explores the formative years of Norman Bates and how his complicated bond with his mother forged a serial killer.

After the death of her husband Sam, Norma Bates decides to move herself and her son, Norman to White Pine Bay to start over. Norma buys them a home… and a motel to run. Once she moves in, she realizes that she has no idea what herself and Norman have just gotten themselves into. Just as soon as Norman would open his mind up to one person, something would happen in return. As they try to make friends, they learn that they might be the only nice people in White Pine Bay.

I went into this show with knowing nothing. I knew nothing about the cast, the plot, the idea, the everything. As I was writing this post, I did two things. 1 – I majorly spoiled myself and I want to die because it is making me see everything in a different way now. 2 – I googled each of these cast members and their list of achievements and filmology is AMAZING! I was blown away to find out that the kid that plays Norman Bates was the kid from the 2005 version of Charlie and the Chocolate Factory. Like seriously! But I really liked this show. I really did.

The whole set and the location of this show was beautifully done. I had never seen the movie Pyscho but it has always been on of those I want to see. To find out that they shot the movie and the show with replicas of the house was scary to me. If you go and google both of these houses, they look so much the same. It is scary how close they were. But the location was perfect for this show. Where they shot it made perfect sense and how all the locations almost always ended up coming back into the plot.

I loved all the character that was part of this show, for the most part. I will be the first to admit this but I am not Bradley’s biggest fan and I am still not Emma’s biggest fan. I know! I don’t really care for Emma that much. I seriously think she is trying way too hard to get with a certain character. I also think that Bradley and this one other character are going to end up hooking up just because of the way that she is around him. But these characters have so much within them that we have still yet to discover. The more you watch this show, the more you learn about each of the characters and why certain things happen. When you first watch the show, you find the beginning a little weird. At least I did. Well, by the middle of the season, you learn more and more about what actually happened and the producers/writers/cast did such an amazing job with hinting this idea through the whole season.

Bates Motel was shot a little unoriginal with the whole camera angles, coloring, and editing so it was pretty decent. One thing I do really enjoy about their editing is the fact that when they are going through the credits at the beginning of the show, they are in alphabetical order. Do you realize how many shows don’t do that? It gets on my nerves so much because I want to be able to watch the beginning and see if a certain actor is in the episode or not. And this is a reason I might have high blood pressure. Thanks, dad.

For some reason, I really haven’t watched many ‘horror’ TV Shows and I really don’t know why because I really enjoy them. I seriously enjoy them. I like the suspense that comes out of them and trying to figure out how everything is going to all fit together. This show does just that. During the first few episodes, you have to try and figure out everything that might be happening with the drawings that Norman finds. Later you deal with Kieth Summers, who has been killed by Norma. We have so many things happening and it really sucks you in. There wasn’t really one dry moment through the season and I really enjoyed that.

Overall, I would have to give this show a 4.5 out of 5. It is really making me want to go and watch Pyscho since the show is based on it. There are so many things happening and I really just want to dive into the second season right now. I can’t wait to see where this show takes me. Just remember this one thing: if you decide to watch this show, give it a few episodes. The pilot episode doesn’t really do the series justice.

Have you seen this show? What did you think about it? What is your favorite season? Do you agree with anything I said? Should I go ahead and watch Pyscho? Are you a fan of horror movies or shows? Let me know your thoughts in the comments!