I have recently been watching a lot of movies for the second or third time. I don’t know why. Some of these are my favorite movies so it does make sense but why is my question. I’m not complaining because it gives me something good to review. But this is one of my favorite movies, hands down. I just love it and I think you all should go and check it out. Welcome to my spoiler free review of Revenge of the Bridesmaids because you all need to watch it. Like now. Maybe after this review. But now. 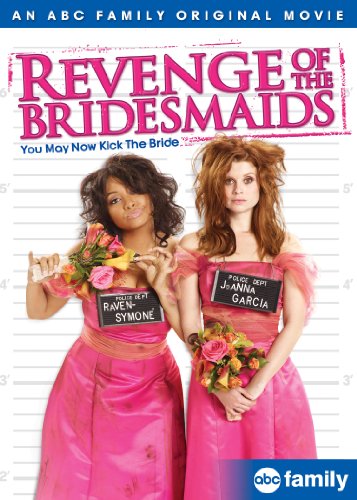 Title: Revenge of the Bridesmaids

Chaos strikes when two best friends try to sabotage a wedding for the sake of true love.

Caitlyn McNabb, Rachel Phipps, Abigail Scanlon, and Parker Wald were best friends. Well, Rachel, Abigail, and Parker were best friends. As they got older and became adults, Abigail and Parker were the only ones who left town to go to New York and stayed best friends. So when Parker’s parents celebrate their wedding anniversary, these two best friends receive the most surprising news in the world: Caitlyn is getting married… and it is to the man that Rachel still loves. Determined to help their friend, Parker and Abigail somehow need to get into Caitlyn’s wedding, and fast. With the wedding date coming, these two need a good plan to get Rachel’s man back before he marries the wrong women, for the wrong reasons.

For knowing this movie was an ABC original, it was a pretty decent movie. I mean, there were times that there was an issue with the lighting or the camera work but it was still pretty good. You could tell that the crew who was working on editing and all that they really wanted this movie to be the best they could get it.

I thought the characters were developed nicely and the cast did a great job portraying them. For the most part, I was familiar with most of the cast. There were a few I didn’t know but that is almost every movie or show I watch. There were some things with the characters that I wish would have been brought out a little more but for the most part, they all had a pretty good backstory and have a great actress/actor playing them. I found the characters very enjoyable and likable that I really didn’t have a problem with any of them.

The storyline isn’t the most original but it was directed and executed greatly. There were some moments that was totally unbelievable and totally original that I really enjoyed. I just really enjoyed the way it was written in general. There were so many funny moments that I couldn’t help but burst out laughing. So many memorable scenes were added into the movie that makes it such a great movie. I thought the script was filled with so many details with helping the viewer know what was going on and what might be happening in the future. I wish there was a little more detail in the background and the location but that is really it.

Is the movie good enough to be watched by younger kids or be put on DVD? Honestly, no. I mean if your kids are mature enough to understand the topic of alcohol, sex, pregnancy, weddings, etc, you should feel free to watch it. There is some mild language contained within the movie but it really isn’t anything really bad. But watching the movie was nothing was so special to make the movie anything other than a TV movie.

Overall, I would have to give this movie a 4 out of 5. It will always remain one of those movies that I can rely on for when I need to cheer up. And it will always remain one of those cheesy romantic comedies that you know the ending in the first ten minutes. But if you are looking for a movie that will give you a good laugh, this is the movie for you.

Have you watched this movie review? Are you big into re-watching movies? What is one movie you could watch a million times and never grow tired of it? Are you big into wedding movies or movies like this? Do you prefer horror over humor? What is your favorite movie? Let me know your thoughts in the comments!

One thought on “Revenge of the Bridesmaids | Movie Review”