I bought this book a while ago when Books-A-Million was having a buy two, get one free sale. I have heard about the movie but as a good book reader, I had to read the book first. Since the movie starred Lily Collins and Sam Clafin, I knew I had to get the book, and soon. Well, I’m finally reading it and it has brought us here. My spoiler free review for Love, Rosie. I hope you enjoy! 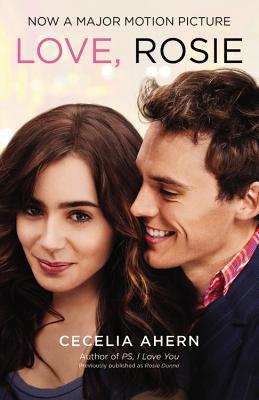 The basis for the motion picture starring Lily Collins and Sam Claflin!
What happens when two people who are meant to be together can’t seem to get it right?
Rosie and Alex are destined for each other, and everyone seems to know it but them. Best friends since childhood, they are separated as teenagers when Alex and his family relocate from Dublin to Boston.
Like two ships always passing in the night, Rosie and Alex stay friends, and though years pass, the two remain firmly attached via emails and letters. Heartbroken, they learn to live without each other. But destiny is a funny thing, and in this novel of several missed opportunities, Rosie and Alex learn that fate isn’t quite done with them yet.

About the Author: Cecelia Ahern is an Irish novelist whose work was first published in 2004. Cecelia Ahern was born and grew up in Dublin. She is now published in nearly fifty countries, and has sold over 25 million copies of her novels worldwide.

Rosie Dunne met Alex Stewart when she was four years old. From that time, they were best friends and they did everything together. Same class, same activities, same friends, got drunk together, got suspended, same thoughts. When they were seventeen, Alex’s father got a job promotion and moved his family to the States. Out of nowhere, Rosie’s life changes forever when she gets pregnant when Alex couldn’t make it home for the debs. With each of their lives changing, these two are finding it harder and harder to get in touch, despite them being best friends.

Have you ever read a book that you have both hated and loved at the same time? This has to be one of those cases for me. The overall book was amazing and so adorable but I wanted to through it against a wall. And it isn’t like I just read a book where I loved the past romance so much that I didn’t give the characters a chance. That didn’t happen. *cough Bellarke cough*. I was sitting there thinking, when is this going to end. We all know this is going to happen so just let me skip the next 200 pages and let me get to the end of the book. Did I regret reading the book? In your mind, you might be thinking yes. In reality, no. I am happy I gave the book a chance. Now, every time I come over to my corner in my room to write a review, I don’t have the book staring me down, telling me to read it. I sit on the carpet sadly. I ordered a chair and it was supposed to be here three days ago. It still ain’t here. Sorry for my little Southern rant.

I loved the way this book was written and the setup of it. It was nothing like I have seen before. I thought it was really interesting… for the first 100 pages. I started to get annoyed with it by the middle of the book. The book is setup like Alex and Rosie (and others) were sending letters, emails, DMs to each other. The whole entire book. Well, all the chapters but the last one. I liked being able to read the whole book in that direction but I just didn’t get a lot out of the dialect. I would rather read a book that switched perspectives compared to this. It was neat to actually have a few quirks about terrible spellers out there in the writing because both Katie and Alex spell know as no. Yes.

Time jump madness. There was like a time jump every conversation. One minute Rosie might be 28 but the next she turns 30. I wish it was one time frame or that the times changed with each of the different section. I just feel like that was one of the downfalls of the novel. If the book didn’t jump around as much as it did I might be able to enjoy it a little more. It made the whole story go by way too fast and I just wish Cecelia Ahern would have extended some of the scenes. And as I got further into the book, the short the time got. We spent a good 150 pages when the two were 20 but after that, each age group only got about 75 pages or so.

The relationship that Alex and Rosie had was cute but it was one of those relationships where no matter what one character did, they would still love each other. The one friend could probably get away with murder and they still would be best friends. Yes, the book is a romantic book and all but the whole relationship seemed a little forced. It might just be me who saw that but I felt that way. I did love their friendship. I loved all the twist and turns that occurred. Once they get older, without spoiling it, you see the friendship shift through the years, and it was interesting to read how the two handled it while they were a million miles away. That part I loved. Some of the relationship did seem a little strange and I feel like parts of it were made up by each other but I liked the relationship.

I was expecting myself to laugh a little more than what I did. The book was decent but it just wasn’t as humorous as I thought it would be. I laughed a lot through the beginning. Alex and Rosie are young kids. They are always doing funny things. We are always doing funny things. (Guys, I’m only 16 here). But when it came to the rest of the book, I just didn’t see the humor. It almost seemed like the book the book was only half planned out and then never edited near the end.

Since we got to see the characters grow up through the book, I was expecting this character development. I half got it. Let me explain. Katie had to be my favorite character and she has to grow the most through the book. With everything that happens to the characters, I expected a big growth between them but I just didn’t get it all the way. I had this image of how the characters are going to look after this thing happened or that thing but honestly, they failed to hit the spot. I loved the characters though – other than Ruby who is a character you meet later in the book.

It’s sort of hard for me to explain what all I did like about this book. I can say this. I love the story idea behind it: two best friends and the real life struggles that may occur within them. I love the uniqueness and the differentness of the setup of the book. I just really loved the letter idea. I loved what all happens. But at the same time, I just didn’t love the book like I thought I would. This whole review has been sort of hard for me to write as you could tell by reading it.

Overall, I would have to give this book a 3 out of 5. The writing was unique and the setup was very different from other books. The book was light, sweet, and fun to read but I just didn’t enjoy it as much as I thought I would. I’m debating about the movie because I really don’t know what to expect with it. If you are looking for a light romance novel, this is the book for you. And I really don’t think I will be giving another Cecelia Ahern novel a try. I just really don’t want to be disappointed because I have heard nothing but good things about it.

Have you read this book? What did you think about it? Did you watch the movie? Should I watch the movie? Was the book or movie better? Who was your favorite character? Should I give Cecelia Ahern another chance? What book should I read if I do give her another go? Let me know your thoughts in the comments!