Back in March, I read Lily Collins’ Unfiltered and I loved it. The book basically described her whole life, including her struggle with eating disorders. Recently on Netflix, she starred in a movie that dealt with eating disorders. Ever since I found out about this movie, I have wanted to watch it. Since the movie released when I was on vacation, without wifi, I haven’t gotten the chance to watch it til now. We all know where this is going, right? Welcome to a spoiler free review of To The Bone because you all should go and watch the movie when you get the chance. 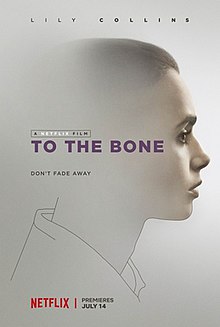 Title: To The Bone

Ellen is an unruly 20-year-old anorexic girl who spent the better part of her teenage years being shepherded through various recovery programs, only to find herself several pounds lighter every time. Determined to find a solution, her dysfunctional family agrees to send her to a group home for youths, which is led by a non-traditional doctor. Surprised by the unusual rules, Ellen must discover for herself how to confront her addiction and attempt self-acceptance.

20-year-old Ellen has been to countless inpatient treatments for her battle with anorexia. As a child of a divorce, many people believe that is the cause of her eating disorder but she won’t budge when you ask. With the help of her stepmom, Ellen is now getting help by one of the best eating disorder doctors, despite his random practices. But when Ellen finds out it is another inpatient treatment, she questions if she wants to go. Will Ellen be able to help herself before it is too late?

The cast of this movie was phenomenal. I have recently been obsessed with watching old clips and bloopers from the show True Blood and here Carrie Preston was, playing a role in the movie. Lily Collins is just amazing in general. I actually only knew who these two were in the movie. I had no idea who any other cast member was. I know, I should have known more but I didn’t. But every cast member they picked out for the show was amazing and they played their roles the best as they can.

There really wasn’t that much to each of the characters. You really don’t get to see that much of the star, Ellen, through the movie either. You see the outside layer of herself and that’s really it. You don’t really get to find out what the other patients in the home are in for – you just get the basic eating disorder story. There was one part of the movie that you really get to see Ellen’s true self comes out and it is near the end of the movie when it occurs.

The writing of the movie really wasn’t that well either. There really was no flow to the movie. You saw something happen and if you get a question for it, you probably won’t get an answer for it because the writers didn’t continue it. While I was watching the movie, I sort of felt like the writers were half asleep when they were writing the movie because there really was no purpose to some of the stuff they added in. There were no quotes that really stood out, where there should be a few from every movie (My recent one is: if you wish for a unicorn, you get a goat). That also attributes to the lack of character development through the movie. I would have liked to start from the beginning of Ellen’s story of her battle and not in the middle of it. I wanted to know what actually caused her eating disorder and I still want to know because I don’t think they ever explained it in the movie.

While I wasn’t a fan of the writing and the character development, I did find the directing of the movie quite enjoyable. There were moments where I thought that the lighting or the music really didn’t fit into the scene but that is basically every movie for me. There was something special about the directing of the movie for me. Marti Noxon will be one of those ‘must watch’ directors for me now. But if the whole script for the next movie I watch is as bad as this one, I’m removing her from this list.

I have never struggled with any eating disorders but I have known people who have. That’s why I find this movie a little unfair to write the review about. The movie to me does teach a great lesson about what eating disorders can do but I honestly feel like it doesn’t get to the emotional level as hard as other things. I did end up crying during the middle of the movie and I really don’t know if it was because of the message or the relationship was started in the middle of the movie. If you don’t pick up on the eating disorder theme (which how could you forget), you pick up the value of family and that you are important to someone out there. The movie does open up a bunch of new topics and the discussion of eating disorders. I can already a few more movies coming about this in the next few years.

Overall, I would have to give the movie a 3.5 out of 5. The movie was really thought out, written okay, and had a great message but there was the lack of character development in some of the other characters. If you liked Lily Collin’s novel, you should totally give the movie a try. If you do struggle with an eating disorder, you might want to put the idea of watching the movie away because it might trigger you.

Have you watched this movie? Did you read Lily Collins’ book? What did you think about them? What was your favorite thing about the book or the movie? What is your favorite Netflix original? Let me know your thoughts in the comments!

2 thoughts on “To The Bone | Movie Review”