I’m signed up to receive emails from a place called Bookbub. Each day I get an email from them and I always read them to see if there is any free ebooks. Even though I prefer to read a physical copy of a book, I still read an ebook here and there. The other day was one of those days. I’m bringing you a spoiler free review for Jessica Wood’s Promise to Marry and you might find your next read! 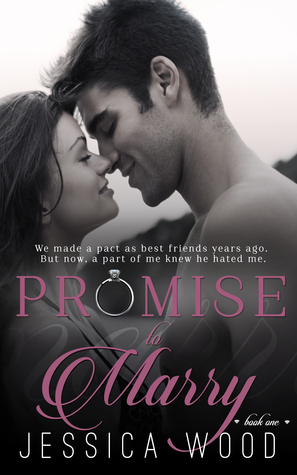 This is not your cookie-cutter childhood best friend love story.
We were best friends since as early as I could remember. We grew up together. We were next door neighbors. We shared each other’s deepest secrets. When I was thirteen, we made a pact: if we were still single by the time we were 30, we’d marry each other.
Today was my thirtieth birthday. I was single. I knew he was single too.
But we were no longer best friends, and a part of me knew that he hated me.

While she has lived in countless cities throughout the U.S., her heart belongs to San Francisco. To her, there’s something seductively romantic about the Golden Gate Bridge, the steep rolling hills of the city streets, the cable cars, and the Victorian-style architecture.

She loves a strong, masculine man with a witty personality. While she is headstrong and extremely independent, she can’t resist a man who takes control of the relationship, both outside and inside of the bedroom. 😉

She loves to travel internationally, and tries to plan a yearly trip abroad. She also loves to cook and bake, and—to the benefit of her friends—she loves to share. She also enjoys ceramics and being creative with her hands. She has a weakness for good (maybe bad) TV shows; she’s up-to-date on over 25 current shows, and no, that wasn’t a joke.

And it goes without saying, she loves books—they’re like old and dear friends who have always been there to make her laugh and make her cry.

The one thing she wishes she had more of, is time.

Chloe and Jackson were best friends from the time she was seven to college. Then something happens and they don’t talk to each. Jackson actually hates Chloe. Just because Chloe knows he hates her, doesn’t mean she forgot about the pact that they made when they were kids – if they were thirty and they both were single, they would marry each other. Now Chloe and Jackson and thirty and single. But with Jackson mad, will their pact still live out?

The whole premise of the book sounded really intriguing and it sounded different. I’m not a big adult contemporary reader so I decided to give it a try, since it was free. But I was sort of let down a little through reading it, not just because of the size of it but the writing was a little confusing at times.

Jessica Wood is a good writer but I didn’t like the set up of this book. I was expecting the book to take place when both Chloe and Jackson were thirty but most of the book took place while they were kids. We had the whole cliche relationship of best friends then hating each other but the other can’t stop thinking about the other. There were very little character development (we don’t find out some of the most important details til the end of the book), the story line wasn’t really there, and some of the stuff that was put in the book I just didn’t like.

But Jessica Wood has me wanting to read the second book in the series. Once she gets on a roll, you really want to continue on. There was a really big cliff hanger at the end of the book and I need to know what happens after that. The ending basically set up the whole entire book. And yes, you won’t be reading that long to get to the end of the book. It only took me about an hour and a half to read the entire book and I was talking through it. Jessica Wood has created this world that I don’t know if I want to go back and read more or not.

One thing I found very interesting in the book was how mature Jackson and Chloe seemed. Like I said before, you spend a lot of time seeing how they first interacted. For some reason, they talked and acted like they were 37 instead of 7. I know that some kids are mature for their age but the way they described Jackson, he did not seem that mature. Then there were some of the time jumps that happened and you are there wondering what happened between characters in the years that past. I’m quite glad that they were there because if they weren’t I would not be finishing this book.

Overall, I would have to give the book a 3 out of 5. I wasn’t the biggest fan of the book overall and I am happy I didn’t go and pay money on it but I want to go and read at least the second book because I have some questions on some stuff that happened. But I’m not going to go out of my way to find the next book in the series.

Have you read this book? What did you think about it? Do you think you will be giving the book a try? Have you read any books similar to this? How’s the book you are currently reading? Would you recommend it? Let me know your thoughts in the comments!