As you all know, I came back from vacation yesterday and it was all bittersweet. More than likely it will be the last time that I would be staying in the home that I did and be doing some of the things I did. But when you go on vacation to somewhere you have gone for 95% of your life, you have some traditions set in stone. I actually thought about not writing a post about this but there are some hilarious that I can’t help but share.

When I last went up to go on vacation, my cousins had a lot of other things going on so we really didn’t get the chance to hang out with them. One thing we did start last year was go out to play mini golf. There’s this ice cream place in town that has a mini golf course so we had to go and play the holes. The place closes at 10 p.m. but we didn’t leave the place until about 10:40. The previous year had been the first time I had played mini golf in a few years so I was warming up and none of us really did well. This year I ended up getting 62 so it really wasn’t that bad of a score compared to the other ones. But my sister was the life of the party because she kept missing and getting the ball to go backwards.

My sister is 13 years old and she is basically terrible at anything that involves sports. So, mini golf is no other story. The last time we went, she kept hitting the ball into the bushes, making a hole in one backwards (true story), and hitting the ball to go backwards. In our little group, we have my two cousins, myself, and my two sisters. We all thought that my sister would have gotten at least a little better since the last time, which she did but she still ended up with a score of 127.

At first, we thought we were going at a good pace. There were still people out there playing even though it was 9:45 and there were people two holes in front of us. It was taking my sister about 7 to 9 strokes per hole but she she was staying in the course. Then we got close to the bushes and she started to hit it like we were playing actual golf. She went searching for the ball almost one every two holes and kept going backwards. There were times she was hitting other people’s balls. At one point of time, she ended up hitting my ball backwards! About hole 8, my one cousin, my other sister, and myself started the next hole and since she was taking so long. We were still waiting at least three minutes because it took her so long. We did get a kick out of all the times she almost got close to the hole but jumped over it.

I did get my revenge on her when we finished the game. The last course is one where you hit the ball up and you only get one try since the balls go back to the bucket in the store. When I went to hit my ball, the golf club comes up a little to high, my sister was standing too close and I go and wack her in the stomach. Whoops. I also ran into one of the post that you can write the scores but we don’t need to go and talk about that. 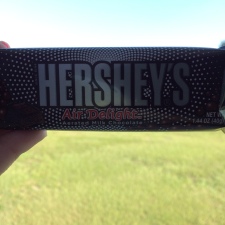 One of my favorite chocolates are these Hershey Air Delights. They have these tiny air bubbles in the inside and the chocolate is just so light and fluffy. I have been looking for it for about a year. One day I could find it and the next day I couldn’t. I have been trying to look for it in any of the stores or gas stations that I went into but they didn’t have it. My mom picked up a book in another store with all the stores and attractions in the area even though she had lived there for 30 some years. My mom remembered about this one candy store that had thousands of candy varieties so she thought they might have the chocolate I wanted. We walked in and I was amazed. There were so many candies and chocolates that I have never even heard about. There were some from when my mom was a kid and some that I haven’t had in years.

We walked around the store and I wasn’t having luck with the searching. I looked up and down, side to side for it. My sisters picked up a few things and so did my mom. We even picked up a birthday gift for my dad but we could not find my chocolate and I was giving up hope. And then I saw it. I saw the box of my dreams. A box of 24 bars and it was in my arms. I have eaten two of them so far and I am still in love with them. If you can ever get your hands on one of these things, you need to try one because they are my second favorite chocolate, behind dark chocolate. They should make a dark chocolate version of this chocolate bar.

I was so lucky to be able to hang out with my cousins a lot more than what I have been in the past, even though it was about 9 pm to about 12 am. We talked about all these crazy things that has been working in our life, promposals, and Hamilton. It was really good to know that I was not the only one in my family that loves Hamilton. My one cousin and I are crazy about our schedules and we can only do certain things. If you have watched the show The Big Bang Theory, my cousin and I are basically like Sheldon Cooper but her dad agrees that I am slightly more crazy than she is.

But when I was hanging out with my cousins this year, it should me how close I was to them, really. As a kid, my one cousin and I really weren’t close despite being born 5 months before me but now we are pretty close. There is video evidence to prove it and somehow we end up talking about this video every time we come. But I was real close with my other cousin. She’s about three years older than I am and we are so similar. We went out for dinner the one day and we both were planning on getting the same thing. My mom was sitting in front of me and go and say something about never being able to finish it. My cousin was sitting next to me and she was thinking about the same thing I was. Even though we ended up sharing a meal with only six pieces of chicken and a small order of fries, we were still unable to finish the meal. Anyway, we started talking again and somehow we brought up the fact that all of a sudden my cousin the same age as I suddenly became like best friends. We would buy similar things, text back and forth, and do a lot together when I was in town.

I’m really luck to be this close with my cousins. My sisters aren’t as close to my cousins as I am but they can’t blame anyone but themselves. You know when you don’t try to get to know someone, that is my sisters. They really never tried to know my cousins and they like to blame it on them. They never wanted to join us when we would dance in the rain or go and help with dinner. I know that there is some people that never even get to meet some of their family and I am lucky to know mine. My cousins and I have such a great time and we have so many great memories that they are one of the reasons that I continue to go back there. I don’t go back because of the Barnes & Noble or any other stores, I go for my cousins. So shout out to you Courtney and Kenzie. Thanks for giving me a reason to come back.

Are you any good at mini golf? Do you prefer actual golf or mini golf? What is your favorite type of candy? Favorite type of chocolate? Do you like candy or chocolate better? How close are you to your family? Are you going on vacation or have you been on vacation? Where are you or where did you go? Let me know your thoughts in the comments!