This show really likes to make me discover new things and second guess literally everyone. One minute I can love a character and the next, hate them. I learned a little more about what tears are through this show. I’m going right out and saying this but if you don’t want to be spoiled, you better not read this because there are going to be a lot of characters. Let’s get into my review of season 2 of The 100. Make sure you check out my review for season 1 before you read this one because there are some big differences between them! 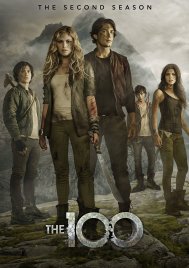 Set 97 years after a nuclear war has destroyed civilization, when a spaceship housing humanity’s lone survivors sends 100 juvenile delinquents back to Earth in hopes of possibly re-populating the planet.

Clarke Griffin has found herself and 47 of her friends in the Quarantined Area of Mount Weather, the place they should have gone to at the beginning. Clarke doesn’t get why the are only 48 of them there and where these people where before the attacks. She also wants to know two things: where her friends Bellamy, Raven, Flinn, Murphy, and several others are AND why did these people know their names. Clarke doesn’t get a good vibe from them and she wants to get out. Will she be able to get of Mount Weather before all of her friends are taken by Grounders?

Watching the process of a Grounder becoming a Reaper was both heartbreaking and sort of cool at the same. Mount Weather was the ones in charge of that acid fog and the Reapers. Bellamy and Lincoln go and sacrifice themselves to find the grounders and the sky people but their plan doesn’t work 100% because of the fact Lincoln was already a Reaper. Lincoln is just so sweet and caring that I could not stand to watch him go through that. Those injections looked painful and I would kill someone literally if they tried to do that. I liked seeing how they became Reapers but after the fact they were Reapers broke my heart. Thank you for that being the reason President Wallace (the young and evil one) died and his hand getting chopped off.

Did anyone else get Game of Thrones vibes from this season? Firstly, the theme song/intro thing brought so many GoT vibes to me with the song and the fact that it was going to different locations. Then we have all the different groups that come out of everywhere and the hatefullness that came between a lot of the groups but one person could change it. Clarke also looks a little like Daenerys, well at least to me. Plus, the language that the two shows have were actually done by the same person?!?!

This season had a totally different vibe from the first season and for the most part, I enjoyed it. The writing of the season was pretty good and it did leave my confused in a good way because I want answers. Especially after the end of the season. Hello. There is a huge house with this hologram person who you expect me to think picked up a missile and place it in the house? And where is the homeowner of where Murphy is? What was that creature that was in the water? Is it the same creature as the one that tried to eat Octavia in the first season? I need so many answers! Plus, when is Clarke and Lexa going to officially hook up? Yes, Clarke killed Finn like not that long ago (RIP 😦 ) but they kissed and they both enjoyed it. But I get the sense that Lexa is going to die because almost everyone Clarke gets close to dies.

The character development that was shown through the season from the last episode of season 1 until the last episode of this season was meticulously planned out. We saw so many characters grow up because of what they had to go through. And the winner of the whole award has to go to Jasper. I keep having to pinch myself to remind myself that is the kid from Diary of a Wimp Kid because I can’t believe it. Jasper found someone he loved and had to battle himself to her. Then she had to die with the help of his best friend. He had to step up and become a leader when Clarke and Bellamy where not there. Jasper grew up so much and I love him even more now. I still have the same feeling of hate, well dislike, for Abby and Marcus and now even more for Raven. Plus Jaha because he is just mental now and I think he needs to go back into space before he goes even more mental. He should have never have went to see his son, or even have came down to Earth. Maybe those bugs he ate at the beginning of the season are eating his brain.

The directing of the first and second season seemed to me to be about the same. I did like how the cast got the colors to go along with them a little more and the rest of the 100 kids that were not at Mount Weather started to blend into the grounders. There are scenes that looked so real like when Finn burned down that building or when the grounders were getting the blood drained from their body. I loved how they are still shooting out in the woods instead of a green screen because it adds so much more light and nature to the show. I like how the directors and the editors switched back and forth through Mount Weather, the Ark, Clarke, and then all the other characters that were on their own.

Overall, I would have to give season 2 of The 100 a good 4 out of 5. I really don’t know if I liked season 1 or season 2 better because they were so different but they were both pretty good. The story line is so good and it is making me want to watch more and more of it. I need to know where Clarke is going and where Jaha and Murphy are because there are so many things I need answers for. I’m excited to see where the rest of the show is going!

Have you watched The 100? Who was your favorite character? Who was your least favorite? What would you do if you were in their shoes? Did you enjoy season 1 or season 2 better? Let me know your thoughts in the comments!