I don’t know why I don’t do this more often because I really like doing these. I feel like I put that every time as well. A few months ago, well lets be honest, about half a year ago, I did an Author Talk on Tahereh Mafi. One thing I love about Tahereh Mafi is the fact that she is married to another author, who I really like. Now, Ransom Riggs and Tahereh have a little baby girl and I would like to congratulate them! Because I am full of useless information and I really like learning stupid stuff, here is some information about a go to author of mine, Ransom Riggs.

A Little About Ransom Riggs:

Hi, I’m Ransom, and I like to tell stories. Sometimes I tell them with words, sometimes with pictures, often with both. I grew up on a farm on the Eastern shore of Maryland and also in a little house by the beach in Englewood, Florida where I got very tan and swam every day until I became half fish. I started writing stories when I was young, on an old typewriter that jammed and longhand on legal pads. When I was a little older I got a camera for Christmas and became obsessed with photography, and when I was a little older still my friends and I came into possession of a half-broken video camera and began to make our own movies, starring ourselves, using our bedrooms and backyards for sets. I have loved writing stories and taking photographs and making movies ever since, and have endeavored to do all three.

“My name is Sherlock Holmes. It is my business to know what other people don’t know.”
This reader’s companion to the casework of Sherlock Holmes explores the methodology of the world’s most famous consulting detective. From analyzing fingerprints and decoding ciphers to creating disguises and faking one’s own death, readers will learn how Holmes solved his most celebrated cases—plus an arsenal of modern techniques available to today’s armchair sleuths. Along the way, readers will discover a host of trivia about the master detective and his universe: Why did Holmes never marry? How was the real Scotland Yard organized? Was cocaine really legal back then? And why were the British so terrified of Australia? Full of fascinating how-to skills and evocative illustrations, The Sherlock Holmes Handbook will appeal to Baker Street Irregulars of all ages.

A mysterious island. An abandoned orphanage. A strange collection of curious photographs.
A horrific family tragedy sets sixteen-year-old Jacob journeying to a remote island off the coast of Wales, where he discovers the crumbling ruins of Miss Peregrine’s Home for Peculiar Children. As Jacob explores its abandoned bedrooms and hallways, it becomes clear that the children were more than just peculiar. They may have been dangerous. They may have been quarantined on a deserted island for good reason. And somehow—impossible though it seems—they may still be alive.
A spine-tingling fantasy illustrated with haunting vintage photography, Miss Peregrine’s Home for Peculiar Children will delight adults, teens, and anyone who relishes an adventure in the shadows.

The first book in the series has been adapted into a movie directed by Tim Burton and written by Jane Goldman. The movie stars Asa Butterfield, Eva Green, Samuel L. Jackson, and etc. It was released on September 30, 2016. Little is known about if there is going to be a sequel to the movie, adapted from the book Hollow City. Along with becoming a movie, the series have been adapted into a graphic novel, illustrated by Cassandra Jean, who also did The Infernal Devices graphic novel. There is word that there are going to be three other books in this series but there is no other information on that.

Talking Pictures: Images and Messages Rescued from the Past 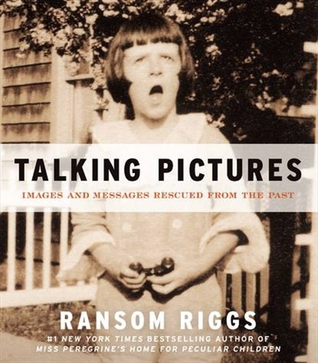 With the candid quirkiness of Awkward Family Photos and the confessional intimacy of PostSecret, Ransom Riggs’s Talking Pictures is a haunting collection of antique found photographs—with evocative inscriptions that bring these lost personal moments to life—from the author of the New York Times bestselling illustrated novel Miss Peregrine’s Home for Peculiar Children. Each image in Talking Pictures reveals a singular, frozen moment in a person’s life, be it joyful, quiet, or steeped in sorrow. Yet the book’s unique depth comes from the writing accompanying each photo: as with the caption revealing how one seemingly random snapshot of a dancing couple captured the first dance of their 40-year marriage, each successive inscription shines like a flashbulb illuminating a photograph’s particular context and lighting up our connection to the past.

My Thoughts on Ransom Riggs:

I’m a big fan of Ransom Riggs’ stories. He has this essence in his writing that makes you feel that you are really in the story. Inside the Miss Peregrine’s series, he included these really creepy images that just made the book seem real. When you start a Ransom Riggs book, you should prepare yourself about the fact you are going to be sitting all day, reading that one book. The world that Ransom Riggs is able to create is a masterpiece and his books should be treasured. I can’t wait to read some other books written by Ransom. Maybe even a collaboration between Ransom and Tahereh? That would be one awesome book. Let’s make this happen!

Have you read anything from Ransom Riggs? What did you think about it? Which is your favorite book and why? Who is another author you would like to see me do this with? Let me know your thoughts in the comments!