Welcome back to a week of scheduled post because it is EXAM WEEK. Ugh. One thing I am really happy about, other than school ending, is the fact my English teacher can not tell me what books I can or can not read. Most of the books I have to read this year have been terrible. Like I hated Things Fall Apart and I really didn’t care for The Kite Runner. This book has to trump all of them because it was terrible. But, welcome back to another review written by yours truly without any spoilers for you future readers. 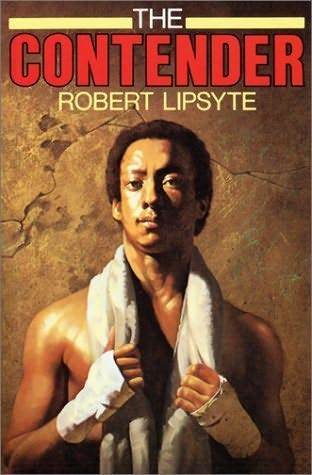 A Harlem high school dropout escapes from a gang of punks into a boxing gym, where he learns that being a contender is hard and often discouraging work, but that you do not know anything until you try.

About the Author: Robert Lipsyte is an award-winning sportswriter for The New York Times and was the Emmy-winning host of the public affairs show The Eleventh Hour. He is the author of a number of acclaimed novels for young adults, and is the recipient of the Margaret A. Edwards Award honoring his lifetime contribution in that genre. Robert Lipsyte lives in New York.

The Contender follows the story of Alfred Brooks. Alfred is not like the people he hangs out with. He has a job, even though he dropped out of high school, and he doesn’t partake in drugs and alcohol. His best friend is the opposite of Alfred. Now, his friend is arrested for breaking into the store Alfred works for. Alfred feels like it is his fault but there is nothing he can do. Alfred has taken off and needs to get away from his ‘friends’. That’s when he finds out about fighting, but he doesn’t know if he can do it or not.

I really didn’t have a good time while I was reading this book and it was not because I was required to read it for a class. The whole book didn’t really make seem to have a big focus and the story was a little ‘used’. I felt like I have read a million books just like that one. I had no problem following the story line but the book didn’t seem to be thought out well. I felt like there wasn’t enough description through the book, which made it bland, and the same thing was taking place over and over again.

The friendship that was through the whole book was really nice. Alfred and James had each other’s back at the beginning and at the end of the book. I really enjoyed how the book showed how friends might turn their backs on each other but they will always want you to help them. Alfred was seen through the whole book making new friends while he was fighting and even though James was arrested, Alfred still thought about him. He still cared and thought about him.

If you were to ask me what the whole point of the book was, I really don’t have an answer for you. Fighting was a symbol for strength in the book but I felt like that was the only thing it was good for. I didn’t see what is so amazing about this book since almost every person in my class likes it. Reading the book was a job for me and I was so happy when I finished it. And reading should not be a job, it should be for fun. The symbolism though was greatly shown with the fighting, which I am not going to tell you. I just wish it was a bigger role through the book.

(I also feel like I have used the phrase, “through the book,” way too much. I wrote this review on paper after a test in school.)

Yes this book was written in 1967 but I still has a lot of trouble reading and understanding the book. I was not understanding everything that all the characters were saying. Like I said before, I didn’t find much detail in describing stuff. Details are one of the most important aspects in a book, at least to me. The dialogue was off and I just couldn’t comprehend it, and I’m the one who read Homer when I was in 8th grade. Yep, I was that kid. The writing was just bad and it was not going anywhere for me.

Overall, I would have to give this book a 1.5 out of 5 stars. And I think that this is the lowest I have rated a book in a while. I liked the symbolism but that’s about it. I enjoyed the friendship between James and Alfred as well. I was so happy when I finished that book. If you are interested in finding your true self books, along with the world of fighting, this is your book. I just really didn’t enjoy this book as others have.