My top viewed post of all time, this year, AND last year was my review for the book Everything, Everything by Nicola Yoon. If you know me, you would know that is one of my favorite books of all time. Now, there is a movie for this book and I got the chance to finally go and watch the movie! Even though there were some differences, I still have to say that it was one of the closest YA adaptations I have seen this year. If you have not watched the movie and you don’t want to be spoiled, don’t read this review. I have way too much to say and the review needs to have spoilers in it. 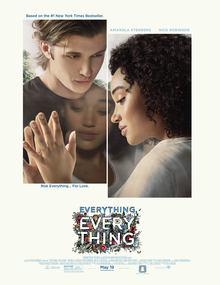 A teenager who’s spent her whole life confined to her home falls for the boy next door.

When I first watched the trailer for the first time, I had some interesting thoughts go into my mind and this reaction post I did. I still really don’t know how to put my thoughts into a review but I am going to try my best.

Everything, Everything follows the life of Madeline Whittier, a 18 year old girl who has a rare condition called SCID. SCID keeps her from doing one of the best things in the world, going outside. When the new family moves in next door, she knows that she wants to get to know the son, Olly. And it looks like Olly wants to do the same. But with her over protective mom, Madeline knows that is never going to happen.

I liked how close the movie got to the book. It got Olly’s bright colors and Maddy’s boring life. I like how the two of them actually do go off to Hawaii and the fact that Maddy would risk her life for Olly. The ending is another story. I don’t know if I liked the ending of the book or the movie better. The movie had the two of them married and Maddy forgiving her mom while living in New York. In the book, the two of them do go and meet up in New York at the bookstore. I liked how the book ended but with the movie, we got some more answers on the two of them. YOU JUST HAVE TO STAY TIL THE END OF THE CREDITS. I should know this by now because of the million times there is something going on after the credits. Oh well.

Something that did get on my nerves and my sister’s as well was the fact that there was a scene where Maddy was wearing a bra, then no bra, then yes bra. I also know the guy that was sitting the row ahead of me noticed it because he told his friends, “She’s not wearing a bra,”. It wasn’t like Amandla Stenberg could get away with it either. It was pretty noticeable. What can I do about that?

The cast and crew did a pretty good job with working with the movie. It showed the relationship between Olly and Maddy perfectly with the directing, even though there were some really cheesy moments when it came to the first time that Maddy saw Olly. I guess that brings out the crazy part of Maddy, like the astronaut that was in the book and movie, which made me really happy for some reason. The cast had a great relationship and they knew what they were doing greatly. They knew who their character was and they lived their life their character lives for a while. There were times that I didn’t understand the relationship between Maddy and her mom, and also Olly and her sister. Before this movie, I didn’t even know Olly’s sister’s name or their last name. The crew did a fabulous job with the lighting and the editing to get Maddy and Olly’s text to look like conversations in person. They brought this house to life better than what I expected, which put a smile on my face as soon as I saw the room with the mirror.

If you got the feels when you were reading the book, you will get the feels while watching the movie. I had to tell myself not to cry while I was watching this movie because I was not going to have a repeat of The Fault In Our Stars. Especially when the movie got to the part when Maddy’s heart stopped and came back, I couldn’t take it. I might have had to water coming from my eyes but they were quickly removed. There are times that I couldn’t help but laugh because the lines were so funny like when Maddy and Olly where in the car and Maddy ask about how fast they were going. There were cheesy moments and times that I wanted to walk out of the theater, and it wasn’t because I needed to go to the bathroom.

Overall, I would have to give this movie a 4 out of 5 stars. It wasn’t perfect but it kept with the original story line and they really didn’t change that much in my mind. I know that there will be another watch of this movie from me when this movie comes out to DVD because I will be looking for some stupid stuff with the book in my lap. I think I found this movie better than The Fault In Our Stars to be totally honest with you all and it is not because I read the book before the movie was like ‘official’. I’m really happy I got the chance to watch this movie before it left theaters. Thank god for my theater’s $5 Movie Tuesdays! If you did enjoy the book and TFIOS, you will want to jump on the opportunity to watch this movie soon!

Have you seen this movie? What did you think about it? Did you know the book was being turned into a movie when you read it? Who is your favorite character? Did you like TFIOS or Everything, Everything better? Let me know your thoughts in the comments!