One thing I love about my iBooks app is getting free books. Getting free books is the best. I’m not one who will always go and read on their phone because I like having the physical copy in my hand but if I find a book that I want to read, I’ll read it on my phone. The other day I was searching just randomly when I saw the cover of this book. Once I saw that it was free, I said why not and I ended up reading the book in less than 24 hours. Whoops. But, beware of the spoilers that may come out of the review because it’s gonna get icy… 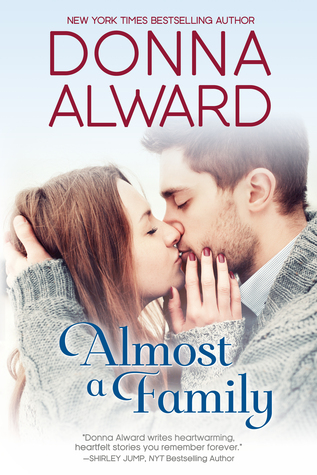 What do you do when the boy next door turns out to be the only man you’ve ever loved?
When her sister is badly injured, Molly Schaeffer rushes home to look after her niece, Sara. Discovering that her ex, Jason, is living next door makes the task nearly impossible. Six years ago he’d had their lives all mapped out – where they’d go to school, the house, the number of kids they’d have – but Molly refused his ring and broke off the relationship to pursue her own dreams.
The last thing Jason expects is to have feelings for the woman who broke his heart so completely when she chose her career over a life together, but clearly things weren’t as over as they thought. She’s only home for a few weeks and they both know she’s going back to her successful career. Still, neither manage to keep their distance as old sparks ignite a new flame. Can they learn from past mistakes and give their love a second chance, or is this goodbye for good?

About the Author: While bestselling author Donna Alward was busy studying Austen, Eliot and Shakespeare, she was also losing herself in the breathtaking stories created by romance novelists like LaVyrle Spencer, Judith McNaught, and Nora Roberts. Several years after completing her degree she decided to write a romance of her own and it was true love! Five years and ten manuscripts later she sold her first book and launched a new career. While her heartwarming stories of love, hope, and homecoming have been translated into several languages, hit bestseller lists and won awards, her very favorite thing is when she hears from happy readers.
Donna lives on Canada’s east coast with her family which includes a husband, a couple of kids, a senior dog and two crazy cats. When she’s not writing she enjoys reading (of course!), knitting, gardening, cooking…and is a Masterpiece Theater addict. You can visit her on the web at www.DonnaAlward.com

The story follows this high fancy lawyer named Molly who comes back to take care of her sister’s daughter after a terrible accident. Along comes with the next door neighbor, Jason, who happens to be a veterinarian and also Molly’s ex boyfriend. After ending on terrible proposal, Molly and Jason have not seen each other since. Now, they are forced to work with each other for the sake of Molly’s family. Will these two come together at the end or will the end up hating each other even more?

The book was written well but it was a little predictable for me. The book had a great flow and it didn’t feel like I was reading forever. I especially loved reading the parts when Jason and Molly were together because you could see how amazing they were. I felt like the book was nothing new and the idea really wasn’t original. I wasn’t expecting it to be shocking or original but it could have been better.

The characters were really well developed, which led to the book being well written. I really loved all the characters and I loved being able to watch Molly grow up in a sense. Molly started the book being really stuck up and really annoying. As she started being Sara’s watcher, she started to grow up and really see what she has been missing from her life. By the end of the book, she quits her job and she realizes that family is truly important. Life shouldn’t be used to do things that you don’t love to do. Jason was one of the characters that really didn’t grow up until the end of the book. He sort of remained the same until the day Molly helps with the dog that got hit by and car and she finds the engagement ring from 6 years on the shelf. He realizes that he planned their life to be focused around him and he never thought about Molly or the ones around them. Even though she was only four or five, Sara had to be my favorite character. She was such a kind and caring person that I wish that I knew in my life. She was hilarious, especially when it came to Jason and Molly kissing in the snow. I could just imagine a little girl saying all of the things that she said.

The book was one of them that I couldn’t put down for some reason. I was actually watching some movie when I ordered the book and I read like 350 pages in less than two hours. I sort of fell in love with the characters so it was hard to say goodbye. I also really wanted to know about the relationship between Jason and Molly’s sister, Kim, because it looked like they had some history together. The book was a quick and light read as well.

Like I said earlier, I had to give this book a 3 out of 5 stars. The book was a light and quick read so it made reading it fun. I didn’t think the book was really special and it really isn’t a book that I wouldn’t really read it again. I’m happy that I read the book and I read something that I wasn’t used to reading. Hating myself right now for admitting this but the cover was what made me buy it. I really like the cover, it might be one of my favorite covers from this month, so at least I have a pretty cover in my iBooks collection. If you like romantic novels and don’t mind predictable books, this is your book.

Have you read this book? What did you think about it? How do you feel about romantic novels or books that you can predict from the very beginning? Do you ever read on your phone? Are you for ebooks or for physical copies? Let me know your thoughts in the comments!