Marie Lu is one of my favorite authors. She’s really cool to talk to and she wears some really nice shoes that I would love to have on my own feet. She also knows how to write a book and make me melt and slowly die within (no reference meant… it just happened). As soon as I finished The Rose Society, I knew I had to find my laptop that was hidden in my bed and write this review because so many things are rolling around in my head! Just beware to all the readers that have yet to read this book. There will be spoilers from the first book, The Young Elites and this one! 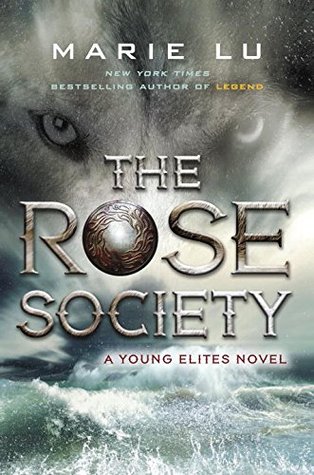 Once upon a time, a girl had a father, a prince, a society of friends. Then they betrayed her, and she destroyed them all.
Adelina Amouteru’s heart has suffered at the hands of both family and friends, turning her down the bitter path of revenge. Now known and feared as the White Wolf, she flees Kenettra with her sister to find other Young Elites in the hopes of building her own army of allies. Her goal: to strike down the Inquisition Axis, the white-cloaked soldiers who nearly killed her.
But Adelina is no heroine. Her powers, fed only by fear and hate, have started to grow beyond her control. She does not trust her newfound Elite friends. Teren Santoro, leader of the Inquisition, wants her dead. And her former friends, Raffaele and the Dagger Society, want to stop her thirst for vengeance. Adelina struggles to cling to the good within her. But how can someone be good when her very existence depends on darkness?
Bestselling author Marie Lu delivers another heart-pounding adventure in this exhilarating sequel to The Young Elites.

About the Author: Marie Lu is the art director at Online Alchemy, a video game company, and also owns the children’s brand Fuzz Academy. She was first inspired to write Legend while watching Les Miserables one afternoon, and wondered how the relationship between a famous criminal vs. a prodigious detective might translate into a more modern story. She graduated from the University of Southern California in 2006 and lives in Los Angeles, California.

Adelina is back and she wants the throne. She will not stop for anyone and no one is going to get in her way of getting the throne. Adelina has the help of her sister, Violetta who is able to withhold people’s powers, but she meets some friends along the way named Magiano (he’s able to mimic the powers of others) and Sergio (he’s able to control the rain. Since the Dagger Society is no longer her allies, she has to find who is and she might even learn the dark truth about herself.

When I was reading The Young Elites, I was all for the chance of Enzo coming back to life and the relationship between him and Adelina. After meeting Magiano, every changed. From the very first time that we are introduced to him, I somehow knew I was going to fall in love with him, along with Adelina because who doesn’t fall in love with her? Magiano has to be one of the most caring people from all the books that I have ever read about. He might not take the place of Rowan (Throne of Glass) or Rhysand (A Court of Thorns and Roses) but he is up there. Was it just me that read his parts with a British accent? I don’t know why but I always heard him talk in my head like he was British. From the time that Adelina and Magiano shared their first kiss, I knew that they were destined to be together and there was no way that Enzo was going to get in their way.

That’s right. The powerful and noble Enzo is back. I want to stab him in the heart just like Teren did to his sister. Enzo was different like Maeve warned everyone but now he wants to kill the one thing that he loved the most in the first book? Enzo was so sweet and lovable in the first book but after coming back from the Underworld, he was evil. The worst part was the fact that Adelina and him were sort of together while Adelina and Magiano were together… Do I smell a love triangle? Yep. Here’s the thing I hated about Enzo and Adelina in this book. Enzo thought that he could just leap back into society and have his life the way it used to be, which included Adelina. Adelina never seemed to stop him, and the look that Magiano would get on his face when it happened pained me so much because I SHIP MAGIANO AND ADELINA WAY TOO MUCH. Have you caught onto that yet?

The relationship between Teren and Gulianna was just creepy and obsessive. Teren was obsessed over that women and Gulianna wanted basically nothing but attention from him. She goes and kicks him out of the palace because he was staving the malfettos they had in this camp and he didn’t do nothing about it. When Adelina goes and transforms into the Queen and Teren begins talking about some of the stupidest things I have ever heard, OBSESSIVE came to mind because that is what he was. Everything he did was for her, and he wanted nothing less than her. It was almost like the relationship between Ezra and Aria in Season 5 of Pretty Little Liars and we all know how much hate that relationship. At least the Queen is dead and it now has Adelina in it’s spot.

I never would have seen Maeve and Lucent together but when I read that, I couldn’t help but think about how cute these two would be together. I’m not big fans of these two by themselves because of the stuff that they do but together, they are a power couple. Their loyalty to each other is great, well was great before the fact that Maeve never told Lucent that she didn’t kill her brother and that Maeve was able to bring him back from the dead. But the kiss that they shared after Adelina came and took Enzo was magical. Not as good as the kiss between Magiano and Adelina but oh well.

Raffaele is one of the characters that I still don’t know how I feel about him. His story at the beginning of the book is so depressing because he is so weak and helpless but by the end of the story I wanted him dead along with Enzo. Raffaele turned his back on so many people but yet he is loved? He was at the palace but we really don’t read much about his time there but the time Teren held him in the hallway and the time he was making an ally with the Queen. I feel bad for him when it came down to Adelina taking over his body but at the same time, I was totally okay with it.

Adelina had this darkness inside of her and I loved it. In the first book, you sort of see this darkness come out of her at the end of it when she goes and kills Dante but this book was over the moon. I’ve never been in love with a character with this much darkness within them. I feel like the book would not be the same if it didn’t have this darkness. These illusions where always fun to read about and I was always on the edge of my seat when it came to reading these scenes. I loved trying to figure out which ones are real and which ones aren’t. The part about her father appearing is a little creepy but their father was a little creepy before he died, well, let’s be honest, got murdered by his daughter Adelina. She has all these thoughts circling around in her mind telling her to do this or that and it drives her insane. I don’t think the book would be as fun to read if it didn’t have Adelina going crazy in it.

The writing style of this book was perfection. There were parts that I didn’t enjoy but that was just my personal opinion with the book. The book kept me waiting for what happens next and I remember many nights where I was up late because I wanted to read this book. The characters were developed nicely and the whole thing was perfect. I was totally fine with the characters who actually got a perspective through the book but I wish that I could have read Enzo’s when he was being reborn. I wish that I could know everything that he was feeling when he was coming back, rather than just Maeve’s glowing hands and what Adelina was seeing. I also really wished that Magiano got a part in the book basically because he became my new obsession. Whoops. Hands down, one of the best sequels I have read.

Overall, I would have to give this book a 4.5 out of 5 stars. The book was amazingly written, as you just read, and I loved reading every second of it but there were things I just didn’t like about it, like the fact that Adelina and Violetta almost got killed a million and ten times but some how never get hurt. If you have read the first book in the series you should totally go and check out this one because you won’t regret it!