A few months ago, I read the sequel to a book that I read when I was in like 8th grade. Well, I finished the sequel to a book that I read about seven years ago. Yep. Here’s what I found interesting – I could remember most of the stuff that happens in the first book, even with the huge time jump. Maybe it’s because it was one of my favorite books when I was younger but I could remember it! But, I am back with another book review and I hope you enjoy this. Just beware of some of the spoilers that might come out for not only this book, but Wendy Mass’ other books. 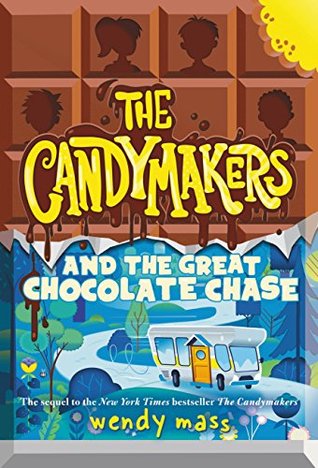 Title: The Candymakers and the Great Chocolate Chase

The highly-anticipated sequel to the New York Times bestselling novel The Candymakers by beloved author Wendy Mass
It has been a few months since the nationwide New Candy Contest, and Logan, Miles, Philip, and Daisy have returned to their regular lives. But when the winning candy bar comes down the conveyor belt at the Life is Sweet candy factory, Logan realizes something’s very wrong….
When the Candymaker announces that they will be going on tour to introduce the new candy bar, the four friends see this as an opportunity to make things right. But with a fifty-year-old secret revealed and stakes higher for each of them than they ever imagined, they will have to trust one another–and themselves–in order to face what lies ahead.
In this action-packed sequel to the bestselling novel The Candymakers, prepare to embark on a journey full of hidden treasures, secret worlds, and candy.
LOTS and LOTS of candy.

About the Author: Wendy Mass is the New York Times bestselling author of eighteen novels for young people (which have been translated into 20 languages and nominated for 76 state book awards), including A Mango-Shaped Space (which was awarded the Schneider Family Book Award by the American Library Association), Leap Day, the Twice Upon a Time fairy tale series, Every Soul a Star, 11 Birthdays, Heaven Looks a Lot Like the Mall, Jeremy Fink and the Meaning of Life, and Finally, The Candymakers , and 13 Gifts. Her latest books are The Last Present, Pi in the Sky, and a new early reader series called Space Taxi. Wendy wrote the storyline for an episode of the television show Monk, entitled “Mr. Monk Goes to the Theatre,” which aired during the show’s second season. She tells people her hobbies are hiking and photography, but really they’re collecting candy bar wrappers and searching for buried treasure with her metal detector. She lives with her family in New Jersey.

It feels a little weird having to write this review about a book that was written for young kids. The book is written towards middle school, young readers and here I am. I’m in high school and I have read way too many Stephen King novels. I’m not saying that the book is bad and all but I just have to give in a 3 out of 5 stars.

I love the way the book is written. Getting to show kids how differnet writing styles work was awesome and I loved being able to go through these character’s mind. I do wish that there was more of the book written in first person but what can I do about that? Plus, the book would be like 1000 pages longer and I would have gotten way too bored with reading the book.

Getting to read a book where the author includes her other book series and her other characters is one of my favorite things. I was reading the one part where Logan and his friends make it to one of the competitions the one candy store was having and they happen to run into Jeremy Fink and his friend Lizzie. Then there was the location of Willow Falls, which is where my favorite series of hers (11 Birthdays) takes place. The little aspects of her other series was cute and I always loved trying to get connection between the series.

I forgot about how much I love Phillip while I was reading this book. Phillip lives in this house where winning is everything. He was the person who created the winning chocolate in the last book and he really broke out of his shell when he me this friends. You have no idea how much I related to him. I’m a person that keeps to myself unless I am with my friends. And I haven’t been good with friends, like Phillip. I didn’t meet my true friends until this year and I have been shaped into this new person. I know that my family can tell my difference but I just don’t know about you. These friends are amazing and I have no clue what I would do without them, just like Phillip.

I love a book with a good mystery and this book have several. Daisy kept insisting that AJ was her brother, even though he knew that he wasn’t related to her. Daisy finding her true brother who is a mystery. Phillip finding his grandparents that he never knew about. Logan finding out about what was in that chocolate that Henry gave him when they were competing. Miles was a mystery just in himself, with all of his backwards talking and geocatching.

The concept of this book series is like nothing I have read before. And I have read several children’s books in my lifetime. This group of friends win this candy competition and when they taste the first batch of the candy, they know that there is something wrong with it. Logan and his friends has to figure out what is wrong with this chocolate before the whole world goes and tries it for the first time. But when Logan’s best friend Miles finds a box of Life is Sweet‘s owner, Henry, all their ideas about him are changed. Logan and his friends not only has to figure out what was wrong with the chocolate but what on Earth is this little blue ball that smells like chocolate?

If you are looking for a cute book to get your 6-10 year old to read, this is your book. This book has a higher vocabulary that will keep your kid learning and aspects that will keep them interesting. I just had to give this book a try because I read the first book and I have always wanted to know what happens next in the series. I sort of hope that there is a third book in the series though. But, this book will open kid’s eyes to another side of thing, including the fact that candy doesn’t magically appear on the shelves.

Overall, I have to give this book a 3 out of 5. I feel like if I was a little younger, I would have enjoyed the book more. The book wasn’t bad at all and I really did enjoy reading the book but it just wasn’t my type of book. It was fun to step back and read something that didn’t make me think as much and read something that was funny. I did enjoy how much I was able to connect with the book (especially with the one putting honey on their pimples because I have been trying to get rid of one naturally for the past two days). If you read the first book in the series, reading the second one will not kill you. You might end up loving it more than the first book, just like me!

Have you read this book? Have you read anything by Wendy Mass? How do you get rid of pimples? What was the last children’s book/middle school age book you read? Let me know your thoughts in the comments!