Buddy Reading was something that I have been wanting to try for a while but I just never done it before. Back at the beginning of March, Tatiana @ littlebookfool and I started to talk about Lily Collins’ book and she suggested that we read the book together. I finally got the book the other day and we spent the next day reading the book. I thought that the time difference would be a big problem when it came to us reading but somehow we might have spent a total of 5 hours reading the book – from start to end. So, another book is read, something new is checked of my ‘Want to Try List’ and I’m bringing you another book review! Just beware of some of the spoilers that might come out through the review! 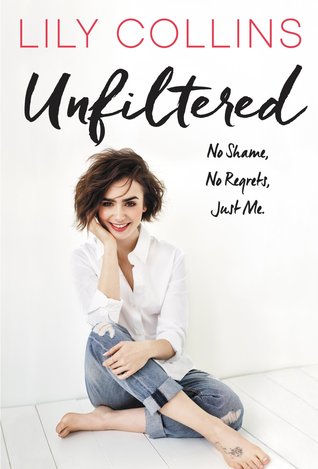 Title: Unfiltered: No Shame, No Regrets, Just Me

In this groundbreaking debut essay collection, featuring never-before-seen photos, actress Lily Collins―star of Mortal Instruments and Rules Don’t Apply―is opening a poignant, honest conversation about the things young women struggle with: body image, self-confidence, relationships, family, dating and so much more.
For the first time ever, Lily shares her life and her own deepest secrets, proving that every single one of us experiences pain and heartbreak. We all understand what it’s like to live in the light and in the dark. For Lily, it’s about making it through to the other side, where you love what you see in the mirror and where you embrace yourself just as you are. She’s learned that all it takes is one person standing up and saying something for everyone else to realize they’re not alone.
By turns hilarious and heartbreaking, Lily’s honest voice will inspire you to be who you are and say what you feel. It’s time to claim your voice! It’s time to live your life unfiltered.

About the Author: Lily Jane Collins is a British-American actress and model. The daughter of English singer Phil Collins and an American mother, Jill Tavelman, she was born in Surrey and moved to Los Angeles as a child. Her first screen role was at the age of two in the BBC series Growing Pains. She went on to study broadcast journalism at the University of Southern California and as a teenager, wrote for Seventeen magazine, Teen Vogue, and The Los Angeles Times. She was named International Model of the Year by Spain’s Glamour magazine after being selected by Chanel to wear one of their gowns at the Hotel de Crillon in 2007. In 2008, she was named Newest Red Carpet Correspondent and One to Watch in 2008.

It’s only March but I found my current favorite book of 2017. This book was perfection. If there is a more perfect book out there, I just must not know about this book yet! This book was not only inspirational, but it felt like it wasn’t a book. Don’t ask me what it was if it wasn’t a book but it was not real.

“Different” shouldn’t be considered confusing, negative, or something that divides us. It should be a quality we applaud and admire within ourselves and others.

I have only known Lily Collins for her famous dad and of her movies The Mortal Instruments: City of Bones; Love, Rosie; and The Blind Side. I didn’t know that much about her personal life or what all she did before she got famous. Lily Collins is the total opposite of what I thought that she was. When she went through her eating disorders and how she hated her relationship with food, I couldn’t help but be blown away and it makes me feel so lucky to be the person I am. Every girl out there can relate to not feeling like they are ‘perfect’ or they just want to cut off something that they don’t like. There are days that I just don’t want to take off my jacket at school because I don’t want to look fat or I don’t want to leave the house because my hair doesn’t look right. After reading this book, I feel like I won’t be as worried about how I look because I know that it isn’t what I look like that determines what my life is like. It is determined by how I live my life. It’s because of my brain, not my face.

Perfection is an unattainable goal, a concept that took me a while to figure out, having harmed myself trying to teach it at a young age.

While we were reading the book, Tatiana and I kept talking about how everyone women should go and reading this book because it will seriously teach some lesson about how they don’t need to be perfection and there is no such thing as perfection. There is always some demons that someone is battling. They could be the most beautiful girl or guy in the world and they might suffer from having a mental breakdown. They might be the ugliest person but they might be the smartest person you know. Lily Collins talked about in her book about how she dated these men that changed her and always ‘ghosted’ her. I know those aspects of the book is not supposed to be funny but I found them a little funny. Lily thought that she had to change her eyebrows because she didn’t like them when she was about 12. After a terrible eyebrow plucking, she learned that they were perfect the way they were. I was telling Tatiana about how when I was younger, I didn’t like my eyebrows either and I might have shaved half of them off…. I learned that my eyebrows are fine the way they are. I still occasionally pluck some of the random hair but I never do more than 5 at a time.

Even though I just talked about there is no such thing as perfection, this book is an acceptation. This book teaches the reader that if they put their mind to it, they can do it. You should never undervalue yourself because YOU ARE IMPORTANT. There was so many times that Tatiana and I were out of words to say because this book was perfect.

But I know now that there is a greater happiness to be attained in this world: the happiness of enjoying myself to the fullest during the one life I have and accepting myself for who I am while I’m living.

Lily has one of the best relationships with her mom that I have ever heard about. So when I read about how she kept her eating disorder from her mom, I wanted to sit there and yell at her mom, “YOUR DAUGHTER IS STRUGGLING RIGHT NOW!” But I love that her mom used to take her around the world to visit all the places that she was learning about. I loved the fact that her mom stuck by her side through all the boys that tore her down and through her problems with deciding to leave college her sophomore year. Lily wants the reader to know that no matter what, as long as you are happy with yourself, happiness will come to you.

I would like to thank Lily Collins for writing this book because this book was so inspirational and will always stay in the back of my mind. Everything in this book seemed so real and I felt like I was sitting right in front of Lily and she was telling me her life story. I love her little motivational quotes that came before every new chapter because they always had such a deep meaning and it made me want to melt. I really want to meet Lily Collins now, give her a big hug and thank her for writing this book.

I love the photos that were within the book but I wish that they were in color. I was telling Tatiana about this and she had to go and remind me about how Black & White Photos are her favorite. I loved seeing her in her ‘Fashion Police’ outfit along with pictures of her as a child and as an adult. I loved seeing pictures of her with random things (like that pickle on a stick… Who thinks of that?) I loved how the pictures flowed with the book and they all had a certain spot of the page. I’ve read books like this and they have the pictures either in the middle of the book or just randomly through the whole book. You could see the love and time that Lily put into the book.

This has to be the realist book I have read in all time. Like the title says, Lily is literally UNFILTERED and it made the book seem 100% better than what it was. Lily talked about her relationship to food and her dad, which I was able to connect with a little. My dad was in the military so there was a time where it was just my mom. I wondered when he was coming home because I was to young to understand all the risk he was taking. I felt like he left us on purpose, even though we would email back and forth about once a month. Now, my relationship with him is a lot better (since he is the source for a lot of my books). I loved how she talked about how she was one of the crazy people who would be there the day that the next Harry Potter book came out because I bet she never expected to have people waiting for her book. I loved the letters that she put within the book because they told so much in just a few pages. Lily spent about a chapter on learning to cook and the whole chapter made me want food. She talked about how she was determined to learn to cook because she was twenty-something and never learned how to cook. I felt like I was on a personal level with her because I love to cook. I love to learn how to do new things in the kitchen and walking around the cooking supplies wondering if I might need a strawberry cutter. Yes, that is a real thing.

Overall, I would have to give this book a 5 out of 5 stars. If Lily Collins wasn’t an actress, she would be known in this world. She would be known for doing something inspirational in this world. Lily Collins would be the best motivation speaker and the best speech writer. She knows when she needs to go deeper into detail and she knows the best places to stop the story. Lily knows how to pull a reader in with words and how to get people into tears. She knows how to move a person and not want to get up from one place for hours. Like I said earlier and I bet I speak for Tatiana as well but every women out there needs to go and get a copy of this book because this will show women that they don’t need to change. We are special and nobody can change us. If you aren’t treated like you would like to, don’t be afraid to move. Lily was able to. Don’t be afraid to voice your opinion or your concern because Lily did.

3 thoughts on “Unfiltered: No Shame, No Regret, Just Me | Book Review”