I don’t know if you have realize it yet or not but I really like TV Shows. Like a lot. I’m one of those people that will find a show that they really like and be obsessed with it for a few weeks. But, there are some shows that I can watch over and over again and not get tired with them. Like any show, there are season breaks or season finales so the watcher has to go and wait for the next episode. Here are 5 TV Shows that I can’t wait to start again! Now, if you are not caught up on the recent episodes of the show, you can be at risk of being spoiled! I started watching Quantico not that long ago and I freaking love this show. This show follows this women named Alex Parrish who is training to be in the FBI and learn more about her father, who was a FBI agent. Nine months later, there is a terrorist out there, trying to blame her for the attacks and they are pretty convincing. Through the whole attack, Alex has to go back and meet up with the friends that she met at Quantico, including her exboyfriend/exstalker Ryan Booth, who is a FBI Agent. Quantico was adapted by ABC Studios.

I just finished the first 13 episodes in Season 2 the other day and I seriously need the other episodes in my hands. Thank god that Ryan and Alex ARE back together because I don’t think I would be okay if they weren’t together. Watching the show, finding out about the engagement between them, the AIC, the CIA, and Ryan being a terrorist, I needed Ryan and Alex to be together. Now President Haas need Alex and her friends to stop any other form of terrorist in the United States. AND THEY HAVE TO REPORT BACK TO CALEB HAAS WHO HAS NOT BEEN IN THE SHOW SINCE SEASON 1!!! I am going to loose it people. I need March 20th to come soon because I really need to know what happens. At least it isn’t that far of a wait like some of these shows. 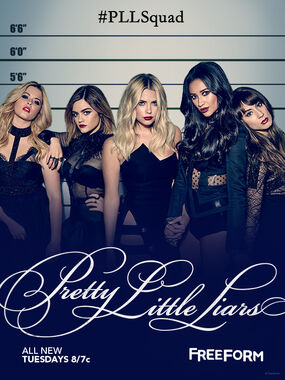 Like Quantico, you know that I have been watching this a lot. I don’t know if I mentioned it or not but I have actually watched every episode twice this year… My sister wanted to watch the show and I knew that if I didn’t watch it with her, she would be really confused on what all is going on. So I watched all of the episodes twice. Pretty Little Liars follows Spencer Hastings, Aria Montgomery, Hanna Marin, and Emily Fields one year after their friend Alison Dilaurentis. After drifting apart for some time, the girls are reunited when they all four begin to get text messages from a mysterious “A”. They all believe that it could be Alison trying to reach them and that she is not dead, but that is short lived. Who is the person behind the text and who knows what “A” might make them do. The show was adapted from Sara Shepard’s Pretty Little Liars for the channel Freeform.

It was not okay how they ended the last episode in 7a. They could not end us with Mary Drake telling Spencer that Mary Drake is her mother and Jenna ending up being in the same truck as A.D. And we can’t forget that Toby was in the car accident with Yvonne. Firstly that is fate to me that Spencer and Toby need to get together. Then Hanna and Caleb are now getting it on with each other, along with Emily and Alison. Alison is pregnant with Elliott’s baby WHICH IS NOT OKAY WITH ME. I need to know who this A.D. is because I am going to loose it by the time it starts. I realize that this line is going to be said way too much. Oh well. I need to know who took the game from Charlotte and why A.D. is after these girls. I also really want to know why I have seen Spencer, Ezra AND Wren in the same room. Well I guess Ezra makes it back to the states to his fiance Aria (even though it makes me want to gag) with or without whatever her name was. Seriously, I don’t remember her name. Was it Nicole or something? I just don’t like her but what ever to not have EZRA AND ARIA TOGETHER BECAUSE THAT IS JUST DISGUSTING!

The latest I have heard for this show was July but I keep hearing that it was in different months. I have been wanting this show to start back since season 6’s season finale. Game of Thrones follows the story between nine, wealthy families in the Westeros who has a bunch of junk they have to go through. There are some brother and sister relationships, dragons, messed up family reunions, and evil kings that eventually die even though they are only like 15. It was adapted by the novel Game of Thrones by: George R.R. Martin and premiers on HBO.

I really hope that the dragons are still part of the show in Season 7. I love those little, well big dragons. I also really hope that Tyron has done something with his beard because he almost looks like a lion in the past two seasons. I’m pretty sure that I read somewhere were Season 7 is going to be the final season of the show and I am not okay with that. I read the books and I have watched the show. I AM NOT READY TO GIVE UP THIS SHOW. This show brings me so much joy with all the events that happen with it, just as long as it is after King Joffery’s death. I am so happy they did not end up killing Jon Snow in the last season because it would not be the same. But if he was dead, Sansa Stark might be dead and I lowkey want her dead. I don’t want to deal Arya loosing almost everything that she has had in her life though. I need to know how this show is going to end because they have left me hanging on to that old lady who can shape shift to that red headed women and the boat that Daenerys and her fellow men got onto at the end of the episodes. At least the dragons will be involved in the first episode! Plus, the posters that were leaked or released for season 7 are so beautiful and I am in love with them!

I started to watch this show when the show was to about episode 6. My dad had heard from people he worked with that it was supposed better than or about the same as Game of Thrones so we both decided to give the show a try. Once I gave this show a try, I became in love with it. Westworld follows the town of people who have been created by people to relive the same day over and over again unless the people that come to the world change it. Over time, Dolores has seen how people have changed because she is one of the oldest in the batch, one of the originals. Dolores sees a lot and does the same thing over and over. That’s until she sees a picture of of a women in New York, and she wants to know more. The show was adapted from the 1973 film entitled Westworld and airs on HBO.

I need to know more in the story of Dolores and Teddy. Teddy would do anything to protect Dolores, even though they are created by Robert Ford. Teddy risked his life so many times for her and it is breathtaking. Also, I am a really big James Marsden fan so who could blame me? AFTER LEARNING THAT WILLIAM WAS THE MAN IN BLACK, I COULD NOT BELIEVE ANYTHING ELSE I SAW IN THAT SHOW. I was growing so attached to William while he was younger but I sort of sensed something interesting was behind him. Now that finale five minutes of season 1, that is one other story. Dolores is now Wyatt and she is coming after all these people. She even goes on ‘stage’ and kills that one guy (I’m terrible at names today for some reason!) and it makes me second guess everything I have ever thought about Dolores/Wyatt. We have that maze that Dolores found in one of the episodes and we can’t forget those weird situations with the fly. For some reason anytime a fly comes over to one of the androids, they sort of change. I can’t be the only one that is wondering this. This was even happening in the first few episodes so it has to mean something, right? Or am I overthinking this whole thing.

I know – this show just literally ended not even a week ago. I just really want to let go over the thoughts that are clogging up my brain cells. The show follows Clarrisa Fray, who thought she lived a normal life. Clary one day finds out that she has a gift – more like a power or superhero power. Clary finds out that she is a Shadowhunter. Shadowhunters go out and save the planet from all the evil things out in the world including faeries, werewolves, vampires, etc. Clary is taken into this world where she meets all kinds of people including Magnus Bane, Isabelle and Alec Lightwood, and we can’t forget Jace Wayland. Take a trip through battle the evil, learning the truth about yourself, and having to learn to defend yourself. Shadowhunters is adapted from Cassandra Clare’s bestselling novels The Mortal Instruments and airs on Freeform.

JACE IS HOLDING ONTO THE FACT THAT HIM AND CLARY AREN’T RELATED BECAUSE HE DOESN’T WANT TO RUIN SIMON AND CLARY AND IT IS KILLING ME. I have known that they weren’t related the whole time since I read the books but I was waiting until the show to release that information. I don’t associate the book and show together because they just don’t follow the same storyline. Same information, different storyline. The past few episodes that have been aired, you could see how much Jace has to fight back the kiss that he wants to lay upon Clary’s lips. Simon and Clary should have remained friends because the whole thing is a little weird to watch because it is all different. NOW THEY HAVE CASTED GAME OF THRONES STAR WILL TUDOR AS SEBASTIAN AND I CAN’T WAIT TO SEE HIM AGAIN! I’m excited to see how ‘evil’ they can make Sebastian be on the show and I need to know that Jace and Clary are still getting back together. I have also seen where the actress who plays Jocelyn Fairchild has been back on set and I hope that it is because she comes back to life. In the books she does but who knows with the show. Even though I don’t care for the character, nor the actor that plays her, I still want her back on the show.

What shows are you excited to be aired again? Have you watched any of these shows on my list? What were your thoughts on the show? What is one show you are currently addicted to right now? Let me know your thoughts in the comments!