I’m writing this at about 1 am because I like to review things as soon as I finished watching it or reading it. I don’t know why but I always get more interesting thoughts out of my head. But, I just finished watching Season 1 of Quantico and I can’t believe what I just watched. If it was up to me, I would be starting season 2 right now but I thought I would share a piece of my mind! Just be aware – there might be classified spoilers ahead of you. 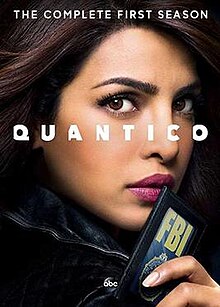 A drama about FBI trainees at the FBI Academy in Quantico, Va., one of whom is a sleeper agent who will engineer a major terror attack on the U.S.

Let me give a round of applause to all the people that had something to do with this show. I was blown away with this show. I never thought that I would be a person that would be into shows with cops/FBI/secret service but this show made me change my mind. I freaking love this show. Now, I wasn’t always drawn into the show but after two or three episodes, I was addicted to this show and it raised a lot of questions in my head.

Where can I find myself a Ryan? I want myself a Ryan. This show would not be the same if it didn’t have him in it. His love or Alex was amazing and sort of adorable. If he had to, he would literally take a bullet for her, and in reality, he did it. Never once did I think that Ryan could be the person behind the attacks because you cold see the love in his eyes when he would talk to Alex, even though he was with Natalie. Yes, the first time that we meet Ryan, he goes straight out and lies to us by saying he was going to some country to visit his family even though he was going to the FBI academy. Also, he goes and lies to basically everyone about him actually a Special Agent and not a trainee. But I love how Alex and Ryan having their thing about how they are each others biggest distraction and how Ryan does things because he loves her. Even Ryan’s ex-wife could see the love in Ryan’s eyes for Alex and she doesn’t even like Ryan OR Alex. That has something to say, doesn’t it.

I’m not a fan of time jumps as you all know but the time jumps in this show, I sort of enjoy. The show begins with Alex laying in the mess that has been made because of a bomb that she was being set up of doing. It goes back nine months to the time that Alex was planning on going to the academy and having sex in the car with Ryan at the airport. During each of the episodes, you are able to see what is going on with the progress of Alex being blamed for the explosions and how Alex and her friends are doing in the academy. But then, there was one episode that I hate the time jumps and it was the final episode. You have the nine month time jump like you have in every episode, then a two week time jump, and then a two month time jump. Other than that, I really enjoyed the time jumps.

Can I talk about something really off topic but I noticed it when I was watching the show? Let’s talk about this kid Caleb Haas. I think it is a little weird that every Caleb I have ever seen as a main character in a show or know in real life is into electronics but anyway. During several of the episodes, you find him shirtless, which I am totally FINE with. There was one episode where his chest is nicely shaved really nice but then in the next episode, it is a lot more hairy than the previous episode. I know. Why am I looking at that instead of everything else that is happening in the show? I have no clue. I just really like seeing guys shirtless and who blames me?

While I was watching Pretty Little Liars I thought that everyone was “A”. While watching Quantico, I thought that everyone could have been the terrorist – well, all but Ryan and Alex (since she was the one that was trying to find out who was). For a while, I thought that it was Simon because he was the one who knew the bomb maker well and lied to Alex about what he said. Simon was the person that had made the original plans for the bomb in the first place. Everything was pointing in his favor until I found out that Natalie was willing to turn Ryan in, even though she was sleeping with him. Natalie sort of grew on me when she was willing to let Ryan and Alex go by when he was shot when they were meeting up with the twins. The fact that Natalie is dead kills me inside because I really wanted to see where she could lead us. Hannah was a high person on the list because of how much she really doesn’t like Alex for hurting Ryan. When Hannah started to see that Alex wasn’t crazy and was willing to risk her job for her, I knew it wasn’t her. Shelby of course ran over my mind a few times but Shelby knew a little much and she just wanted to protect herself since she was sleeping with Caleb’s dad. But the final five episode, I had my guesses down to Liam and Caleb, which one of them was actually right. In episode 21, I thought that Miranda might have been that terrorist because she lied to Ryan and all but that ended up being wrong since she was able to figure out that it was Liam before anyone else. Caleb was off the grid for half of the season and the car was rented out into his name. Caleb was involved with the cult in his past life so I thought that he might be back at it. Until I saw that Caleb had turned to drugs, I went ahead and crossed him off my list. Which left poor little Liam who just so happens to be dead. Thank god. Looking at it now, Liam left all the signs point to him and everything makes so much more sense. All the lies that he had people tell and all the terrible things that he had done personally, no wonder why he did the things that he did.

The plot of a show is what determines if a show is going to be good. Also being able to make connections to it as well is a big factor. One of the biggest connections I made? Being a Mormon and one of the characters on the show in the first episode was a Mormon. Yep. I sort of lost it because never in a million years would I have been able to get that as correct as they did in this show. He did end up killing himself in the first episode, which I have never done, but it was interesting to know that there was great DIVERSITY on this show. The plot with Alex being blamed for the bombs and all was pretty genius and the way that they laid everything out was great. I loved being able to go through the mental process of not only the academy but the manhunt because I felt like I was part of the FBI. I felt like I was in the room, learning how to identify the suspect and organizing files (which shockingly happened a lot). The show made me feel like I was right there, as a trainee for the FBI.

I don’t think that I could pick a better cast for this show. I don’t even think that I would change one person on the cast for this show. I felt like this cast had such a great connection and they all understood each other and you could tell based on the actions they had between each other. The cast made it really difficult for me to even guess that there was twins in the show and I am typically able to pick that up easily. I thought it was weird the side of the headpiece would change but I thought it wouldn’t matter. But, there was twins and the fact one person played both of them was outstanding. This whole entire cast deserves an award for their work.

Overall, I would have to give this a 4.5 out of 5 stars. Yes, I loved this show to pieces but there was several things that I really didn’t care for and a few things that was a little predictable. I don’t know how true this is to the real Quantico but I would love to know! If you were ever wondering about joining the FBI or have a fascination in mysteries, this is the show for you! I would suggest that kids younger than 13 not watch this show because they might not be able to handle some of the stuff that happens in the show, and there are use of guns through the whole show.

Have you watched this show? What were your thoughts about it? Who is your favorite character from the show? Have you spoiled yourself on the show (because I did sadly)? Let me know your thoughts in the comments!