These months are just flying by! It might be because February only has 28 days this year but they are flying right by. That could be both a good thing and a bad thing. March is marching right on in and bringing these amazing book releases along with it. 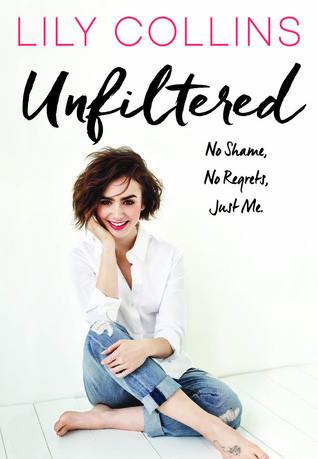 Title: Unfiltered: No Shame, No Regrets, Just Me

In this groundbreaking debut essay collection, featuring never-before-seen photos, actress Lily Collins―star of Mortal Instruments and Rules Don’t Apply―is opening a poignant, honest conversation about the things young women struggle with: body image, self-confidence, relationships, family, dating and so much more.
For the first time ever, Lily shares her life and her own deepest secrets, proving that every single one of us experiences pain and heartbreak. We all understand what it’s like to live in the light and in the dark. For Lily, it’s about making it through to the other side, where you love what you see in the mirror and where you embrace yourself just as you are. She’s learned that all it takes is one person standing up and saying something for everyone else to realize they’re not alone.
By turns hilarious and heartbreaking, Lily’s honest voice will inspire you to be who you are and say what you feel. It’s time to claim your voice! It’s time to live your life unfiltered.

About the Author: Lily Jane Collins is a British-American actress and model. The daughter of English singer Phil Collins and an American mother, Jill Tavelman, she was born in Surrey and moved to Los Angeles as a child. Her first screen role was at the age of two in the BBC series Growing Pains. She went on to study broadcast journalism at the University of Southern California and as a teenager, wrote for Seventeen magazine, Teen Vogue, and The Los Angeles Times. She was named International Model of the Year by Spain’s Glamour magazine after being selected by Chanel to wear one of their gowns at the Hotel de Crillon in 2007. In 2008, she was named Newest Red Carpet Correspondent and One to Watch in 2008.

Why I Want to Read This Book: I really enjoy watching Lily Collins in a lot of films. I feel like Lily Collins’ is one of those people who are very down to earth and she is not afraid of what is coming out of her mouth. I feel like she has a very special story that deserves to be told. Plus, every so often I like to read memoirs every so often and this one calls my name. 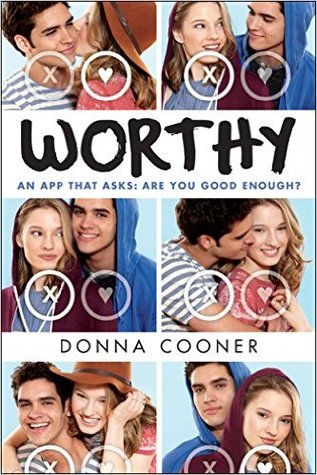 Download the app. Be the judge.
Everyone at Linden’s high school is obsessed with Worthy. It’s this new app that posts pictures of couples, and asks: Is the girl worthy of the guy?
Suddenly, relationships implode as the votes climb and the comments get real ugly real fast.
At first, Linden is focused on other things. Like cute Alex Rivera. Prom committee. Her writing. But soon she’s intrigued by Worthy. Who’s posting the pictures? Who’s voting? And what will happen when the spotlight turns… on Linden?

About the Author: Donna Cooner was born and raised in Texas. She is a three time graduate of Texas A&M University. A former teacher and school administrator, she now teaches teachers and principals at Colorado State University where she is the director of the School of Teacher Education and Principal Preparation. She lives in Fort Collins, Colorado, with her two labs and a cat named Stu. She’s a big fan of chocolate and laughing (not necessarily in that order).
Donna is the author of two novels for young adults, Skinny and Can’t Look Away. She’s also the author of over twenty picture books and was a founding member of the Brazos Valley Society of Children’s Bookwriters and Illustrators. She has also written children’s television shows for PBS and textbooks for future teachers.

Why I Want to Read This Book: I read Donna Cooner’s Can’t Look Away a few years ago and I really had a great time reading the book. I have been wanting to get my hands on another one of her books and this seems like that book. I love the fact that she includes real problems that teenagers actually deal with and it seems to have a great idea behind the book so I am excited to read what this book is like. 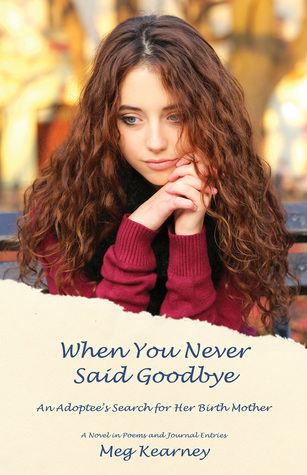 Title: When You Never Said Goodbye: An Adoptee’s Search for Her Birth Mother

A student at NYU in Greenwich Village, Liz McLane is pursuing her dream of becoming a poet and, at the same time, determined to find her birth mother, no matter what the results may be. Through her journals, Liz records her struggle to navigate adoption bureaucracy and laws.  In spare and poignant poems, she confides her fears and her prayers.  Could her birth mother be the unknown guitarist in Washington Square Park, who sings a soulful song in a strangely familiar voice?  Against a backdrop of college life—classes on Alice Munro and Billy Collins and an active social life—and with the help of her sister, friends, and a private investigator, Liz summons the courage to face the truth about her mother and herself.
This is an unforgettable novel full of heart that addresses the primary questions all adoptees must answer for themselves: who was the woman who gave me life, and why did she decide to give me away?  Based on author Meg Kearney’s own experiences.

About the Author: She is the recipient of an Individual Artist’s Fellowship from the New Hampshire Council on the Arts (2010-2011), and was a fellow at the Virginia Center for the Creative Arts in three times. Recipient of 2001 Artist’s Fellowship from the New York Foundation for the Arts, Meg also received a New York Times Fellowship and the Alice M. Sellers Academy of American Poets Award in 1998; the Geraldine Griffin Moore Award in Creative Writing from The City College of New York in 1997; and the Frances B. DeNagy Poetry Award from Marist College in 1985. She is a former poetry editor of Echoes, a quarterly literary journal, and past president of the Hudson Valley Writers Association of upstate New York. A native New Yorker, Meg currently resides in New Hampshire with her husband and their three-legged black Lab, Trouper; their three-legged cat, Hopkins; and, oddly, their four-legged cat named Magpie.

Why I Want to Read This Book: I have always been a fan of these types of books. It’s sort of like a mix of a mystery with a autobiography. There is this show TLC where there are a bunch of people who where put up for adoption when they are born and they want to find their birth mom. It happens to be one of my favorite shows out there. I feel like this book is going to be just like the show and I am really interested in reading this book. 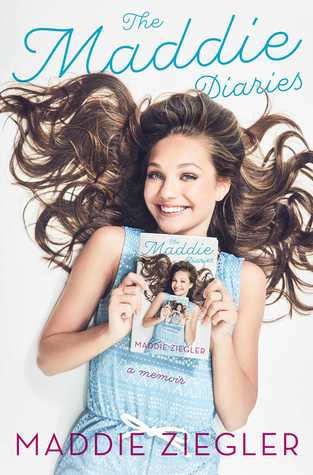 Teen dance prodigy, breakout Dance Moms star, and judge on So You Think You Can Dance: The Next Generation presents her uplifting coming-of-age memoir about following her dreams and working hard to achieve success in both the dance world and in life.
Maddie Ziegler had hoped to become a star—she just didn’t know how soon that day would come. At just eight years old, she was cast on Lifetime’s hit reality show Dance Moms and quickly won the hearts of fans everywhere with her natural talent and determination. Soon, she was catching eyes all over—including those of pop superstar Sia, who handpicked her to star in the incredibly popular music video “Chandelier.” The rest, as they say, was history.
In this inspirational memoir, Maddie explains the hard work she put into her rise to stardom and how she keeps her balance along the way—starring in music videos, going on tour, and becoming an actress in The Book of Henry with Naomi Watts and Jacob Tremblay. She also answers her fans’ burning questions with wise advice she’s learned on her journey. With honesty, charm, and humor, Maddie offers her unique perspective on making her way in the world as a young teenager, reflecting on the lessons she’s learned—and preparing for the exciting road ahead.

About the Author: Madison Nicole “Maddie” Ziegler is an American dancer, actress and model. She first became known for appearing in Lifetime’s reality show Dance Moms from 2011 until 2016. From 2014 to 2016, she gained wider fame for starring in five music videos by Sia, including “Chandelier” and “Elastic Heart”, which cumulatively have attracted more than 3 billion views on YouTube. Ziegler has guest-starred on scripted shows, danced on various TV shows and at concerts, and has been seen on magazine covers and in feature articles. She has modeled for Capezio, Ralph Lauren and Target, among other brands. Ziegler was included by Time magazine on its list of the “30 most influential teens” in each of 2015 and 2016.

Why I Want to Read This Book: I used to be a big fan of the show Dance Moms but I sort of stopped watching it. It was a round the time that Maddie Ziegler left but I didn’t leave because of that. I left because the show had way too much drama. I have always been a big fan of Maddie Ziegler while she was on the show and I have been interested in knowing a lot more about her. I am also really interested to know if it sounds like a 14 year old wrote it or if someone else wrote the book because she could have gotten a ghost writer. But, I really want to know about her experiences and read about everything that she has to say about being on Dance Moms and So You Think You Can Dance.