One good thing about having a mom that works in a middle school library – getting to read all the new middle school books first. Every so often you just want to read something fun, that you know you will get a good time out of it but you just don’t want to buy it. When my mom told me that she ordered the sequel to the book Escape From Mr. Lemoncello’s Library, I knew that I wanted to get my hands on it. In this quick, light, hilarious middle school aged book, you will get everything that you are looking for. This book was such a great read! Just beware of the spoilers that may come out in Mr. Lemoncello’s Library! 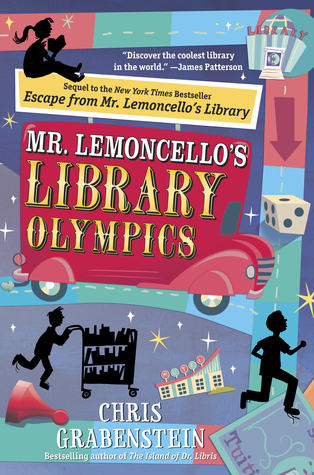 Welcome, boys and girls, readers of all ages, to the first-ever Library Olympiad! Kyle and his teammates are back, and the world-famous game maker, Luigi Lemoncello, is at it again!
This time Mr. Lemoncello has invited teams from all across America to compete in the first ever LIBRARY OLYMPICS. Will it be fun? Like the commercials say. . . HELLO? It’s a Lemoncello! But something suspicious is going on . . . books are missing from Mr. Lemoncello’s library. Is someone trying to CENSOR what the kids are reading?! In between figuring out mind-boggling challenges, the kids will have to band together to get to the bottom of this mystery.
Now it’s not just a game—can Mr. Lemoncello find the real defenders of books and champions of libraries?

About the Author: Chris Grabenstein is the author of the New York Times bestsellers The Island Of Dr. Libris and Escape From Mr. Lemoncello’s Library as well as the co-author (with James Patterson) of the #1 Bestselling series I Funny, House Of Robots, and Treasure Hunters. Winner of all sorts of awards, Chris writes fast-paced and fun page-turners for children and adults. He’s also a playwright and screenwriter not to mention a former advertising executive and improvisational comedian. Sometimes he sleeps.

I loved reading the first book in the series. I actually still remember what day of the week it was – Sunday, and how long it took me to read it – 2 hours and 13 minutes. It was also the same day where I finished Clockwork Princess by: Cassandra Clare. I have no clue why I remember this.

Because of all of this, I was really excited to relax from reading everything from school, and a lot of the books that I have on my bookshelf. There were so many things that I was still wondering after reading the first book and in this one, I got my answers!

The book begins where the first book sort of finishes off. Kyle and his friends have just won the games and they are basically famous. Of course, Charles wants to get his revenge on Kyle and his team because they got him kicked out of the other games for cheating. Charles turns to his mother for help – get Mr. Lemoncello’s library closed.

I love how the book was set up. While you are reading the book, you learn about how the contestants get these clues and puzzles. In most books, you only get a few lines to figure out the clues and you don’t get to actually visualize what the clue is. In this book, the clues are actually shown out on the page and typically, you have to read a few pages to find out the answers of the clues. I actually took the time to see if I was able to answer some of these clues and for the most part, I was able to. Some of them, nope! I actually had a lot of fun figuring the clues out while I read.

This book is such a great book to get your kids interested in reading and the history behind it. The book includes a bunch of Dewey Decimal Jokes which I loved. How many kids and adults do you know that happen to know the Dewey Decimal system? My mom does but that is only because she is a librarian and she took a college class on it. (If you understand the Dewey Decimal System, you will understand: I STILL BELIEVE IN 398.2) The book taught me a lot more than what I already knew about the system.

Unlike most books, the kids actually acted like kids their age. You might be thinking right now how they were acting their age while they are competing in the library olympics. Well, the kids never took the thing over extreme, played around like kids in middle school, and they were very fun to read. Of course there were moments that the characters acted a little older than their ages or they were a little cocky but that was only because they either won an award or they were being asked to go and rob a book from the library to make Mr. Lemoncello go mad. Kids would love reading about their adventures through the book.

Mr. Lemoncello had to be my favorite character from the whole entire series. He was absolutely hilarious and was always making book references. I am one of those crazy people who love a great book reference in the most randomist ways. I was actually shocked to find out that I was familiar with a lot of the books that he referenced I mean I know a lot of the books that are being released in the middle school age section but the fact I read a lot of them blew me away. It even made a reference to my summer reading book for English this year, The Kite Runner, which I thought was insane! All the games that he played – including the fact that he made up this great uncle twice removed that Andrew had just to play as a bad guy in the games – was the best. Mr. Lemoncello always was adding in the best things to the games that always got me excited to read more of the book.

If this was a real library and this was a real game, I would totally try to get into the games. I mean, as long as your team wins, you get a full scholarship to you dream college. That would be my dream, even though I still have like two years til I head off to college. I mean I have a lot of things I would have to remind myself but I think I would do pretty well. I would have to be Sierra from Team Kyle because I remember a lot of little things I read. During the Battle of the Books competition, I was actually guessing with them. I actually was on a Battle of the Books team from 4th grade til 6th grade and I was the strongest member up there. I knew my title and authors, along with the content of the books. I always had fun doing stuff like that. The games just sound like a lot of fun in the first place, having to see who all knows their Dewey Decimal System, trivia and book knowledge. I think it would have been fun to see how well they know their book publication dates but that might just be me.

This book was just a bunch to read and such a great book to dive into if you needed to read a fun book. Readers of all ages should give this book a try, even though it is directed for middle schoolers. As long as you know your Dewey Decimal System and how a library works, you will enjoy this book! I am really hoping that there is another book in this series!

Have you read this book? Did you know about they Dewey Decimal System? How do you feel about your local library? Do you like it? What would your dream college be? Let me know your thoughts in the comments!