Random Fact that might sound a little strange: I haven’t shaved my legs in a week because I haven’t left my house that often. I’ve been laying in bed for about a week because of exams. Yah… I really need to shave them.

Moving away from that, I have been reading along with all my Pretty Little Liars binge watching. Shocker, I know. I have had so many books on my phone that I bought for free, because they were FREE, and I finally started to read them. I really don’t know why I have waited so long to read some of these because they look pretty good. I decided that I would read Killer Cupcakes at the time and I am actually pretty happy that I read it. Just beware or these Killer Spoilers! 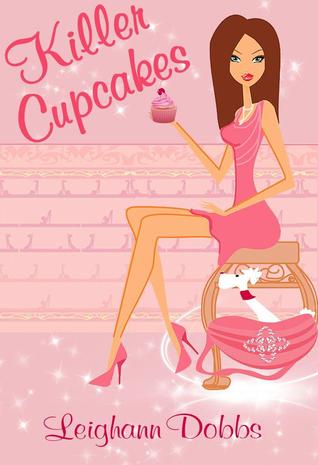 Things are going great for Lexy Baker. She’s finally opened her dream bakery, gotten rid of her cheating boyfriend and settled into her grandmothers house with her perky dog Sprinkles at her side.
But her blissful life doesn’t last long. When her ex boyfriend is found poisoned with cupcakes from her bakery, Lexy finds herself in the middle of a murder investigation headed up by her hunky neighbor detective Jack Perillo.
With the help of a gang of iPad toting, would-be detective grandmothers, Lexy decides to take it upon herself to find the real murderer in order to clear her name and get her bakery back in business.
As things heat up on the murder trail, in the kitchen and between Lexy and the hunky detective, it’s a race against time to put the real murderer behind bars and get back to baking.
Will Lexy get her man?

About the Author: USA Today bestselling author, Leighann Dobbs, discovered her passion for writing after a twenty year career as a software engineer. She lives in New Hampshire with her husband Bruce, their trusty Chihuahua mix Mojo and beautiful rescue cat, Kitty. When she’s not reading, gardening, making jewelry or selling antiques, she likes to write cozy mystery and historical romance books. Her book “Dead Wrong” won the “Best Mystery Romance” award at the 2014 Indie Romance Convention. Her book “Ghostly Paws” was the 2015 Chanticleer Mystery & Mayhem First Place category winner in the Animal Mystery category.

One of the reasons that I got this book, other than the fact that it was free was the synopsis of the book. The fact that someone’s cupcakes was the reason why someone was dead? And the fact that the owner knew the guy, I knew I would be interested. I’m glad that I gave the book a try but I really don’t know if I would try her other book series. More than likely I will read the other books in the series but I think I am going to stick with this series.

I am a fan a mysteries but at the same time I hate them. I love the thrill of trying to figure out who did it, because I always am trying to while I am read. I hate the fact that the person who did it was right under our noses the whole entire time. The killer in this book, who ended up being Kevin’s brother, literally hinted to Lexy about the whole thing but no one really questioned it. I was actually thinking that it could be Jack, even though he was a cop. Cops still can go and get arrested for doing things illegal. Jack happened to meet Lexy the night of the murder, when she happens to rip her sleep pants? And he knew her  Grandmother??? I was thinking it was him, even when Lexy was attacked going into her house. Anyone can come up behind you and hit you. Even the people you think you know well. Jack really didn’t check off of my list until the button. Anyone knows that if you break into someone’s home there are two things you should do:

It is almost like it is more common sense than anything but you need something to get the mystery wrapped up or you will be there for years. Which I probably wouldn’t mind that much.

The characters in the book seemed to talk like they were a different age than what they really were. Nana and her friends did more in this murder case than Lexy and hr friend Cassie, and they are older than them. Jack seemed to be the only one who was really acting their age. Lexy and Cassie were almost like the annoying kids you see in the store who just moved out of their parents house and are still trying to get on their feet. The conversations they had in the book were even worst. It really didn’t seem like the characters were really thought out.

I did really enjoy the plot and the whole idea of the book. Lexy’s ex-boyfriend was poisoned with her cupcakes and we needed to find out who did it. Lexy never expected to find the love of her life while she was going through the mess as well. I felt like the book could have been stretched out a little more than what it was. It took like three days to figure out who murdered Kevin, and it wasn’t even the cops. Of course it had to be Lexy. It seems like any book like this that the main female character finds out who did it. It would have been amazing if Lexy’s dog, Sprinkles would have found out who did it. The dog is Lexy’s best friend and was the one who found the button. I was thinking that maybe the dog would play a bigger role than what she did.

I am pretty sure that I will be continuing this series because I want to see what happens between Lexy and Jack. Lexy thought that Jack had a girlfriend because there was someone in his house with long, curly hair, and he called someone darling on the phone after they kissed for the first time. Finding out that it was just his partner was hilarious. I was actually beginning to believe that Jack had another girlfriend, or even a wife. I want to see what happens between Cassie and the partner John in the future as well. Maybe Lexy will become a undercover detective on the side of being a baker! 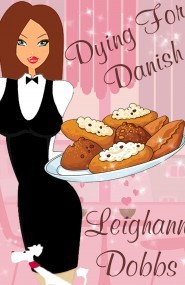 When Lexy Baker lands a high paying catering job that allows her to buy some much needed kitchen equipment, she’s excited that things are going so well … until she stumbles over the body of the bride-to-be.
Suddenly Lexy finds herself in a race against time to find the killer. Aided by four iPad toting amateur detective grandma’s, her best friend and her little dog Sprinkles, Lexy finds the suspect list growing at every turn.
To make matters worse, the investigation is headed up by her hunky neighbor Detective Jack Perillo who she had been hot and heavy with – until he mysteriously stopped calling her several weeks earlier.
Add a handsome, rich bachelor who is also a suspect and seems to have designs on Lexy to the mix, and Lexy soon finds that things are not what they seem.
Will Lexy be able to catch the killer in time, or will she end up Dying for Danish?

Have you read this book? What did you think about it? Do you enjoy reading mysteries? What is your favorite baked good? Let me know your thoughts in the comments!