I’ve been pretty lazy recently because I only have to go to school a few hours this week because of exams! Part of my time at home consist of cleaning/cooking for my mom so it is done when she gets home, watching TV and of course reading. But, Pretty Little Liars has me wrapped around their finger and wants me to sit and do nothing all day. So, season 4 is done and like normal, “A” is blackmailing me into spoiling you on this show! 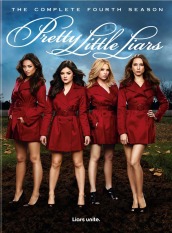 I didn’t enjoy this season as much as the other seasons. I don’t know if it is because it took me longer to watch it so it seemed stretched out or what. I did really enjoy the plot and the events that happened but it didn’t live up to the other seasons.

There were so many guest stars this season but I had to laugh to myself for one of them. I have also been watching Jane the Virgin on the side of this show. I’m team Michael so that lead me to a little obsession with Brett Dier. During the episode that sort of plays the show to Ravenswood, Brett Dier just so happened to be in the episode. Yes, he had only two or three words in the whole entire episode but he was in a very important episode, where I started to really hate Ezra.

Aria and Ezra have to be done, except, who knows after the season finale. Ezra was basically using Aria to write his book on Alison. He claims that all of his feelings for Aria are real but I had a hard time believing that. It was almost like Ezra was loosing his mind after everything that happened with Maggie and not being Malcolm’s real father, then the whole break up with Aria. I knew he was up to something but I had no clue what. During the episode where Spencer beings to think about him being “A”, they show the back of Ezra going to the apartment. They didn’t show his face until he gets into the apartment but I literally was sitting there in bed, yelling at my TV that I knew who that was. I felt so bad for Aria because she was trying to dismiss everything Spencer was telling her because she was on the drugs but it was true. Aria was trying to live her life after Ezra and moved onto other people but Ezra never gave up on her. He even got shot for her, which actually showed me that he at least cared for her the littlest. Of course, Ezra has been there from the very beginning – even when we didn’t realize it – so when he got shot, I started to cry because he was just so important. I swear, if he dies, I will throw something at the TV.

Toby had to be my favorite person on the whole show this season. He was getting help from “A” for the death of his mother. He would do anything to try and get answers and Spencer was there the whole entire time, by his side. But, Spencer kept a lot of secrets from him and it killed me. Spencer was getting on these drugs and wasn’t telling Toby that Alison is really alive so she pushed him away. When he planned the whole dinner and she had to cancel because of the Zoo event, I died because he got her a necklace based on Scramble, which takes us all the way back to the first season when they were looking for Jenna. Toby was vulnable with the whole thing on his mom and he wanted answers. He wanted to know what happened to her, until Spencer’s dad had to cancel the whole thing because he HAD to protect Jessica DiLaurentis. Watching Toby cried made me want to get inside the TV and give him a hug. And I never realized how cute it was to watch Spencer and Toby kiss. Almost every time, they have their foreheads together and they rub noses, which makes me melt. If there are any people better than them, I don’t know.

Hanna changed a lot for me in the whole season and I don’t know how I feel about it. Firstly, did she dye her hair in the middle of the season? I might be going crazy but I swear that she did. And she almost had different hair the whole entire season, which sometimes got confusing for me. After everything that she went through with her mom going to prison for ‘killing’ Wilden, loosing Caleb to Miranda in Ravenswood, and finding out that Alison is alive, I don’t blame her. Somehow I feel like Caleb and Travis have some sort of agreement because in the court house, they seemed to be a little friendly. Also, when did Hanna get really smart? I understand that everyone has their subject of perfection but Hanna randomly got Spencer smart. Hanna even started to take a passion in reading? I love me a girl who reads but James Patterson books? You could do so much better.

Jessica DiLaurentis gives me the creeps, even more in the finale than the rest of the series. After Aria read Ezra’s manuscript for his book on Alison, we find out that he thinks that Jessica could be “A” and it really is making sense. Why else would she tell these girls everything she has? She was the one that did the talent show back a few seasons ago. Jessica might have Jason be her little minion because he was missing for so long. They even show her in Spencer’s room after the whole rehab thing. Now, we find out through Alison that she was the one that buried her alive and saw her get hit with a rock, who knows what else she is hiding!

Emily was also one of my favorites in the season, maybe because she is one of the characters that is showing me that Alison really isn’t that bad. Yah, I am actually starting to like Alison. I still don’t like the fact that she ran off but I am starting to see why. Alison really does need to come home because it is still a guessing game for when she is coming home but hopefully it is soon because she is with her friends on the roof when Ezra was shot. Emily was Alison’s favorite so I understand why everything went through her first. Paige was just in the way almost every time. Paige was the one that turned the fact that Alison was alive to the police. She was the one that kept stuff away from Emily through the whole thing. As Alison raises up on the list of characters I like, Paige continues to drop. Paige knows something or is doing something but we just don’t know yet.

I have really liked the fact that every season has had a themed episode based on a holiday or a movie, etc. This time, while Spencer was on the drugs, she was in a vision of her being in a early 1900’s movie. The dedication that the producers had to make this episode in black and white was something I enjoyed a lot. I am not one for black and white anything but I really enjoyed this version. I also really liked that it shows what happens when you mix drugs and alcohol, but that really wasn’t the main point of the whole entire episode.

Something else I really liked was the fact that whenever the characters went to Ravenswood, the filter and the brightness of the whole thing got darker and looked older. I hope I was not the only one that noticed that. But I really loved their dedication on showing that the town is old fashioned and most of the residents are older. I really liked that same fact. It almost made me have goosebumps because of the difference in the atmosphere, and that is rare when I am watching something.

Where the heck was Melissa through this whole entire season? Even Mike made some appearances – which he hasn’t been in the show since like season 2 – and he was dating Mona! I’m almost positive that she was no where to be seen in the beginning of the season until the whole thing with the mask and she basically admits to Spencer that she was the one that killed Wilden. Then she takes off and Toby finds out that Wren is sending packages to Melissa’s house. Melissa goes to London and doesn’t come back until the season finale, when the cops are in her home, trying to figure out where Spencer and her friends are. Where was Melissa? I am so positive that she is “A” even though she had said that “A” was threatening her. Why did she have mask made in that place in the first place as well? I thought that I would really like Melissa at the beginning but I just don’t. I kind of want her dead if that sounds okay…

I’m not saying that this was a bad season but it was not my favorite. “A” seemed to be really laid back and actually quite helpful so who knows who it is. I thought that it would be Shana but she was being quite helpful when it came with Alison, but she was sent by Melissa to watch the Lodge catch on fire. Who knows. As long as Caleb and Hanna get back together in season 5, I will be fine.