Because of the snow and ice that we got at my home, we didn’t have school one Monday. I might have started season 3 on Sunday and finished it on Monday but I might not of. I totally did. Anyway, I finished the season, and I’m telling you this, I was left in tears. “A” did it to me. She/He/It did it to me. And now she wants me to add spoilers to this because she knows what I am capable of doing. 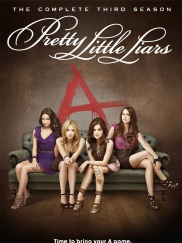 This was the season of tears. I think most of these episodes ended with me drying up tears. I don’t know if it because I have became so close to these characters but I hated seeing things happen to them. The first few episodes where fine but after episode 12, I lost it. I completely lost it.

Since I was just talking about episode 12, why don’t I continue. Firstly, one of my worst fears came true. Toby is “A”. In one of the previous episodes, you see Toby walk Mona to Radley, dressed in the outfit of “A”. But I was not going to believe it until I saw it for my own eyes. I cried my eyes out. Toby broke into Spencer’s house, on the day of their anniversary, which killed me. The fact that Spencer had an idea the whole entire time was worst. Everything that comes later to Spencer is worst but that can wait til a little later. Then we have Caleb getting shot during the whole thing when Emily is taken by Lyndon. Hanna’s reaction to the whole thing is the thing that I hated the most. Hanna is loosing it and the cops are keeping her away from him, and Emily isn’t there to comfort her through the whole entire time.

I loved Spencer through the season. Yes, Spencer did go a little crazy. Yes, I was right as well about Spencer. She was “A” for a point of time. Spencer went from being perfectly normal to being a patient at Radley. Spencer was somehow able to keep her calm through the whole thing, unless it was about Toby. The only reason why she was at Radley was Toby. He left her after everything and he had no way of making contact with her. Spencer went insane. She followed Mona to the woods and thought she saw his body dead. She breaks down and is taken through Radley. While in Radley, Mona came and took her into the “A” family. Of course she is done being “A” for now but you never know.

The relationships where high through the whole entire season. Ezra finding out that he had a son so Aria felt like she was being put on the back burner. Toby was “A” and Spencer ended thing with him – the same they had sex for the first time. Caleb and Hanna met Caleb’s dad who “A” set up. Paige was set up as “A” and all the girls but Emily believed it. The worst one is still Toby and Spencer. I don’t know but I just love them together. The fact that Toby was “A” just to protect Spencer broke my heart. The first time that Toby saw Spencer after he left just killed me. Toby goes to met with someone who he thought was “A” so he sat down and said, “Hanna got the job,” and she replied with, “I know,” the look in his face was priceless. I don’t know but they are way too cute.

I still don’t like Wren. I still don’t like Alison. I don’t like Paige either. Even though it was proven that Paige wasn’t “A”, I still get the feeling that she is part of something. Paige was part of the whole situation with “A” on the Halloween train but she might not have been part of it then. Where else would she have went for so long after the even? Maybe that is just me talking crazy but who care. I’m starting to see evil in Wren. He was helping Mona at Radley with getting out and allowing CeCe in, who I also don’t trust that much. But Alison, I still have a lot of problems with. She is making it so obvious that she is alive and I don’t know if that is what she is trying to do! Alison did help the girls with so much but if she is playing these girls and she is not dead, I’m going to loose it. I really will. She has hurt them so much and it will make them go crazy.

I wish that Mike was part of this season. Mike has been kind of gone from this season and half of the last season and I don’t like that. I really enjoyed Mike. I liked watching him grow up and I really wish I could continue it through this season.

This season seemed to be my favorite. I know, I said that both of the times but this one is totally my favorite. The way that is was directed and written was beautiful. I wished that I saw the girls in class more often than what they were because that was one of my favorite things from the past episodes. The girls are growing up and I really like that. As the girls grow, the show grows.

The one thing that I didn’t like from the season is the fact that Emily couldn’t remember the night from the first episode. I know there has to be some mystery in the season but couldn’t they have Toby as “A” be the mystery. Spencer was convinced that he was dead but in reality, he wasn’t. Emily does remember the night eventually, with some help from the other girls, but I really didn’t like it. Then Jenna sort of lied to her and so did a few other girls but I really don’t know if I trust everything she knows. The fact that “A” or someone drugged her as well and she doesn’t remember the night is kind of scary.

I still have the feeling that Melissa is “A”. Melissa is becoming part of more stories. She was there the summer that Alison had the pregnancy scare since she was the one that took the picture of Alison, Cece and Wilden. We find out that Melissa wasn’t pregnant in the first place (which I was right about) and she was the Black Swan during the party. She has lied to everyone about a bunch of stuff and she has been missing so much. Even though Garrett revealed that he didn’t kill Alison to Spencer, Melissa was still their. Melissa knows a lot more than what she is letting on and I want to know. But one of my other thoughts are: what if it is one of the moms? What if it is Veronica, who happens to be a lawyer which means she can get herself out. Ashley because she wants to know what is going on with everything, and she seems to be out of the house whenever something bad happens to them. Pam just so happened got a job at the police station. Is it to protect herself? Ella moved out and you really don’t see her home during the whole thing. What if she is keeping people there? All I know is Jenna is some part of the heads of the “A”‘s so…. Melissa still has my beat. Along with Wren, Alison and Paige. This is almost like a hate section. Not my fault.

I want to say that I trusted Garrett and sort of liked him. Garrett was the one that said that he knew what was going on with Alison’s body to Spencer when she went to visit him in the beginning of the season. I think the only reason that he made those promises with Spencer is to get her mom to be his lawyer. Her mom was able to get him out and she got the answers that she wanted but Garrett ended up dead. We have no idea who killed him either. It has to be one of “A”‘s minions because there were a million of them on that train on Halloween. What if it is Melissa that killed him. I am almost positive that she was there and she was the one that drugged Aria on the train. I was right about her being the Black Swan so I have to be right about this one.

As soon as I finish this, I am going back onto Netflix and watching Season 4 and I am so excited. I want to see what is going on with Toby since he never came back to Spencer during the last episode. Where is Caleb and his dad because I really don’t trust his dad that much. Paige? I want so many answers but I don’t know if there is enough time for that in the world.