I finished watching Season 1 of Pretty Little Liars the other day and I automatically wrote my review on the season. As soon as I finished that review, I turned Netflix on and I started Season 2. Let me tell you, I was in the zone. I literally spent the other day, in bed, with hot chocolate, watching at least 10 episodes of season 2. I finished it and here I am, ready to talk about season 2. Like last time, “A” is warning you about these spoilers in here. 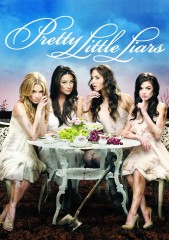 I was hoping that this was going to be one of those shows where as the seasons progress, the better the show gets. So far, I have been right. Season 2 was amazing. I loved this season. Yes, there was moments that I didn’t like it but I think that is any type of show or movie.

“A” was finally revealed in the season finale and I was sort of right. In my season 1 review, I was thinking that “A” was either Melissa or Mona. Well, as far as we know, Mona was “A” and Spencer was the one that found that out. Spencer really is the smart one from the group, isn’t she. I should have known that Mona was “A” during the Truth Up event because she was talking about how she knows a bunch about using computer programs and all this kind of stuff. Even though Mona is said to be “A” I still like to think that there is going to be another one. Since Spencer was there when Mona died/went crazy and was talking about her becoming part of the group of “A”‘s or whatever or leaving Rosewood, something tells me she is going to be part of this group. Mona was said to have this disorder and she is seen in a mental hospital at the end. This person comes into her room, wearing a Red Coat. Part of me wants to believe that it was Alison, but a lot of my gut still thinks it is Melissa. I don’t know why but Melissa just seems like the perfect “A”. She knows about everything about Spencer’s friends – where they live, phone numbers, parents, etc. There even is the video of her in Ali’s room, Ian, Garrett, Jenna and Melissa the day she disappeared. All I know, “A” is still not gone.

I still don’t like Alison. I don’t hate her as much as I did in the first season but I still don’t like her. Like Spencer’s mom said in one of the episodes, the problems didn’t start when Alison died, it started when they met Alison. It seems to be true. Yes, Alison brought these girls together and grow but she is torturing them. We all KNOW that she has to be alive because she came to save Emily from the shed and she visited Spencer after the accident with Jenna and Jason’s house. Alison had way too many questions and she always seemed to play around way too much. Alison thought she knew everything and she was always stuck up. I do have to give it to her. I don’t know how she lived with Jason though. I really don’t.

I guess I have a problem with the whole DiLarentis family. First Alison, now Jason. Who would have guessed that Jason and Spencer are related? I did not see that coming. And the fact that Melissa was sort of going out with him is more disgusting. Melissa was sort of messed up the whole season anyway. Jason seemed a little more dark and drifted away. It almost seems like Jason knows where Alison is. It is almost like she is living in that house. But if she was, she would have been dead because of the firs that happened in the house. But, I also think that Jason might have done something to Alison in the first place. Where did he really disappear to when he left? Jason knows more than what he is letting off.

Question Time: Why don’t people like Spencer and Toby together? I personally love them together but I was reading somewhere that a lot of people say that Spencer is using Toby? Have I missed something major or is it coming up in the next season or something? Literally, Spencer and Toby beat Ezra and Aria, which I didn’t that would happen, ever. When Spencer and Toby are together, I automatically smile, and it is almost like the scene is better. They listen to each other and they understand each other perfectly. During the season, when Spencer and Toby break up, you have no idea how much I cried. And when Toby came down to the Court House when Spencer, Aria, Hannah, and Emily were stuck there, and confessed his love for her no matter what, it broke my heart. Everything that they did for each other was beautiful, even when Spencer had to end it with Toby to protect him. When Toby got on the phone and said the name Dr. Sullivan in the phone, I knew he was going to be up something good and he was.

You know when you have a fly or a bug flying around but it is determined not to be forgotten so it flies closer and closer to you? Well, Wren seems to be that person on the show. He was sort of the reason why Spencer and Toby broke up for the second time in the season and he seemed to be the only doctor that worked in the whole entire hospital. There was a like a million floors on the hospital and it looked like a million doctors but it was always Wren. Wren would try to get Spencer whenever he could away from Toby and would always break my heart. I never liked Wren from the beginning. What makes you think that I would like him now?

I thought for a few episodes that Dr. Sullivan was “A” but I was wrong. Dr. Sullivan was the only person that the girls trusted and I was amazed how open they were. During the one important episode, I seriously thought that she was going to die but she is not dead. Dr. Sullivan knew who “A” was and when she came close to telling the girls, “A” (or Mona) came and destroyed the place. The therapy never seemed like a good idea to me in the first place but I came across to liking Dr. Sullivan.

I was in love with Ezra and Aria in the first season but as I continue on with the series, the more weird and messed up it is becoming. Ezra was stupid enough to tell Aria’s parents and now they are out to get him. Aria’s dad got him fired and offered him a job in New Orleans. Aria was almost sent to a All Girls School in Vermont, several states across from Pennsylvania. Ezra and Aria are practically illegally together but that is something that I really like about it. I love the one part where Ezra goes to this event that Aria’s parents are hosting and he leans over and ask Aria if he should be worried about Jason. As he leaves, he goes and basically reveals to Jason that they are going out but I don’t think that he caught onto the talk. I do want to see more of them though.

My heart reached out to Emily during the finale, when she found out that Maya was there. My one thought is, why was Melissa there? Was she the one that killed Maya? I mean, I was never a big fan of Maya’s but to see her dead, I was a little devastated. Emily’s reaction to the whole entire thing was priceless and I could not believe that someone would want that her dead? But, I was just thinking, maybe Jason did this. Jason and Maya were talking that one time and I have no clue why they were. This was the season that I thought, “This is the season of seeing how many girls Emily can hook up with,” because she seemed to be with another girl every single episode. I didn’t really like any of them in the first place any way. Maya was just the worst out of them all though.

Hanna seemed to open up more in this season to Caleb. Caleb seemed to open up more to Hanna as well. These two are amazing. I used to wonder why people like Hanna with Caleb more than Spencer being with Caleb and now I know why. Hanna tried to protect him in any sort of way and I loved that. Hanna tried to back the detective away from Caleb when he was following him. Hanna wanted Caleb to stop his business with the phones and laptop. Hanna wanted him to know as little as possible about “A” but he found out some more stuff. You knew that these two were perfect for each other when Hanna went to hack into his laptop and delete everything that “A” put up there.

All the character seemed to grow up a lot this season, especially Mike. Mike got into trouble with breaking into homes and now he seems to be in a good place. He harmed his own mother and his dad doesn’t even know the truth. Mike learned about Aria and Ezra’s relationship and punched him in the mouth. Congratulations to I. Marlene King for coming up with the best character developments I have seen on ABC Family/Freeform.

The best part of the whole entire season was when the girls had everyone fooled that Spencer and Emily hated each other. Emily and Hanna didn’t like each other either. The girls looked like they were turning on each other but it was just for show for “A”. I thought for sure that these girl hated each other and I hated watching this happened through the whole entire thing. I didn’t want to watch a show where they all hate each other. But, they fooled me, along with “A”. Their plan worked. They even managed to get “A”‘s phone and Caleb was the one that got into some of it. I don’t know why I liked it so much but I really did for some weird reason.

To end this whole entire thing, I’m really confused why Jenna didn’t reveal the truth about her being able to see from the one eye. She told everyone, at least on screen that she couldn’t see but she went to the party without her glasses and stick, she killed a fly and cleaned it up and SHE DROVE A FREAKING CAR. I don’t even like being in the car with my dad when he is driving and he has been driving for the past 30 some years, so what makes you think that a blind but not blind person can drive a car? What if she was never blind at all? I don’t know but that is starting to become one of my new theories that I want to know if it is true or not.

I’m really excited to see what Season 3 brings and I am hoping that “A” is gone for good, but we all know that isn’t going to come in my favor. But it better not be someone I actually like on the show like Toby, Spencer, or Caleb. My heart would break if it is but something is telling me that it is going to be Spencer.

Have you watched Pretty Little Liars before? Are you all caught up on the show? If you are, what was your favorite part about season 2? Favorite character on the show? Let me know your thoughts in the comments!