Since I recently watched the movie Neighbors and reviewed it, I decided that I would watch the second movie and do the same to it. I found the two movies pretty similar to each other, the second one being a lot funnier but liking the first one a little more. Like the first movie, only mature adults should watch this movie so I totally don’t recommend this movie to be watched together for family movie night! 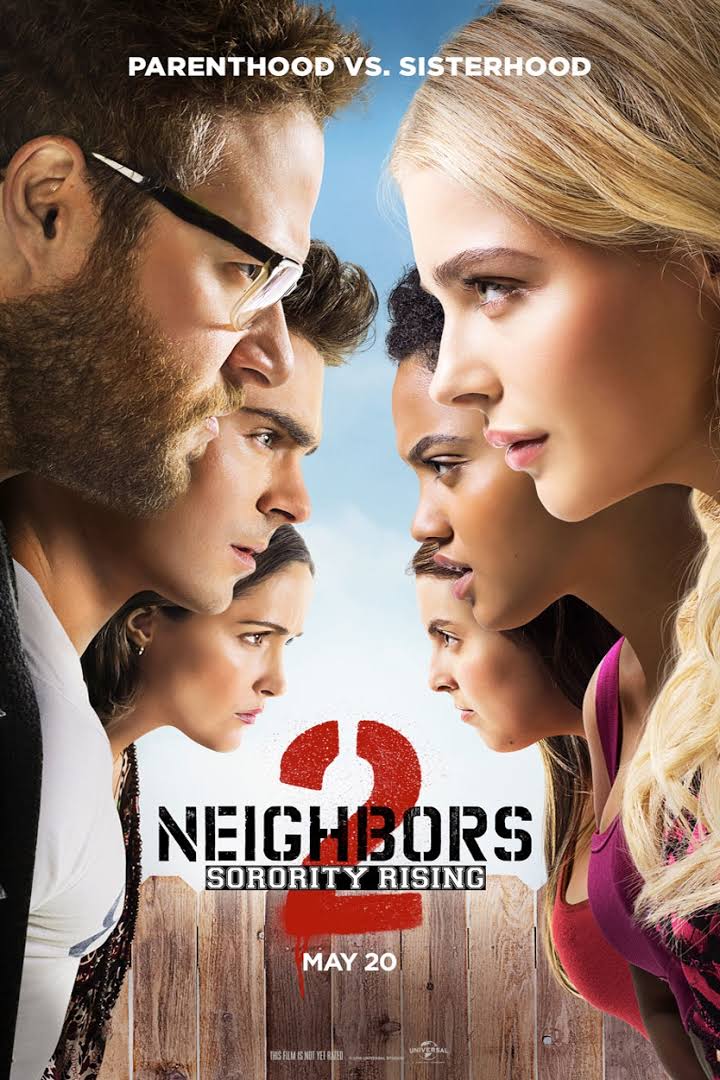 Life is good for Mac Radner and pregnant wife Kelly until the unruly sisters of Kappa Nu move in next door. As the loud parties threaten the sale of their home, the couple turn to ex-neighbor and one-time enemy Teddy Sanders for help. Now united with the former college student, the trio devises schemes to get the wild sorority off the block. Unfortunately, the rebellious young women refuse to go down without a fight.

During one of the parts the sorority throws, Shelby locks Teddy and Mac into the garage to stop them from calling the cops. Shelby locks them in there so neither of them could get out and no one could get them out. Teddy and Mac really weren’t getting along so while they were in there, Teddy ask if after the sorority leaves, would they still be friends. Mac tells him that they would still be friends and the start to throw things at the door to get out. Mac throws a weight on Teddy’s foot and Teddy gets his revenge. He picks a tire up from the ground and throws it at the door. It hits the door but ricochets back to Mac. Mac falls on the floor and Teddy realizes a way to escape: the return of the air bags. He breaks into the car and takes out the air bags to jump onto and fly out the roof. Teddy hits the car and fails. Mac tries and instead of going up, he goes left into the door. He breaks open the doors and his wife, Kelly is standing there.

The weed is back into the plot. To pay for the rent, Shelby and the sorority decides to seal weed. Teddy gets fired from the sorority and goes over to Mac and Kelly’s. Mac begins to talk about how his dealer is clean and he can’t find any weed. Teddy tells him and Kelly Shelby’s idea and they begin a plan to steal it all.  They go to tailgate, where the girls are sealing the weed with a shirtless Teddy and Mac, Jimmy as a clown, Kelly as a cheerleader and Paula in costume. Teddy gets on stage and draws all the sorority around it so Mac can get the weed. Mac grabs all the weed and Shelby catches him. Shelby and the girls begin to go after Mac for the weed. Jimmy appears, blowing an air horn in their faces trying to help. Teddy begins to run with them when Mac throws the weed bag in the garbage pile. Teddy grabs the wrong bag and the girls grab the bag Teddy has in his hand. They realize that it was trash as Mac uses his ‘weed senses’ to smell the bag out. He grabs the bag and Teddy reaches up to him. Mac gives Teddy the bag and Kelly pulls up with the truck. Teddy and Mac get into the truck and they head off, with the sorority not being able to stop them.

In the first movie, I really honestly never liked Teddy. So when I say that he is my favorite character in the second movie, it catches me by surprise. Teddy was so tough and determined to get inside of girls pants during the whole first movie. He really didn’t care for anything unless it meant getting the ‘old people’ back or partying. In the second movie, he is heartbroken and hopeless. His best friend, Pete, is engaged and just kicked him out of the house. He really doesn’t know what he wants until the sorority kicks him out. Even though he is still getting back at someone, he has a reason to and he still has a heart while he is doing it. You watch him grow up from being immature into an adult who has no idea what he wants to do with his life. By the end of the second movie, you see him with Pete at his wedding and you find out that he is working with LGBT marriages and he really enjoys it.

Quite honestly, I believe that they really did do a good job with finding the right person as Teddy. I have been a fan of Zac Efron’s since High School Musical (I sound really old now) so I enjoyed watching him go from Disney movies into doing rated R movies. Yes, these movies are rated R. Yes, my parents know that I watched the movie. I might have watched them with my parents. I really couldn’t see anyone else being Teddy in this movie.

Jimmy, oh Jimmy. I didn’t like Jimmy in the first and I really didn’t like him in the second movie. He was the weird, unique, and interesting character in the series. Jimmy was way to outgoing then anything. He was always the last to understand anything and bring up the most interesting ideas/topics to the table. He was a pretty loyal friend when it came to Mac – since he was the one who made the connection between Mac and Kelly when Shelby got the two to get into a fight. He dressed up as a clown for almost everything. But at the same time, he loved his pregnant wife. He wanted the best for everyone but he was unique when it came to him showing love.

Don’t get me wrong, the actor Ike Barinholtz is really good but I really didn’t have him in mind for this character. Jim Parrack, who was Hoyt in True Blood, would have been a better pick for Jimmy. Jim’s character Hoyt was practically another Jimmy – unique, loved everyone around him, and interesting. Also, if you saw a picture of Jim and Ike side by side, you would see a slight similarity between them.

I would have to give this movie a 4 out of 5 stars. Yes, I did say that I liked the first movie better and I gave it a 3.4 out of 5 stars. I just laughed a lot more in the second movie and I liked the plot behind it a little more. The two movies had their similarities including: the drugs, getting back at the ‘old people’ – Mac and Kelly -, and me wondering who is looking after Stella while Mac and Kelly did all these things but the second movie was shot slightly better. The movie is really rated R since the movie starts off with a sex scene and Kelly puking on Mac. The movie should still be viewed by mature viewers as well. I really enjoyed the fact that there wasn’t as much nudity in the second one as the first one but the sex toys were crazy! Almost every time you saw Stella, she had one in her hand. In the first movie, they were scared to death about her eating a condom but in this one, they have her playing with sex toys. The whole thing was just weird.

How the whole movie was going to end was pretty easy to figure out. Mac and Kelly were trying to sell this house to a couple. The couple starts the process of selling the house and of course the sorority had to move in right next door. The sorority wants to get revenge on Mac and Kelly and war begins. Instead of having Stella eating a condom in this movie, they have her playing with a used tampon. Yep, it was used. The war continues on and of course, Mac and Kelly had to win. Mac and Kelly gives their house to the sorority, as long as they gave them 5 buckets of money (about $5,000) every month. They move into their new house. A little after the move, Mac and Kelly have their second kid, Mildred and they end up being one big happy family with Jimmy and Paula.

Have you seen this movie or have been wanting to watch this movie? If you have seen a rated R movie, do you remember what your first rated R movie was you watched? The first rated R movie I watched was the 1976 version of Stephen King’s Carrie and I enjoyed the older version better then the remake with Chloe Grace Moretz in it… Ironic I brought that movie up since she was in this one… Let me know your thoughts in the comments! I would love to read them!