It’s the weekend, finally! After about a million of test and loads of hours of studying, I get to take a small break, but I have to study for the PSAT which is coming up very soon 😦 But that isn’t stopping me from reading my books! 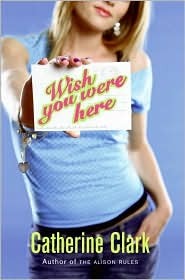 Title: Wish You Were Here

The next morning we meet at the world headquarters of Leisure-Lee Tours. Which is a sentence I never thought I’d write. Ariel Flack never thought she’d write a postcard saying Wish you were here, especially to Dylan, the boy she’s had a crush on forever and is finally (sort of) dating. She also didn’t know she’d be sending that postcard from the family vacation from hell–a two-week geriatric bus tour with her crazy mom, annoying sister, embarrassing uncle, and frighteningly energetic grandparents. As South Dakota rolls by at five miles an hour, Ariel begins to learn that sometimes life is just too complicated to fit on a postcard. Sometimes your parents let you down (and sometimes they don’t). Sometimes you meet an unexpected fellow traveler. And sometimes you just have to go where the road takes you–even if the tour bus won’t.

About the Author: I love reading books for children, young adults, new adults and all the old people after that.

I love writing for pretty much the same audiences.

Writer of YA and MG novels including “How to Meet Boys,” “How NOT to Run for President,” and the upcoming “11 Things I Promised.”

This summer was going to be like no other summer for Ariel. She has a boyfriend named Dylan, part of her school’s track team, and her life has changed since her parents divorce. Ariel’s mom reveals that they were going to take a vacation, but reveals to Ariel and her sister Zena (their parents believe in kids having interesting names) that the three of them and their grandparents will be taking a road trip. Ariel was already upset about not have a laptop with her and her boyfriend, but now, being stuck on a bus for a few days took her overboard.

All Ariel had to keep her stable and alive for the whole trip was her postcards and this guy named Andre. Andre didn’t want to be there as much as Ariel wanted to be there. Andre’s mom is high fashioned so I wondered what made her want to have this idea. Ariel and Andre begin to sit together on the bus, Ariel did her postcards and Andre studied vocabulary. Then, it escalated to hanging out together. Ariel and Andre’s mom became good friends and Zena made some other friends while on this trip. Ariel though, she only stayed with Andre.

The first time that Ariel found internet, she emailed Dylan telling him that she will be close to him on one of the days and said that they need to meet up. With keeping the phone call that they had before she left about how what happens during the summer doesn’t matter, she still sends the email. She tells Jenny, one of the leaders of the bus, that she needs to be in that location on that day because she had to run a marathon. Jenny says that they will try to make it but they can’t promise anything.

Andre begins to create a plan with Ariel to find a way to escape. The two of them try to escape several times but something is always standing in their way. For example, either one of their moms stop them, the time Andre’s dog Cuddles get lost, or any of the other passengers.

Ariel’s grandfather decides that he will run this marathon with Ariel once Jenny discovers a real marathon on the trip. Ariel wasn’t sure if her grandfather could handle the run because of his past ‘Harley Days” but he is able to do it. Ariel and her grandfather start to run every morning to get in shape for the marathon.

Time continues to past, and Ariel’s mom stops Andre and Ariel from sitting together. Ariel and her grandfather continue to run every morning to prepare. Ariel is still mad at her mom for what she said about moving.

While stopped, Ariel and Andre are sitting together and Ariel drops some of her favorite candy, Skittles. Andre picks one up and ask her if she would eat a dirty one. He puts it in his mouth and ask Ariel if she could taste the grape right before he kisses her. They kiss a few more times, even though Andre doesn’t want another girlfriend and Ariel has Dylan.

After everything that happened, Andre and Ariel rarely talk. On their final trip to Mount Rushmore, the two of them finally talk. Ariel goes into the gift shop to buy some postcards. While she is doing that, she sees her dad, who is the last person she thought she would see. Her dad and her meet up with Andre and they begin to talk. Her mom reveals to Ariel that they were officially moving, no matter what. Her dad promises that they will meet up for dinner the next night.

Like always, her dad didn’t keep his promise. Andre calls Ariel and ask to meet her. Ariel tells him to meet her in the morning, so they can make their grand escape. Ariel decides that she would write a postcard explaining it all but she decides not to. She keeps it in her waistband of her shorts and takes $40 but gives Zena the $100 that her dad gave her. She meets up with Andre and they begin their journey.

Andre and Ariel find a couple who are taking a road trip with their kids in an RV. The couple agrees to take the two of them in and Andre makes a point that the two of them might be bad luck because not only did the bus break but the RV broke. Ariel makes her way to her marathon where she sees her whole family there. Her grandfather makes it a little before her and Andre behind her.

Right before Ariel leaves to go home, she makes sure to tell Andre that they should keep in touch, and he agrees. As her uncle Jeff ask her if she is ready, she goes and puts her Oklahoma! CD on the bus’ stairs.

Not as Good as Picture Perfect:

I read Catherine Clark’s Picture Perfect before I read Wish You Were Here and I really enjoyed it. I thought that sense I enjoyed that one, I would like one. Something about how the words were arranged and the idea of it, I didn’t like.

To me, the book was predictable. When you first get introduced to Andre and his mom, you know that something is going to happen between Ariel and Andre. You knew that Ariel’s dad was going to make it into the book somehow because of how often he was talked about in the book. Finally, Ariel and her mom were going to have some problems in their relationship.

Don’t get me wrong, the book had a good idea but the characters and the events were just way to inrelatable to my life. I can’t relate to parents getting divorced, having to leave the town because of pity, and sitting on a bus for a few days with my family. The whole idea behind it was a great idea. If the book was executed a little better, I would have liked it better and gotten a laugh out of it.

I gave this book a 3 out of 5 stars on Goodreads but in reality, I would give this book a 2.8 out of 5. Like I have been saying, the idea was good, but I couldn’t relate to anything. The characters really weren’t thought out well enough for me. The book didn’t have as great as a wordplay as Picture Perfect and some of the events didn’t make sense. I wish that I could relate to at least one character and maybe I would like at least liked it a little more.

What has been your favorite read so far this month? What is the current book that you are reading? What do you have planned to do this weekend? Let me know your thoughts in the comments!

One thought on “Wish You Were Here: Book Review”