When I was in Pennsylvania back in July, my mom and I went through the books that my grandmother had. We decided that she might have some good classics, or maybe if we got lucky, some books Nicholas Sparks wrote at the beginning of his career. I found this book and I thought that it would be a funny, light, easy read. The thing I didn’t realize until half way through the book – it is a memoir. 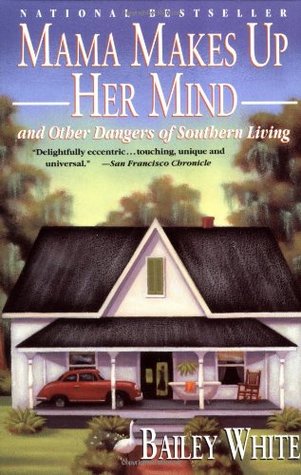 Title: Mama Makes Up Her Mind and Other Dangers of Southern Living

Welcome to the unique world of Bailey White. Her aunt Belle may take you to see the alligator she’s taught to bellow on command. Her uncle Jimbuddy may appall you with his knack for loosing pieces of himself. Most of all, you may succumb utterly to the charms of Bailey’s mam – who may take you to Rosey’s, a North Florida junk joint so raunchy it scared Ernest Hemingway, and then tuck you into a antique bed that had the disconcerting habit of folding up on people while they’re asleep.

Bailey White’s indelible vignettes of Southern eccentricity have entrances the millions who have heard her read them on National Public Radio. And now she had written Mama Makes Up Her Mind, a book that is as sweetly intoxicating as a mint julep and as invigorating as a walk in Bailey’s own overgrown garden. 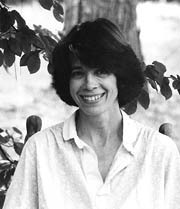 About the Author: Bailey White was born in 1950 in Thomasville, Ga. She still lives in the same house in which she grew up, on one of the large tracts of virgin longleaf pine woods. Her father, Robb White, was a fiction writer and later a television and movie script writer. Her mother, Rosalie White, was a farmer, and worked for many years as the executive director of the local Red Cross Chapter. She has one brother, who is a carpenter and boat builder, and one sister, who is a bureaucrat. White graduated from Florida State University in 1973, and has taken a break from teaching first grade to pursue writing full-time. She is the author of Sleeping at the Starlite Motel, Mama Makes Up Her Mind, and Quite a Year for Plums.

Why I Wanted To Read This Book:

Like I have said, this book was a memoir. I originally thought that this book was fiction and that she was making the whole thing up. It took me til section 2, Family Ghost, that I realized that it was a true story. The way the book is written at the beginning of the book makes the characters feel so made up. The characters feel like they shouldn’t be real. As you get along in the book, you start to notice a time jump between the stories in the book. The book is a collection of short stories – which I am not a fan of in the first place. None of the stories really connected with each other, minus her mom, who really wasn’t that funny in the first place. Her mom had way to many problems for me and she seemed like a second hand character, where I thought the book was going to be about her.

Mama is Bailey White’s mom. Mama has raised a few kids of her own and lost her husband. Mama drives very slow, where in one part they told her that she should not drive people to the polls because by the time they get there, the polls would be closed. Mama relies on Bailey for a lot.

Mama said a lot of crazy things in this book, and did a lot off crazy things. One of the funniest things in the whole book was the story about Mama sitting in the bathtub in the backyard because the one time she did it, bike competitors rode their bikes through their yard. Mama also claims she saw a UFO at one point and had to tell the fan of ET’s about this. But, there was one thing that got me to laugh more than anything else in the whole book and that was when Mama said this:

“I’m tired of being set upon by crazed Christians one minute and unbridled libertines the next. Girls, I’m going camping.”

I thought the whole book was supposed to be about her mom. I thought that until we got to the short story, The Monkey’s Not Seen, where you meet some more of Bailey’s family, which is fine, but they seemed to be more important than the mom. I really liked the mom but as Bailey started to go on about her own life, I didn’t like it.

Semen and Daffodils is the best short story in the whole entire book. Bailey was planning a trip to New York, where she was planning on taking the train the whole entire way. She has the idea of telling the passengers that she is pregnant, even though she wasn’t, so they would be nicer to her. Most of the passengers treated her better, especially this one guy who told her that she wasn’t suppose to carry her bags so he carried her bags. The daffodils in the title of the short short comes from the fact Bailey was carrying some during the train ride.

I hated the way the book flowed with the characters and the stories were told. I feel like the way the story was written was terrible. The book was written in a very different, old fashion, style which was really interesting. I felt the written was way to elementary and old fashion to me. At times, I had trouble understanding the book because it jumped around way too much.

By the end of the book, I felt like Bailey White was rushed to finish the book and threw in stories that had nothing to do with the book. The last few chapters about her time as a first grade teacher wasn’t that exciting. Nothing really had to deal with her mom and that is what I wanted to read about. I didn’t want to read about her not knowing that the abbreviation for MA wasn’t Maine, yes that was a whole chapter.

I gave this book a 2 out of 5 stars on Goodreads but in reality, I give this book a 1.8 out of 5. The characters, even though they were real, were way too annoying to me. Nothing in the book flowed well together, it seemed to random to me and thrown together. I really hated the writing of the whole book. The one thing that kept me reading the book was Mama.

Have you read this book? Does this make you want to read the book? Do you like memoirs or short stories, or are you like me? Let me know your thoughts in the comments!

One thought on “Mama Makes Up Her Mind: Book Review”