To add to the movies I watched on Tuesdays (Finding Dory and The Secret Life of Pets), we went to see the movie Nine Lives. I really didn’t want to go and see the movie because I thought it looked pretty stupid but everyone else wanted to see it but, I’m still glad I went to see it. 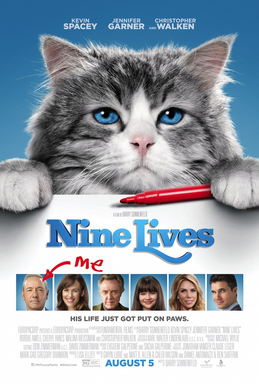 Tom Brand is a billionaire whose workaholic lifestyle takes him away from his loving wife Lara and adorable daughter Rebecca. Needing a present for Rebecca’s 11th birthday, Brand buys a seemingly harmless cat from a mysterious pet store. Suddenly, a bizarre turn of events traps poor Tom inside the animal’s body. The owner of the business tells him that he has one week to reconnect with his family, or live out the rest of his days as a cute and furry feline named Mr. Fuzzypants.

Once Tom Brand learns that he is Mr. Fuzzypants, he goes into his office and gets himself drunk. He claws at the cabinet that he puts it in and easily moves the bottle to the small foot seat. He pops the lid off of it and puts some into his dish. He drinks it up and walks around the house drunk. He pees on the rug stating, “I always hated that rug” and continues to walk around the house. Tom tries to tell himself that he is not a cat but he is. He ends up in the corner of the kitchen when he wakes up by his wife Lara finding him.

No, my favorite character is not the cat. I love Tom’s son David from his first wife. David was a character that I really enjoyed during the whole entire movie. David wanted to show his dad that he could really take charge when he wasn’t there. While his dad was in a ‘coma’, David was in the office trying to make sure everything was still working right. Even before Tom was gone, David was working on trying to find a way to make Firebrand’s new building the tallest. Of course, David was seen as crazy, and to Tom “not a man yet”. David really did love everyone he got to know, and he was determined to protect them. For example, Ian was one of the villains in the whole movie. From the very beginning, he was trying to sell Firebrand. Ian wanted to make the brand his and he wanted nothing to do with David or Tom. Ian was there when Tom became a cat, and let him become this way since he didn’t even try to save Tom when he was struggling on the side of the building. Once Tom was a cat, he was determined to sell Firebrand. David was determined to fight for it because Tom was his dad. The company would have been David’s if anything every happened to Tom but Ian didn’t like that so he destroyed all evidence of it. David wanted nothing to do with that at all so he had a plan. The day that the building opened, he went on the top of the building and jumped. Tom follows him because he knows that he had to make some sacrifices to become human again. Little did we know but David had on the parachute that Tom gave him in the beginning of the movie. Based on this move, Tom became Tom again, David was still alive, and Ian became the newest creature of Felix Perkins’ cat.

The actor that they picked to play David I feel was perfect. Robbie Amell has always been one of my favorite male actors, even from a young age, with starting with True Jackson, VP. Robbie was able to channel all the emotions that he needed to for the role. The one thing I really love about Robbie is the fact that he is allergic to cats but he wasn’t going to stop him from staring in a movie with Kevin Spacey.

I honestly never liked the mom, Lara, in the movie. Lara to me seemed like she liked Tom for his money. Lara of course cared for him but she was ready to leave Tom. Towards the middle of the movie, you learn about another male character named Josh. Josh was a realtor who was helping Lara find a home since she was getting ready to leave Tom. During one of the trips to see Josh, Tom jumps into the car and goes to see who Josh was. Lara is there, saying that they need to stop it. Josh has no clue why she is saying this and that is when Lara sees Mr. Fuzzypants. Of course Lara puts him into the car and begins to tell her problems to the cat, with no knowledge of Tom being the cat. Tom was the one that really didn’t want to get Rebecca a cat for her birthday but it looked like Lara was the one that really didn’t like cats. Lara didn’t have anything to do with the cat until they cuddled in bed one night. Lara looked like she was someone who loved to party since she constantly had over Madison, Tom’s exwife, and Nicole, Madison’s daughter. Behind everything, Lara still loved Tom, no matter what she said. When Tom woke up, she was there. Even though Lara didn’t believe Rebecca when she said that Tom was in the cat, she still had her doubts about it. Lara just wasn’t the person I had in vision for the person that I thought would be there.

I think part of the reason that I really didn’t like Lara was because of Jennifer Gardner, the actress that played her. I have never really been a fan of Jennifer’s for some reason so I warned myself that I probably wouldn’t like her character. I saw her acting elementary styled, like she could have used a little more time to prepare for the role. She played the character well but I really didn’t like Lara.

The message came out through Tom, which was something I never would have thought. Through Tom’s early actions, you learn that you still need to spend time with the people you love. Tom was always at work and never really got to know Rebecca. Tom was so focused on making the Firebrand building the tallest that he forgot about Rebecca’s

birthday. When Rebecca said that she wanted a cat, Tom wasn’t sure about the whole thing but he decides, with the help of his employees that he would get her a cat. Well, the cat store owner, Felix Perkins turns him into a cat, with telling him that he needs to find out how he got himself into the situation. While being a cat, he learns that his family does truly love him and that they really need him. Tom does so much for his wife, son, and daughter while he is a cat like doing:

Without becoming Mr. Fuzzypants, Tom wouldn’t have learned everything that he did about his family. He would still be at the building, trying to figure out how to get his building the tallest. The powers that Felix had to make Tom a cat was some of the best powers of all.

I would have to give this movie a 2.8 out of 5. The movie had a great plan but it didn’t rise to the occasion. The movie had it’s strong points, like bringing a family in but it also had it’s weak points, like the whole roof scene. The movie was edited in an amazing way to really allow the younger age viewers to really think a human could become a cat. There were just a lot of stuff I really didn’t enjoy with the movie.

Secondly, the underdog always rises to be the alpha dog. David is seen as the weak, unimportant employee at Firebrand. No one takes David serious, even his own father. Once Tom becomes a cat, David takes it into his own hands to answers problems. He finds a way to make the tower bigger, even though people decided it was terrible. Until the day Tom follows David to work, he doesn’t see him as a great employee. Tom sees all of his ideas of how to make the company better and he says that David was going to be needing a promotion. David was also the one that stop Ian from taking credit of Firebrand and saying that he was doing this for his dad. David grew tremendously through the whole movie.

Thirdly, it’s a family movie so you know that family is the movie background. Family was a big part of the movie. Even though Tom really was never there, Rebecca still loved him. Lara and Rebecca was always there for Tom, and David eventually joined in on the group. They were right there, next to them, right before Lara decided that she wants to pull the plug on Tom. Mr. Fuzzypants brought the family closer, which is how Tom was able to get out of the body of the cat.

I would love to see a movie like this, just with a dog instead of a cat. I am a really big dog person and never really a big fan of cats. I have never really had good experiences with a cat so I never really cared for cats. Cats are cute though but I wish that the movie was based around a dog.

Have you seen this movie? Do you want to see this movie? What is your favorite movie that you have ever seen? Let me know your thoughts in the comments!