Happy Saturday everyone! Hope you guys have a good day and will continue to spend the week happy! But, it’s time for another Author Talk, this time with an author I have loved for the past 3 years. I fell in love with her work right after I finished the Twilight series, and if you have read several of my other post this month, I have talked about the author every time. I’m not crazy. Let’s learn about Charlaine Harris, the master minds behind the supernatural.

A Little About Charlaine Harris: 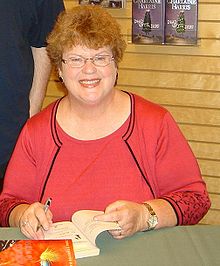 Charlaine Harris Schulz is an American New York Times bestselling author who has been writing mysteries for thirty years. She was born and raised in the Mississippi River Delta area of the Untied States. She now lives in southern Arkansas with her husband and three children. Through her early work consisted largely of poems about ghosts and, later, teenage angst, she began writing plays when she attended Rhodes College in Memphis, Tennessee. She began to write books a few years later. Her later books have been in the urban fantasy genre. She is best known for The Southern Vampire Mysteries series, which HBO later adapted for its dramatic series entitled True Blood.

About the Her Book Series:

Though a small town at heart, Lawrenceton, Georgia, has its dark side-and crime buffs. One of whom is librarian Aurora “Roe” Teagarden, a member of the Real Murders Club, which meets once a month to analyze famous cases. It’s a harmless pastime—until the night she finds a member killed in a manner that eerily resembles the crime the club was about to discuss. And as other brutal “copycat” killings follow, Roe will have to uncover the person behind the terrifying game, one that casts all the members of Real Murders, herself included, as prime suspects-or potential victims.

TO SEE OR NOT TO SEE — To Lily Bard, the sleepy town of Shakespeare, Arkansas, was the perfect place to hide from the violence that nearly destroyed her life years before. Today Lily is strong, confident in the martial arts she studies, her looks disguised by her closely cropped hair and baggy clothes. Working as a housecleaner, Lily comes and goes without anyone noticing — until she witnesses a murder. What Lily Bard saw on that dark night has stripped away her, anonymity and earned her the unwanted attention of a homicide detective and a suspicious community. And with her intense, married, karate instructor showing a passionate interest of his own, Lily’s plan of a private, well-ordered life is coming unhinged. The killer of an unlamented landlord is lurking close by. And while Lily knows the dirt on her neighbors’ dust, drawers, and private live , must admit to a secret of her own: that in the shadow of a brutal murder, she is coming alive again…

Sookie Stackhouse is a small-time cocktail waitress in small-town Louisiana. She’s quiet, keeps to herself, and doesn’t get out much. Not because she’s not pretty. She is. It’s just that, well, Sookie has this sort of “disability.” She can read minds. And that doesn’t make her too dateable. And then along comes Bill. He’s tall, dark, handsome–and Sookie can’t hear a word he’s thinking. He’s exactly the type of guy she’s been waiting for all her life…. But Bill has a disability of his own: He’s a vampire with a bad reputation. He hangs with a seriously creepy crowd, all suspected of–big surprise–murder. And when one of Sookie’s coworkers is killed, she fears she’s next….

Alan Ball enjoyed this series so much that he decided to make a HBO TV series based upon it called True Blood which ran from 2008 through 2014. The show had Anna Paquin as Sookie Stackhouse, Stephen Moyer as Bill Compton, Alexander Skarsgard as Eric Northman, and Sam Trammell as Sam Merlotte.

Harper Connelly has what you might call a strange job: she finds dead people. She can sense the final location of a person who’s passed, and share their very last moment. The way Harper sees it, she’s providing a service to the dead while bringing some closure to the living – but she’s used to most people treating her like a blood-sucking leech. Traveling with her step-brother Tolliver as manager and sometime-bodyguard, she’s become an expert at getting in, getting paid, and getting out fast. Because for the living it’s always urgent – even if the dead can wait forever.

This book series has been passed along the beltline by several companies to be placed on TV. CBS first jumped on the series but decided to skip this project. In 2012,  SyFy decided they want the show on their channel and have had the series on their plate. It has yet to air.

She calls herself Calexa Rose Dunhill—names taken from the grim surroundings where she awoke, bruised and bloody, with no memory of who she is, how she got there, or who left her for dead. She has made the cemetery her home, living in a crypt and avoiding human contact. But Calexa can’t hide from the dead—and because she can see spirits, they can’t hide from her. Then one night, Calexa spies a group of teenagers vandalizing a grave—and watches in horror as they commit murder. As the victim’s spirit rises from her body, it flows into Calexa, overwhelming her mind with visions and memories not her own. Now Calexa must make a decision: continue to hide to protect herself—or come forward to bring justice to the sad spirit who has reached out to her for help…

Welcome to Midnight, Texas, a town with many boarded-up windows and few full-time inhabitants, located at the crossing of Witch Light Road and Davy Road. It’s a pretty standard dried-up western town. There’s a pawnshop (someone lives in the basement and is seen only at night). There’s a diner (people who are just passing through tend not to linger). And there’s new resident Manfred Bernardo, who thinks he’s found the perfect place to work in private (and who has secrets of his own). Stop at the one traffic light in town, and everything looks normal. Stay awhile, and learn the truth…

NBC decided that they enjoyed the series so much that they decided to pick up the show. The show still doesn’t have a release date, right now being in 2016. The show will have François Arnaud, Dylan Bruce, Parisa Fitz-Henley, Arielle Kebbel, Sarah Ramos, Peter Mensah, Yul Vazquez and Sean Bridgers playing the main characters.

I love Charlaine Harris. I love her writing style and her imagination that is exploded into the words on the page. The characters are beautifully developed and the plot is something I will never forget. You fall in love with the book, so much, you want to be part of the book. Beware of the feels and falling in love with characters because you never know what will happen with them!

Have you read one of Charlaine’s books? Have you watched one of her works on the screen? Who is your favorite author and why? Let me know in the comments!