It’s the first day of July, which means I have 13 days before I go sit in the car for a long, long time. But July also brings things like 4th of July. Along with all the exciting things that are happening in July, there are still a lot of books I want to read that are coming out this month. Here are the books I want to read for July 2016!

Based on an original new story by J.K. Rowling, Jack Thorne and John Tiffany, Harry Potter and the Cursed Child, a new play by Jack Thorne, is the first official Harry Potter story to be presented on stage. It will receive its world premiere in London’s West End on 30th July 2016. It was always difficult being Harry Potter and it isn’t much easier now that he is an overworked employee of the Ministry of Magic, a husband, and father of three school-age children. While Harry grapples with a past that refuses to stay where it belongs, his youngest son Albus must struggle with the weight of a family legacy he never wanted. As past and present fuse ominously, both father and son learn the uncomfortable truth: sometimes darkness comes from unexpected places.

Reason for Wanting To Read It: I love the Harry Potter series. So I want to read this book because I want to see what his kids are like and what adult Harry Potter is like. Yes, they did include that in the last book but I want to read a whole entire book with Harry as an adult.

About the Author: Joanne “Jo” Rowling, OBE, FRSL, pen names J. K. Rowling and Robert Galbraith, is a British novelist, screenwriter and film producer best known as the author of the Harry Potter fantasy series. The books have gained worldwide attention, won multiple awards, and sold more than 400 million copies. They have become the best selling book series in history and been the basis for a series of films which is the second highest grossing film series in history. Rowling had overall approval on the scripts and maintained creative control by serving as a producer on the final installment.

What if the person you were falling for was a total mystery? While Lily is spacing out in Chemistry one day, she picks up her pencil and scribbles a line from one of her favorite songs on the desk. The next day, someone else has written back to her on the desk! Soon enough Lily and the mystery student are exchanging notes, and lyrics, and even sharing secrets. When Lily finds out that her anonymous pen pal is a guy, she’s flustered — and kind of feels like she’s falling for him. She and her best friend set out to unravel the identity of the letter writer — but when the truth is revealed, the guy is the LAST person Lily could have ever imagined it to be. Now that Lily knows the truth, can she untangle her feelings and gather the courage to listen to her heart? From beloved author Kasie West (The Distance Between Us) comes an utterly charming story about mixed messages, missed connections, and the magic of good old-fashioned secret admirer notes.

Reasons for Wanting To Read It: All of Kasie West’s books sound amazing, but I have never picked one up and read it. This one sounds like a good one to start with. Her writing styles sort of reminds me of Morgan Matson’s who I love. Who doesn’t love a good, funny, love story book?

About the Author: I write YA. I eat Junior Mints. Sometimes I go crazy and do both at the same time. My novels are: Pivot Point and its sequel Split Second. And my contemporary novels: The Distance Between Us, On the Fence, The Fill-In Boyfriend, PS I Like You, and By Your Side. My agent is the talented and funny Michelle Wolfson. 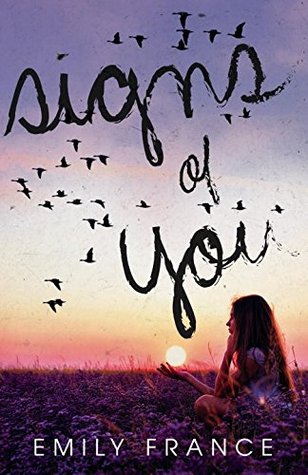 Title: Signs of You

Since sixteen-year-old Riley Strout lost her mother two years ago, her saving grace has been her quirky little family in the grief support group she joined as a freshman. Jay, Kate, and Noah understand her pain; each lost a loved one, and they’ve stuck together in spite of their differences, united by tragedies only they understand. When Riley thinks she spots her mother shopping in a grocery store, she fears she is suffering some sort of post-traumatic stress. Then Jay and Kate report similar experiences. Only Noah hasn’t had some kind of vision, which is perhaps why he’s become so skeptical and distant. When Noah disappears, Riley fears she’s lost another loved one. As they frantically search for him, she, Kate, and Jay are drawn into the mystery surrounding a relic that belonged to Jay’s dead father and contains clues about the afterlife. Riley finds herself wrestling with her feelings for both Noah and Jay—which have become clear only in Noah’s absence. If Riley is to help those she loves, and herself, she must set things right with the one she’s lost.

About The Author: Emily France graduated from Brown University before going on to law school, where she was the editor-in-chief of the law review. She finds creative inspiration in all things spiritual, from sitting with Benedictine monks for 4 a.m. vigils in a Rocky Mountain monastery to trekking to Buddhist and Hindu temples in India. Now she writes full-time and lives with her husband and their fearless Tibetan Spaniel in sunny Colorado—the closest place to Nirvana she’s found. Signs of You is her debut novel.

Which books are you looking forward to reading that are coming out in July? Do any of these sound interesting to read to you? Let me know in the comments!