On Friday, my mom and I watched the movie The 33. I have been wanting to watch this movie for a while so I was excited to finally watch it. Let me tell you one thing, I’m not an emotional person and this movie made me cry. So if you are emotional, you better bring yourself some tissues. 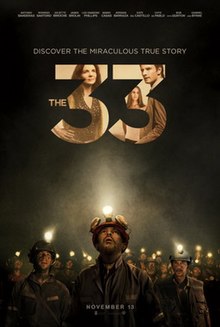 In 2010, the eyes of the world turned to Chile, where 33 miners had been buried alive by the catastrophic explosion and collapse of a 100-year-old gold and copper mine. Over the next 69 days, an international team worked night and day in a desperate attempt to rescue the trapped men as their families and friends, as well as millions of people globally, waited and watched anxiously for any sign of hope. But 200 stories beneath the surface, in the suffocating heat and with tensions rising, provisions – and time – were quickly running out.

The 2010 Copiapó mining accident, also known then as the “Chilean mining accident”, began in the afternoon of Thursday, 5 August 2010 as a significant cave-in at the troubled 121-year-old San José copper–gold mine. The mine is located in the Atacama Desert about 45 kilometers (28 mi) north of the regional capital of Copiapó, in northern Chile. The buried men, who became known as “Los 33” (“The 33”), were trapped 700 meters (2,300 ft) underground and about 5 kilometers (3 mi) from the mine’s entrance via spiraling underground service ramps. The mixed crew of experienced miners and technical support personnel, with less experience working underground, survived for a record 69 days deep underground before their rescue. Previous geological instability at the old mine and a long record of safety violations for the mine’s owners had resulted in a series of fines and accidents, including eight deaths, during the dozen years leading up to this accident. As a result of the mine’s notorious history, it was originally thought that the workers had probably not survived the collapse or would starve to death before they were found, if ever.

The country of Chile had just endured the 2010 Chile earthquake and its associated tsunami less than six months before the accident. The Chilean people’s strong empathy for the workers and their grief-stricken families and the nation’s tremendous outpouring of public concern led the national government to take over the faltering search and rescue operation from the mine’s financially strapped owners, privately held San Esteban Mining Company. With the significant resources that the state-owned mining company, Codelco, was able to marshal, eight exploratory boreholes were hastily drilled. Seventeen days after the accident, on 22 August, a note written in bold red letters appeared taped to a drill bit when it was pulled to the surface after penetrating an area believed to be accessible to the trapped workers. It read simply “Estamos bien en el refugio, los 33” (English: “We are well in the shelter, the 33 of us”). Chileans demanded that Chile’s leaders find a way to bring the trapped workers safely home to their waiting families.

Once the rescuers, and the world, knew that the men were alive, Chile implemented a comprehensive plan to both care for the workers during their entrapment and to rescue the miners from the depths. The plan included the deployment of three large, international drilling rig teams, nearly every Chilean government ministry, the expertise of the NASA space agency and more than a dozen multi-national corporations from nearly every continent. After 69 days trapped deep underground, all 33 men were brought safely to the surface on 13 October 2010 by a winching operation that lasted nearly 24 hours. After winching the last trapped miner to the surface, the mine rescue paramedics, the best available drawn from multiple national agencies and military services, all still underground, held up a sign for the TV cameras reading “Misión cumplida Chile” (English: ““Mission accomplished Chile”), which was seen by a TV and internet audience estimated at more than 1 billion viewers around the world watching the rescue live.

All 33 miners were rescued, almost all in good medical condition with no long-term physical effects anticipated. Two miners were found to be suffering from silicosis, one of whom also had pneumonia, while others had dental infections and corneal problems. Three of the men underwent immediate surgery under general anesthesia for their dental problems. Private donations covered one-third of the US$20 million cost of the rescue, with the rest coming from the mine owners and the government. Various lawsuits and investigations resulting from the accident were still pending as of March 2011. On 1 August 2013, after a three-year investigation, it ended with no charges filed.

You could tell that these men have gained a close relationship to each other. The realness that these actors added to the movie made it feel like you were watching it happen, and not just you watching the movies. The tears will start to come when you realize that they have included real footage from the scene. They add footage of all the people waiting for these men to come and them working on bringing the men up. Even though most people know the story, and they watch it, they don’t realize while watching it what is coming up. This movie is amazingly done.

The Book That Inspired the Movie:

When the San Jose mine collapsed outside of Copiapo, Chile, in August 2010, it trapped thirty-three miners beneath thousands of feet of rock for a record-breaking sixty-nine days. The entire world watched what transpired above-ground during the grueling and protracted rescue, but the saga of the miners’ experiences below the Earth’s surface and the lives that led them there has never been heard until now. For “Deep Down Dark,” the Pulitzer Prize-winning journalist Hector Tobar received exclusive access to the miners and their tales. These thirty-three men came to think of the mine, a cavern inflicting constant and thundering aural torment, as a kind of coffin, and as a church where they sought redemption through prayer. Even while still buried, they all agreed that if by some miracle any of them escaped alive, they would share their story only collectively. Hector Tobar was the person they chose to hear, and now to tell, that story. The result is a masterwork or narrative journalism–a riveting, at times shocking, emotionally textured account of a singular human event. “Deep Down Dark” brings to haunting, tactile life the experience of being imprisoned inside a mountain of stone, the horror of being slowly consumed by hunger, and the spiritual and mystical elements that surrounded working in such a dangerous place. In its stirring final chapters, it captures the profound way in which the lives of everyone involved in the disaster were forever changed.”

If you are someone who really doesn’t care for history or learning, this is not your movie. The movie is a longer one but it is one of the best movies I have ever seen in my life. I would recommend this movie to someone who wants to actually get to know more about what happened during the whole thing and wants a good emotional movie. If you have younger kids/siblings, they might not want to sit through a movie this long and everything that it is about but that’s really it. I believe everyone should watch this movie because it will change you. It will make you feel like a totally different movie.

Have you seen this movie? How do you feel about this event? Do you remember watching this event happening because I do and I am only 15. What movie do you want me to watch and review? Let me know your thoughts in the comments!