April was a pretty good month if I say so myself. I read a few books and bought only a few books (that’s because I know who the pushover parent is and when things are on sale). I only bought 24 books and read 7 books. I’m not going to go into too much detail with the books I bought because there are so many of them. 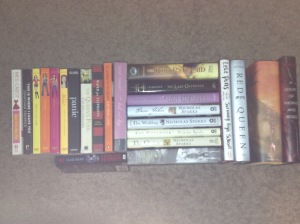 As the books I read in April, I did pretty well with 7 but I wish that it would have been a little more but whatever. I am hoping to get 10 or 12 done in May but who knows with exams coming on June 1st.

I think my favorite book I read this month would have to be This Is Where I Leave You by: Jonathan Tropper. The book was amazing and funny and everything I needed. The book made me laugh and then cry in the same chapter. Don’t let me start with the scene when someone happens to be sleeping with someone’s wife. It is hilarious.

What book was your favorite that you read in April? How do you see May as a reading month? Let me know in the comments! And I know that it is May 4th, but I really wanted to post this.