Last night, I went to Target and I got the movie The Visit. I don’t know if it is a bad thing that I was more excited about seeing that movie on the shelf than Mockingjay Part 2. Of course I wanted to get both of them but I didn’t. I got home, ate some of Harris Teeter’s BBQ chicken (because I love their chicken) and watched The Visit by myself in my room. I know that the movie isn’t based off of a book or anything but I felt like I wanted to put out my opinion on the movie! 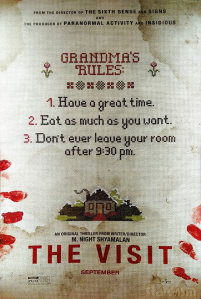 The teenager Becca, who wants to be a filmmaker, and her younger brother Tyler, who wants to be a rapper, live with their single mother that left home many years ago and has estranged parents. One day, their grandparents invite them to spend a week in their farm and they accept the invitation to let their mother travel alone with her boyfriend. Becca decides to make a documentary of their visit and Tyler and she are welcomed by their grandparents. Soon they note the weird behavior of Nana and Pop Pop and they believe the reason is their old age. Nana accidentally damages the camera of Becca’s notebook and they contact their mother only using the audio. When she fixes the device, they discover a dark and disturbing secret about their grandparents.

Why I Wanted To Watch It:

I have always been interested in the spooky/horror movies and this one is perfect. I saw the trailer on TV and it caught my eye. I loved the fact that I really didn’t know any of the actors and it seemed like they all got along in the trailer. I was really excited to see the part when the Grandmother wants the granddaughter, Becca, to get into the oven and clean it. I was really hoping that she was going to turn on the oven. From then on, I really wanted to see this movie.

I really loved the scene when Tyler goes into the shed to actually see what is in it. I was hoping the whole time when I was watching it, he would turn around and find his ‘grandfather’ behind him but he never did. I loved when Tyler goes over to the table with the mystery stuff and he opens it up to find it wad diapers with poop in them. I loved when he opens it and sees it and then he goes and runs. You think that it was a really little scene at first but in reality, you see it again, at the ending when the grandfather tries to kill them and he puts it in Tyler’s face. I thought that was pretty funny.

I guess that this really isn’t a scene because it happened through the whole thing but the fact that all the swearing happened from Tyler, the 13 year old. I get the fact that he was upset and really spooked out but why couldn’t it been more Becca, since she is older. I didn’t really have a problem with it, but it was the one thing that stood out to me more than other things.

Feelings During the Movie:

I really wasn’t scared in the movie. it was more of the anticipation on when something is going to happen. For example, I knew that we was going to see the Grandmother scratch the wall and see her upclose and personal with the camera. I knew from the beginning that they really weren’t their grandparents because I was spoiled by someone at school. The one thing I did not know was that the ones that pretended to be them was legal psychos. When Becca was going through the basement and actually found their grandparents, I died. I was not expecting to see both the grandparents AND the answer about the fake grandparents. For the most part, I found the movie more humorous than scary. I don’t use I enjoy things that are spooky or because the whole thing was funny. I only was scared when Becca and Tyler were playing under the house and the grandmother is coming to get them both and when the Grandmother gets in front of the camera. I knew that it was coming but I didn’t know when.

Who Would You Recommend This To:

I would recommend this movie to any who is looking for a thrilling movie. Someone who is looking more a movie that is only about 25% scary and the other 75% funny. The Visit really doesn’t have disturbing scenes for kids 10 and above. There are scenes when you see the grandmother naked, puking and some swearing, but other than that, you should be fine to watch it. If you do get scared really easily, I would recommend you DON’T watch this movie because you might be scared from the very beginning.

Have you seen this movie? Do you want to see this movie at all? What is your favorite type of movie? Let me know down in the comments below!